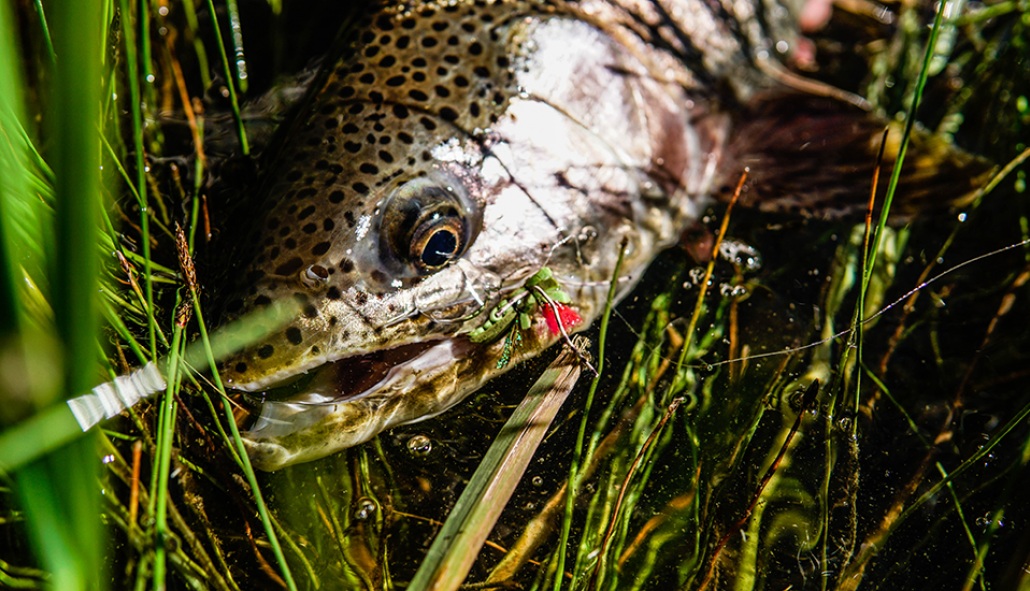 Captain Rob of Pyramid Fly Company takes his fishing very seriously. A fact we can respect. When the text reads, "Sunrise is at 5:34 AM. The lakes are 142 miles from Fort Collins. I'd like to leave by 4 AM." That means, 4 AM is late. And you don't want to be late. I'll be honest. I'm not sure if we were on time or not. That 1:30 AM alarm did a real number on my short-term memory. Tanner soaks it in from a high point.

Shameless Plug. Get you some of this party hat action. It is summer time. Party Hats and Hoppers...go together like Prairie Lakes and Hoppers. After a slow start to the morning, this fish washed me of my early hook set sins and came back a second time to eat my olive Parachute Hopper. If you squint your eyes, you can make out the wind farm in the background. Notice that the turbines aren't spinning. In Southeastern Wyoming. Weird. Tanner casts to a shallow water cruiser. Hoping his fly is the right fly. Captain Rob put the biscuit in the basket on this early morning opportunity and slipped a beauty into the Rising Net. Tanner and Gus walking the bank looking for cruisers. Is that my old 2001 Blue Honda Accord? I thought I donated Old Blue to charity. I don't know about y'all, but if I say I'm going back to the truck, that means I'm gonna throw at least 50 more casts. Captain Rob agrees.

We got back to the truck. Luckily, some ice cold Tecates were waiting for us. In the words of Tanner Smith, "They say ice lasts for days in the Yeti Hopper Two... However, the beer never lasts long enough to actually know if that's true or not." We took a quick break from fishing to check out Captain Rob's trailer on the property. If I told you how much he paid for the membership, the trailer and the (not-pictured) boat, I'd have to kill you. After a quick break, Captain Rob cracked the seal on our afternoon session. And hooked up again. And the filled the net again. This chunky rainbow took him to backing. He called it an average fish before it did so. I was running wind sprints back and forth from Captain Rob and Tanner, as the fishing in the mid-afternoon really turned on. If you know me, you know wind sprints are really my thing. Who just so happened to eat the Fat Albert. Hey! Hey! Hey! A quick drive to another productive bank gave us some short term shelter from the sun and more importantly the mosquitoes, who were seemed to have the desire to make this "MY PERSONAL HELL!" A nice fish to end the day on. Light was getting low and it had been a couple hours (all day) since Tanner and I had eaten something proper. A stop at the Wendy's in Laramie off I-80 was in our future.