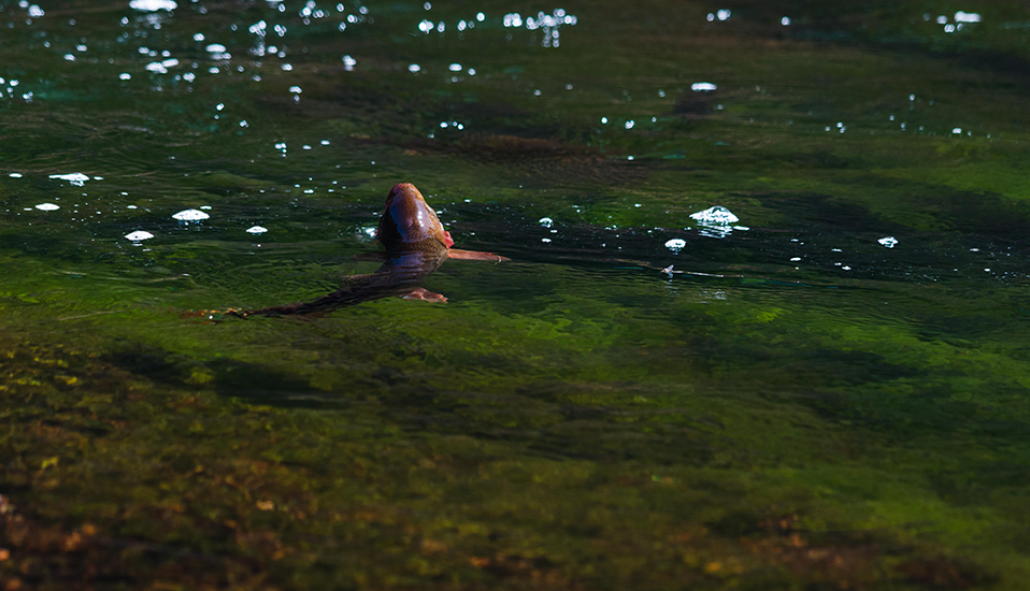 It was a windy Tuesday afternoon on the South Platte. Thankfully, the bugs and fish didn't seem to care much. In between gusts of 50 mph, there were still enough bugs on the water that seemingly every Deckers trout was elevated and feeding on dries and emergers. Midges in the morning and blue-wings in the afternoon. Truth is, I don't have Tuesdays off, but Dave Lovell, our outfitting and education manager, and I were on the water for work. Dave had to return to Denver and I decided to stick around and shoot some pictures and B-roll for some upcoming education videos (stay tuned to our Youtube page for those). The SETTING: Those mid-stream boulders and the deeper buckets behind them held their fair share of dry fly eating rainbows and browns. It was mid-afternoon and the number of blue-winged olives was increasing as the sun started to fade behind the hills. There were quite a few adult BWOs present. I ate a couple...accidentally. I looked upstream and saw a boil and a tail. Followed by a snout...this fish was actively feeding and chasing down dries that passed him by.

I moved into a better position to try and take some photos of that trout rising to Blue-Wings...for content. Zoom in and you can see a BWO that's breathing it's last breath. Question: Do Blue-Winged Olives breath? Maybe I should have paid more attention in school. This process repeated countless number of times as this well-proportioned Deckers trout was truly happy. Richard (the nickname I gave that trout) turned aggressively to a BWO dun. I took pictures of Richard rising for easily 25 minutes. He was the king of his domain. Any blue-winged olive in a 24-inch radius was getting got. 25 minutes of watching this fish feed proved to be too much for this man. I hiked back to the truck and grabbed some gear. Luckily, Dave left his bag...and he left his dry flies. I picked out a size 20...ish Extended Body BWO dry. Tied on some 5x Rio Powerflex and got ready to cast at the most opportune time. The all-new Ross Evolution LTX Fly Reel was looking right in the light. I had the SAGE Foundation 905 Fly Rod in my truck. This all-around performer delivered the right cast at the right time. I'd never used the Shimazaki Dry Shake Spray before...but, I've heard tales of it's effectiveness. One afternoon of dry fly fishing in, I'm a believer. I won't leave my house with this Dry Shake Spray in my bag. I'd rigged up and I was ready to duff that cast and spook the run filled with chowing fish.

One cast and a couple of aerial displays later, this Richard the healthy Deckers rainbow found his way into my hands.

The old self-timer grip-and-grin for proofs-sake. I'd like to think that Richard the trout ate on my first cast because I put it right in his feeding lane. If I'm being honest with myself, I was off to the right, but when you're lucky enough to find un-spooked, feeding fish, they'll be awful forgiving. I'm thankful that he was willing to move that extra 6 inches for my extended body BWO dry. Bye now. The buck shows off his ability to blend in. The remainder of the afternoon was one to remember, as they continued to eat dries until around 4 PM. When the hatch was finally finished that was my cue to head back to the big city.