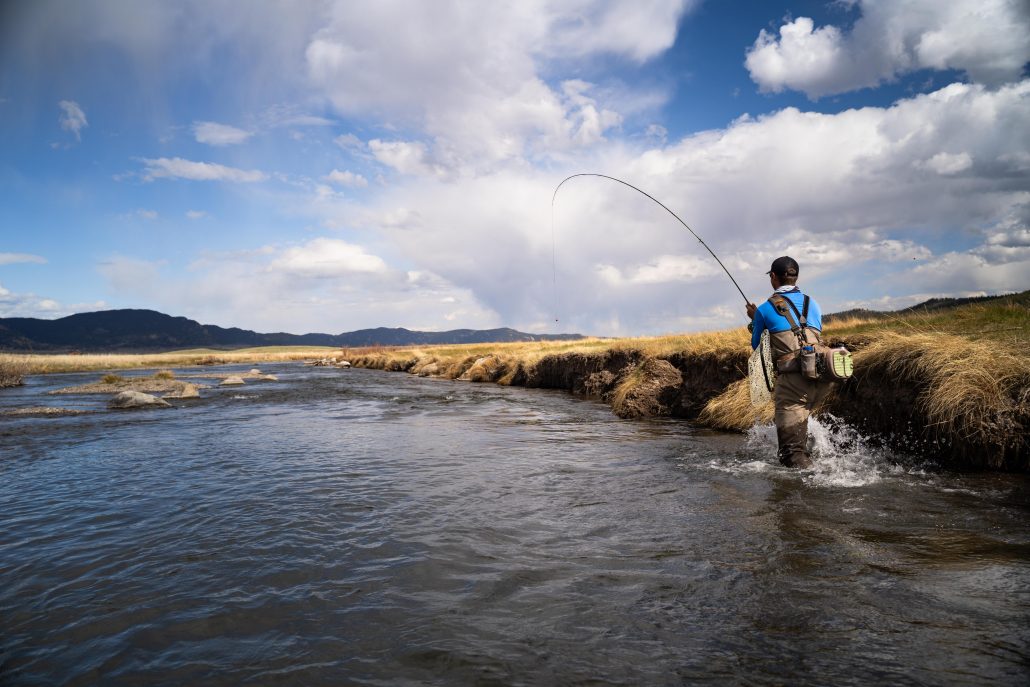 "The Dream or the Cheese?" I asked Danny Strine, a guide for Trouts who picked up a day of work in the shop earlier this week. At that point, the South Platte below Cheesman Reservoir had bumped to above 300 cfs (at that point) and the idea of throwing big flies to the normally picky Canyon trout was certainly an appealing one. Danny responded, "Dream with some afternoon time on Spinney?"

I was game for some afternoon stillwater action. After all, stillwaters can always surprise you, especially this time of year. "Yup. That. Let's do that." We met at the Fort and made our way up 285 catching up on life, trying to anticipate how the day would play out, and hatching outlandish plans about DIY trips to the salt all over the world. The phrase "You know flights to Mexico actually aren't that bad," was muttered more than once during our two-hour drive.

"If we're done on the Dream by 4, we can still fish some of the good spots at Spinney," I suggested. Danny was game for pretty much anything...but, there's not many places Danny loves more than the Dream Stream. Pulling him from it's bends can be tough, even if it was his idea to hit up Spinney. "We'll play it by ear," he responded. "Fair, that's fair," I answered.

We got to South Park a little later than expected...we had to pick up some cold beer after all. Danny picks off a confidence fly for his rig from an earlier guide trip.

In typical South Park fashion, we parked, stepped out of the truck and it was calmer than the Dude. Kidding. We dropped the tailgate...and it got real windy, real fast.

We got to the water. Danny made a cast and found one.

A looker at that.

Putting a bend in his Clearwater.

Another brown who like-a the caddis.

It was getting a bit ridiculous. Danny scoops a solid cutbow out of the same drift.

A look at the stragglers that call the outside of Strine's Fishpond Gunnison Guide Pack.

They say don't leave fish to find fish. Strine made another cast into the riffle-drop off.

A look at a rainbow fish.

We gave that run a rest and mosied on downstream with this here speedgoat.

Cloud cover was moving through. South Park was showing off.

"The suckers are running," ole Downstream Danny proclaimed from the high bank. Yes, they were. Suckers were everywhere.

Danny picked off another brown in the riffley water.

Fishing was good enough for the camera man to get some quality casts in. A Buckskin fooled this Snake River Cutthroat.

There were some dark shapes in this run, but the clouds made it hard to make out the difference between suckers and trout. Strine got all low-profile and stealthy and made a couple casts.

So, did I. They were both suckers.

It was inching towards 4 PM and we decided to head back up to the car with the intention of hitting some of our favorite runs before heading over to Spinney.

We stopped. Saw some suckers...looked closely and saw some trout. Quite a few good trout were holding in a run just below some spawning suckers. They were moving hard back and forth in the run and eating A LOT. Surely, they were eating sucker eggs, we thought. Nope. Blue-winged Olive Emergers.

I tried getting up on the high bank to verify. Nope. Couldn't verify.

Strine had to chase this "beast" downstream.

And plucked the Blue-Wing out of the corner pocket.

Strine was right. It was a nice one.

By this time, it was getting late. But, like say goes, "Don't leave fish to find fish." We found quite a few. Soon enough, it was 6 PM and Spinney wasn't in the cards. We weren't leaving all these troots.

Another one for the camera guy.

It was getting a little ridiculous.

Danny wrangles another one.

Fishing was good enough for me to get weird with the camera. Slow-shutter speed action captures are always crowd pleasers.

As the sun started to set over South Park, Danny made a couple more casts.

And caught a couple more fish on his Orvis Hydros.

Remember the beers we bought on the way up. I didn't. Strine did. Bye now.