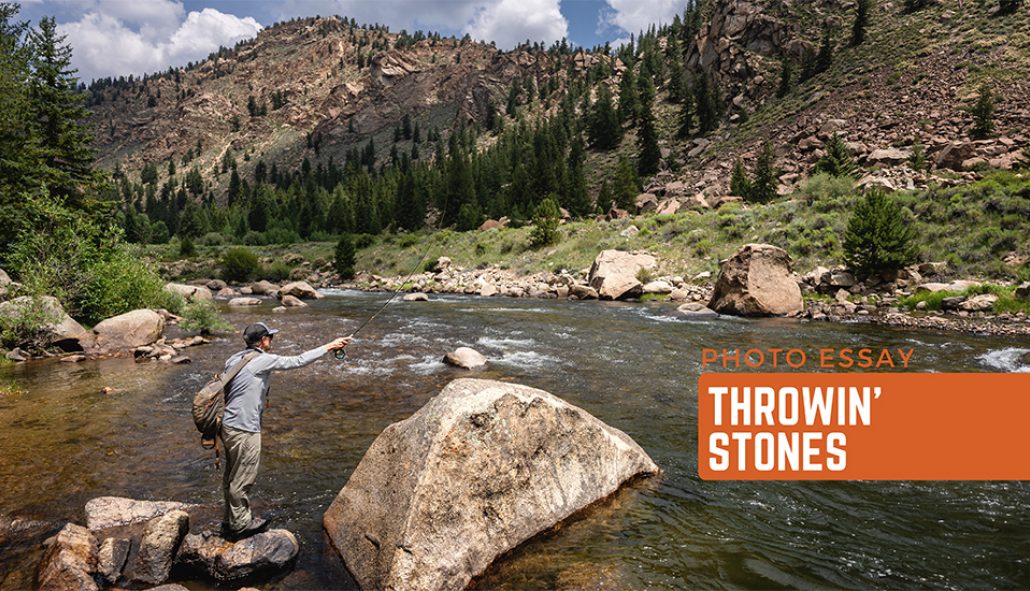 It'd been a minute since I'd spent some time on the water with Zeke (Regional Store Manager & Outfitting Manager at Trouts Frisco) and flows were looking pretty nice on the Arkansas. I shot Zeke a last minute, hail mary text... "Zeke, can you get out on Tuesday?" It was 12 PM on a Monday. I felt like Gordon Hayward in the 2010 Final Four. It was the fishing version of desperation half-court heave. Much to my surprise, my text banked right in and Zeke replied..."Sure, I think I can pull that off."

We met up at our Frisco shop, grabbed a breakfast burrito on Main Street and hit the road. After a couple of curves, turns, and a weird stop at a grocery store in Leadville, we found ourselves cruising a dirt road lined with pine trees.

Ole Zeke-y likey to wet wade-y. He is a boat captain after all and he puts away the waders until those overnight lows start creeping down in early fall. He was prepped and ready for some wet wading and threw on his Guide Guard socks.

I offered up my 4 weight Winston Pure for the occasion. Figured dry flies would be on the menu and Zeke obliged. He threw the four weight together, locked up the truck and we sauntered down the off-road track.

We "gracefully" slid down the hill and did the small stream limbo as we worked our way towards the bankside willows. Now, I should mention that we're not the brightest bulbs in the box, but even we could figure out that caddis dries were probably a good choice on this July morning. These biggish, tan caddis-looking flies were everywhere. Skating across the water. Fluttering in the bushes.

Big species identifying bug guy, I am not. But, I've heard that there are upwards of 40 species of caddis in the Arkansas River. That's an awful lot of aquatic life in that rumbling, stumbling, bumbling river. While I can confidently not identify this big tan caddis that we were seeing, I can confirm that fish liked them and some of Zeke's Sedge/Spruce Moth/Caddis flies.

It's always good to get some instant positive feedback. A couple of casts in, Zeke was wrangling a diminutive, but wild brown to hand. We've all had those days when you catch a fish early and then hang a big honking zero on the board for the next eight hours. While it's easy to get a little superstitious about how the day is going to turn out, it was pretty clear that the Arkansas was ready to party.

We kept working upstream. Zeke would throw long casts, short casts, downstream reach casts to soft water on the opposite bank. The Pure was handling business.

Dry-dropper fishing on the Arkansas when it's in it's prime is some of the most engaging fishing you can experience. It's fair to expect a violent slash at your dry fly in any eddy, seam, drop-off, pillow or pocket.

Zeke waded to the middle and found another pocket filled with a couple of fish.

BUG SEX! HECK YEAH! I was hanging on the bank, snapping some shots of Zeke working a pocket when I felt the distinctive stonefly scurry across the back of my neck. I turned to investigate and the willows were filled with Golden Stones.

Now, we all like a good caddis dry fly eat...but, a big bushy stonefly dry is simply more fun to fish. Zeke crossed to re-rig. He grabbed a Yellow Stimulator and dunked it in his economy sized Shimazaki Dry Shake. It was THROWIN' STONES time.

There was bound to be a fish in every pocket, every riffle, every piece of diamond chop. Fishing with those kinds of expectations is generally a recipe for disappointment, but not on this July morning.

Now, I'm a big fan of a double dry rig on the Arkansas this time of year. But, Zeke can't resist throwing a nymph 18-24" below his big dry fly. This brown took the Prince.

Zeke took in a view or two before we called it for the day. Summer days picking pockets with big bushy dry flies is about as good as it gets. They were everywhere they were supposed to be and those Arkansas browns made sure no food passed them up. Bye now.