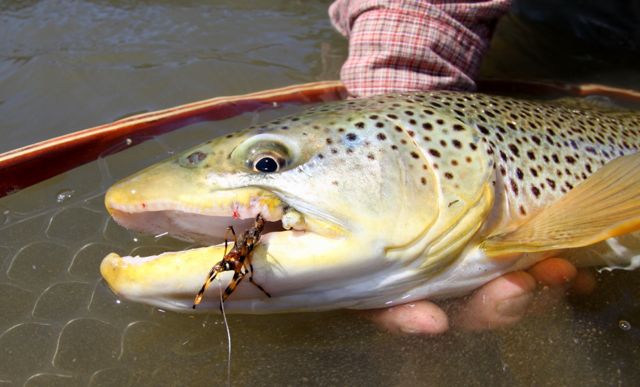 Here’s what we have to say about the Smethurst Stone Bomb:

“If you're looking for a dirty stonefly pattern, look no further than the Smethurst Stone Bomb. Heavy, durable and realistic, this fly has it all. Nymph is deep or behind a big bushy hopper, either way it's a fish catching machine.

“Frank Smethurst is well known for his work in Running Down The Man, and Eastern Rises (two cult classic fly fishing films), and makes his living from his work as a fly fishing industry representative for Scott Fly Rods, Nautilus Fly Reels, Boulder Boat Works and other great fly fishing products. He's as fishy as they come, is an amazingly accomplished angler, and you can bet that any fly with his name on it has been thoroughly tested. The "bomb" series is a prime example of his talent and innovation, and are a must have fly for any Western Trout angler.”

Here is what Adam Trina, Owner of the Montana Fly Company has to say about the Bomb Squad patterns:

“Most nymph patterns on the market were either no-bead patterns or single-bead patterns, and most of the single-bead patterns were brass, not Tungsten,” said Adam Trina, Owner of the Montana Fly Company. “The majority of Frank’s Bomb patterns have 2 Tungsten beads, and are designed to ride hook up, allowing the angler to use them as their lead fly, right on the bottom, minimizing the need for split shot.“

Adam pointed out three things that really stood out and that caught his attention when he initially evaluated the pattern:

1) There are two tungsten beads on most patterns, with one bead being smaller than the other to give a taper to the thorax. On the midge bombs there is only one bead, but it is an oversized bead (1 size larger than normal for that hook).

2) They are designed with the weight positioned on the hook in a way that makes the hook ride up, minimizing snagging on debris.

3) The patterns use Sexy Floss exclusively because of the vibrant sheen, increased flexibility, and better UV resistance over regular rubber.

Here is what Frank said recently about the evolution and effectiveness of the pattern in a recent interview with Fly Rod & Reel Magazine:

“When I first saw a need for these flies I was guiding, and we needed flies that would get down quickly for our clients,” said Smethurst. “A couple of my fellow guides and I were tying these special orange Halfbacks that were among the first flies that I used with enough weight to get them down into that fast and deep water. Additional split-shot was a dangerous float-fishing accessory in those Class II to IV rapids, and with these custom Halfbacks we didn’t need shot. These bigger nymphs were also covered in hackle and they flipped over upside down. Though it was unintentional on our part, I noticed that they crushed fish, and stayed out of snag trouble during long drifts.”

Get them in the shop while they are hot - or purchase the Stone Bomb pattern online at our store. If you have any questions, don't hesitate to give us a call here at the shop: 877.464.0034.