ROAR Attempts to Block the Controversial &#8220;Over The River&#8221; Project 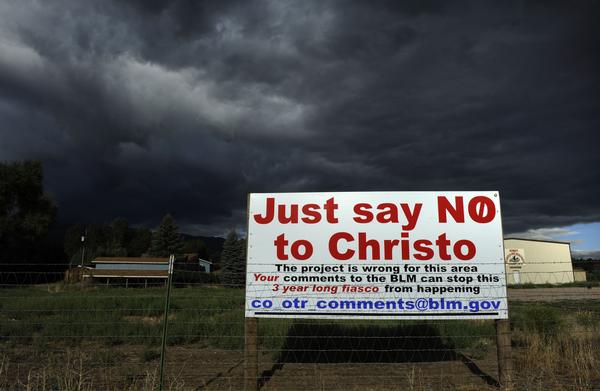 DENVER—Opponents of the artist Christo's plan to suspend giant fabric panels over parts of the scenic Arkansas River filed a lawsuit Wednesday arguing that federal officials violated environmental laws in deciding last year to approve his Over the River project.

A group of University of Denver law students filed suit in federal court on behalf of Rags Over the Arkansas River, or ROAR, just as Christo and his team were making their case before Fremont County officials considering one of the local permits required for it. The county was holding public hearings Wednesday and Thursday on Christo's permit request.

Christo's team hopes to start construction this year and display Over the River for two weeks, possibly as early as August 2014, before dismantling it.

Christo's team hadn't seen the lawsuit yet but said the BLM conducted an extensive, thorough, 2.5-year review in a process that considered hundreds of public comments before issuing its decision, which includes more than 100 measures to mitigate impacts on traffic, safety and wildlife. "We think it's a thorough study that will withstand legal scrutiny," said Over the River spokesman Steve Coffin.

ROAR members had sent in comments of their own to the BLM. "We've been ignored," Anzelmo said.

read the rest of this article at denverpost.com