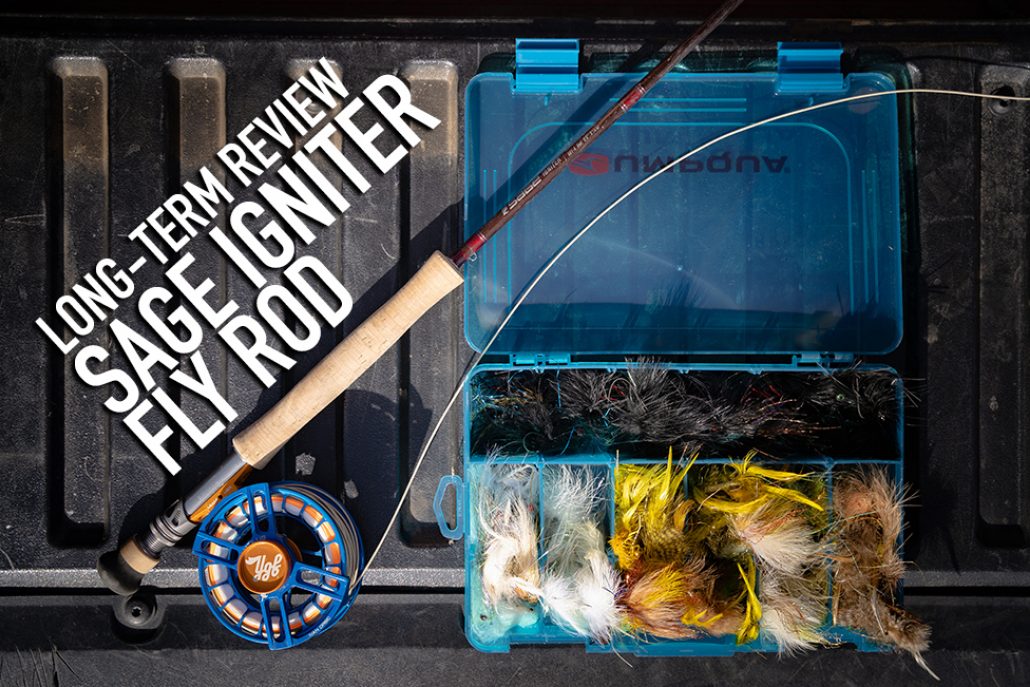 I picked up the 9-foot 6-weight with fighting butt (691-4) version of the Sage IGNITER in October 2018 and have thrown big streamers, big nymph rigs, intermediate and sinking lines throughout the Colorado, Wyoming, and Montana over the last six months and have been nothing but impressed with how this rod throws big flies through big wind.

The Sage IGNITER features Sage's KonneticHD Technology which is a higher density (HD) fiber composite, that results in lighter, stronger blanks which deliver unmatched recovery, energy transfer, and line/loop control. As the follow up to the Sage METHOD, the IGNITER is a little toned down in it's appearance and features a Chipotle blank with Cayenne thread wraps and Gunmetal trim wraps. The IGNITER features Fuji ceramic stripper guides, hard chromed snake guides and a black powder coated aluminum rod tube.

As I mentioned before, I've fished the IGNITER over the last six months throughout Colorado, Wyoming, and Montana. I paired the IGNITER 691-4 with floating line (Scientific Anglers Mastery MPX WF7F), intermediate line (INTOUCH BIG NASTY 3D SINK TIP WF6), and a full sinking line (INTOUCH DEEP 7 WF7). Fished on the big, wide western waters of the North Platte, out of the boat on the Colorado River, on the Beaverhead and Big Hole Rivers in Southwestern Montana, and on early season stillwaters in Colorado, the IGNITER has been tested on a wide variety of water and weather conditions. I say that to say this...I've done my best to put this rod through it's paces before putting this review together. $900 is an investment for a fly rod, especially a fly rod that is meant for very specific conditions. Is it worth it? Without further adieu, here are my takeaways:

This rod shines when casting big flies at distances from 30 feet to forever. When fishing the Mile this past winter, I stepped in behind my friend who was swinging a two-hander through a classic wide North Platte run. Cody was swinging a white & gold streamer and picked a couple of fish off of the far bank. Being a little selfish and self-confident, I wanted to see if a black streamer would do the job as well. The cast required was easily 85 feet. Not a cast I would normally throw or even think about throwing, especially with winds gusting into the 40s. But, as the saying goes, you only live once. I was throwing the InTouch Big Nasty Sink Tip fly line - which has a front loaded 30' head. With a false cast or two and I was able to shoot the fly line with relative ease considering the conditions. A tight loop cut through that Wyoming wind and delivered the articulated streamer where it needed to be. At that point, I could see the vision of using a super-fast rod like the IGNITER.

It takes some time to get used to the action of the IGNITER. However, when I stayed on top of my timing on my forward and back casts, I was able to generate impressive line speed and turnover the biggest of flies without much extra muscle. Roll casting big streamers in tight quarters was also a breeze. As such, aggressive fly line tapers like the Big Nasty, RIO Grand, and SA Anadro load the rod effectively. Of the three lines I fished with this rod, the InTouch Big Nasty taper matched best. With such an aggressive head, I was able to take advantage of the rod's super fast action and shoot line accurately on a consistent basis. If we're being honest, this 691 acts more like a 7 weight than a 6 weight.

Fishing streamers effectively out of a boat requires a high volume of accurate casts and wasting time false casting to make casts at distance. The Igniter excelled in this respect. It could pick up and shoot line quickly and minimized the need for false casts. I found this same level of performance when casting big stillwater nymphing rigs in the wind at Spinney this past weekend. Time and time again, I challenged this rod to perform under adverse conditions. Bottom line - if it's windy (which it tends to be in the Rocky Mountains...all the time) and you're fishing big flies, the IGNITER will deliver.

FEEL. There's not much, especially when casting within 30 feet. The rod needs an aggressive taper to load appropriately and there are times when making a 20-foot cast can be cumbersome. Do I think you need a ton of feel when throwing big streamers? Ehh, probably not, but a little more feedback when casting in close wouldn't be the worst.

Additionally, the IGNITER is not the most forgiving casting rod and requires you to be on your P's and Q's when casting. If you're early or late to start your cast, your loop can fall apart a bit. This rod isn't meant for a beginner caster. It's a tool for intermediate and expert casters to utilize in specific, challenging conditions.

Sage is known for their fast action rods and the IGNITER might be the fastest I've cast. This rod isn't meant for technical tailwaters. It's not meant for throwing small dry flies. It's not meant for size 20s and 4-5-6x. It's meant for big flies and cutting through big wind. It was designed and manufactured to shoot line accurately in the worst of conditions. And the IGNITER does just that. The IGNITER is not a great all-around fly rod. But, if I'm swinging streamers on the Miracle Mile, tossing a full sinking line and an articulated streamer out of drift boat on the Colorado, or fishing indicator rigs on a big windy stillwater, I'm reaching for my 691-4 IGNITER every time.