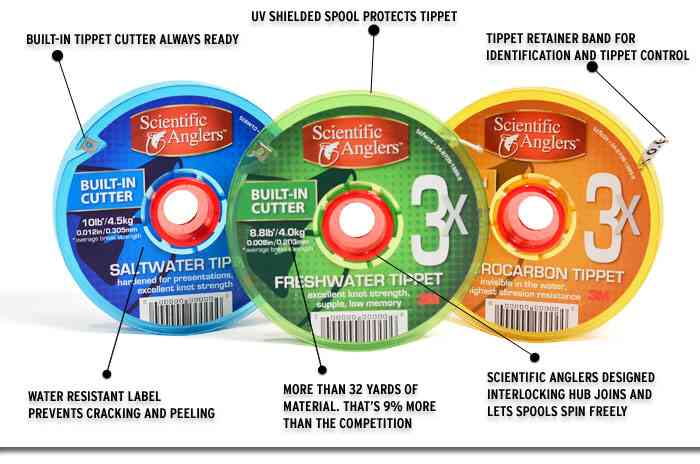 Scientific Anglers is pleased to announce the debut of their redesigned tippet spool and updated label graphics. The new spool features an independent, free wheeling hub that allows the tippet spool to spin freely when joined together. The hub can be retracted to become flush with the spool body when used alone, or with other tippet spools on the market. Each of the spools are color coded to correspond to the tippet material type. Green for freshwater nylon, blue for saltwater hard mono, and orange for fluorocarbon. The spools are also molded with UV inhibitors to help protect the tippet from degenerating UV rays. Built into the spool rim is a razor to cut the material right where you want it. The tippet material is managed by a color coded tippet retainer band that also has the size of the material printed on it.

They have also upped the ante at Scientific Anglers by giving you more of our award winning material than the competition. Each spool will include 30 meters of material which is approximately 9% more than our competitors.

The new tippet will be launched in four separate waves:

We are very excited about this new tippet spool technology, and we trust that it will help elevate the SA brand to the level it deserves given its ulta high quality leader and tippet material.

Want to see these new spools in action? Check out this short video compliments of Scientific Anglers: