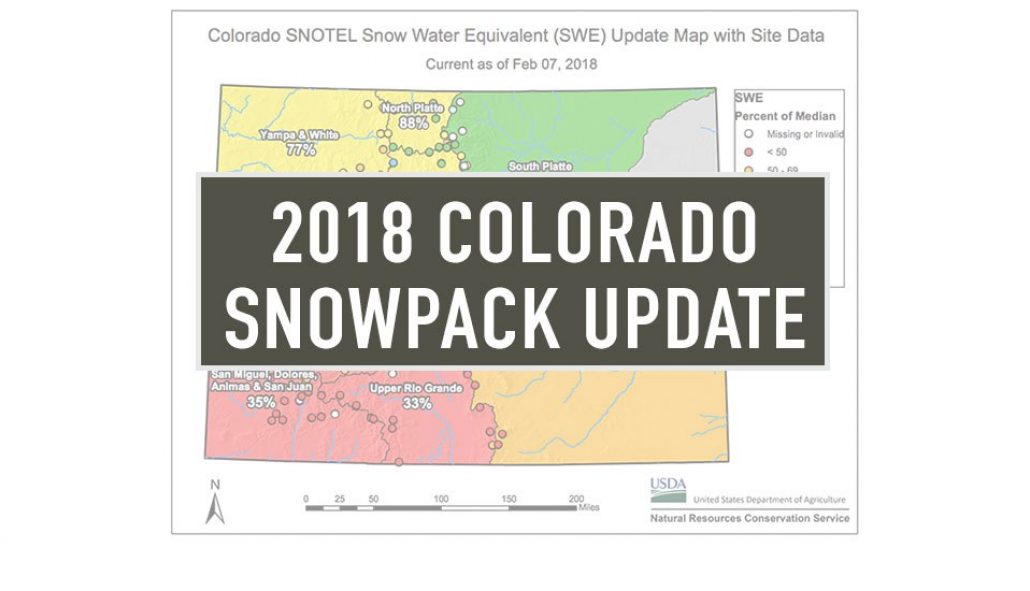 The past five years in Colorado have provided abundant snowpacks where the biggest concern wasn’t “do we have enough?”, but “we have entirely too much!”. The realities of 100%+ snowpack have been the norm, and much like our current stock market, the inevitable “adjustment” may be looming. But much like any market adjustment, it is important to really analyze the “why’s” in order to understand what is next to come.

Currently, Colorado is experiencing one of the driest winters on record. It is important to note that I used the term “one of," as this is not the worst winter we have seen in recent record. Yes, we haven’t seen nearly as much snowfall as we would like, but in comparison, this winter is tracking eerily similar to that of 2012. While I use the term eerily, the reality is that while we had a less than ideal snowpack in 2012, the resulting fishing season was quite good.

This brings me to my next point, which is; be cognizant of how the news and media are interpreting this situation. Much of the news surrounding our current winter and subsequent snowpack is based solely on the effects it’s currently having on the ski industry and the present ski season. Let’s be crystal clear on this topic, the current winter we are experiencing is not good for our state’s ski industry. The reality is that this industry operates on a finite amount of time, meaning that there are only so many days ski resorts can operate, and people can go skiing. Just the other day, I received an email from my ski pass's provider, noting that I only had 76 days left to use my pass. Think about it, this is a clear expiration date that both they AND I are operating off of. So when you consider this in combination with the less than ideal winter we are having, it is no surprise that people are concerned and are becoming more vocal.

But, let’s switch industries and contemplate how this year’s winter is ultimately shaping up from the standpoint of a fly angler. The following SNOTEL map shows, as of February 6th, 2018 the current Snow Water Equivalent (SWE) for the state of Colorado is sitting at 63% of average. When you dissect further, you’ll note that the Northern portions of the state are faring much better. The Colorado River Basin SWE is at 79% of average, and the South Platte River Basin is at 93% of Average. Denver Water announced last week that the SWE for mountain drainages spilling into Dillon Reservoir was at an astounding 105% of average, which is over double what some of the Southern River Basins are currently experiencing. So while there are parts of Colorado that are experiencing drought conditions, not all parts of the state are seeing the same thing. 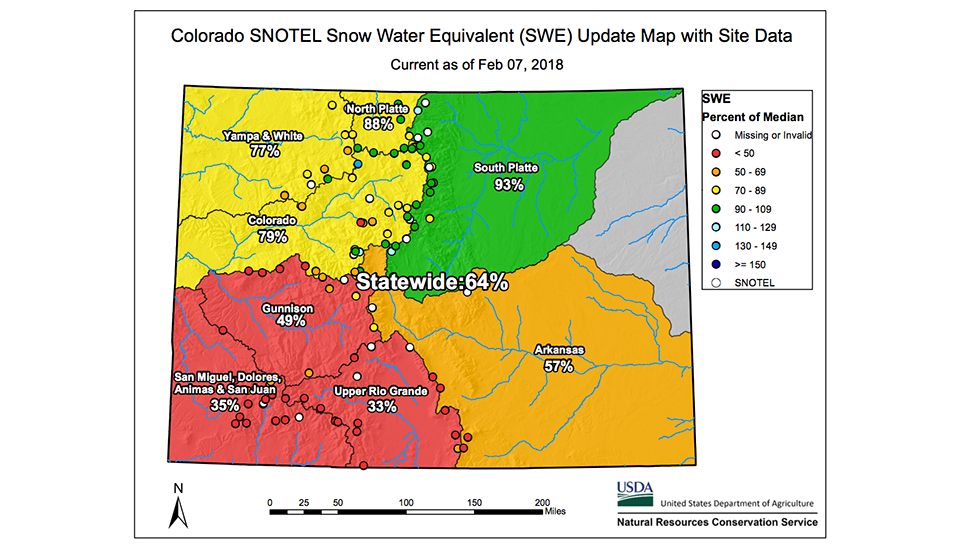 The next point that is important to consider is that unlike the ski industry, fly fishing in Colorado does not have an expiration date. So while many ski resorts will be closing their lifts come mid-April, the mountains and rivers of Colorado will still be open and willingly receiving any and all of Mother Nature’s water bounty. For anyone living in Colorado for the past decade-plus, we can all remember years when a majority of our state’s snowpack comes after the closing of our famed ski resorts. And let’s not forget about Summer rains, as these too, are a notable contributor to the health and well being of Colorado rivers.

The last point of consideration needs to be our state’s numerous reservoirs. Back in the early 2000’s, our water managers hadn’t quite grappled with how to manage Colorado’s annual water allotment. This led to reservoirs being pre-maturely drawn down, too early in the season, before we had a reasonable idea of how much water we had for the coming Spring, Summer, and Fall. Fast forward to today, and water managers have learned to wait until spring to release water from these holding ponds when they have a realistic idea of how much water is sitting on our mountain tops. What this means for anglers is that despite a potential weak snowpack come runoff, we still have plentiful water supplies sitting in all of Colorado's many reservoirs, waiting to help sustain a positive habitat for our resident trout population.

This is the earliest I have provided a Snowpack Update since I began this series 5 years ago. And while there are many who will lead you to believe that we are in a doom and gloom scenario, I’ll be the first to say let’s sit back and see what happens. As we currently stand, half of Colorado is near State historical averages, while the other half is sitting in a more precarious situation. It is only February 7th, which means we have over 4 months until the official start of Summer. In the meantime, I suggest that if you’re not headed up the hill to make some turns, you should consider heading out for a day on the water. Conditions have been ideal as of late, and we’re receiving outstanding reports from our guides and customers of unseasonably good fishing. We’ll be sure to keep all of our customers up-to-date on any notable developments as it pertains to our state's snowpack.