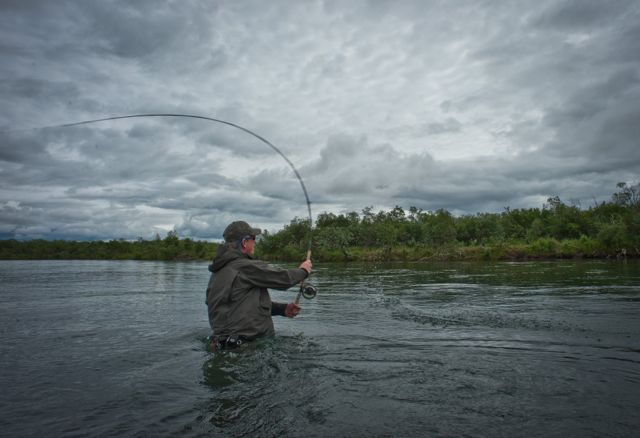 Deneki owns and operates fly fishing lodges in Alaska, British Columbia, and the Bahamas. In addition to running fly fishing operations in some of the most compelling fisheries in the world - the Dean River, the Kanektok River and South Andros Island - Deneki also runs an online blog with some great spey tips and advice that keeps us interested and engaged year round.

Trout’s Fly Fishing: How does throwing a two-handed rod change the game when you are river fishing?

1. You have much better line control. The extra foot to three feet in length on a double-handed rod totally changes the mending game. Your ability to speed up, slow down and steer your fly has a big impact on how you can present your fly, and we all know that presentation is the biggest factor in catching more fish.

2. It's more fun! The entertainment-to-work ratio is much higher with a two-handed rod. Choosing your spey cast and executing it well is fun - it's much more engaging than making the same overhead cast over and over through a piece of water.

3. It's easier to cast at distance. As I'll mention in question #3 there's a potential problem here - but in those situations that really call for longer casts, it's hands-down easier and more efficient to make them with a two-handed rod.

Trout’s Fly Fishing: What should someone who has never casted a switch or spey rod think about if they are interested or researching two-handed rods?

Andrew Bennett: "Get a lesson. Really, as much fun and as little work as it can be to make spey casts, the first few days are pretty unintuitive for most people. With the right rod, lined well, and a little bit of instruction, you can be making great fishable casts within a couple of hours. Picking it up and figuring it out on your own is a long road unless you're incredibly talented.

I often say that a spey cast is a lot like a golf swing. It has multiple stages, multiple points of rotation, and fairly subtle timing and power application. It's just a more complicated motion than an overhead cast, and a little help early on goes a long way.

If you're new to double-handed rods and are looking at buying one, the biggest thing to keep in mind is that the rod-line combo is everything. It's much more important than with single-handed rods. Get a line recommendation for someone you trust, and experiment around a bit. The right (or wrong) line will completely change how a two-handed rod casts."

Trout’s Fly Fishing: What are the biggest misconceptions about two-handed rods?

Andrew Bennett: "That it's all about distance. Yes, it's true that good casters can throw a lot of line with a spey rod. Especially today with modern Skagit heads and super-powerful rods, it's not that hard to launch cast after cast out past 100 feet...where you have terrible line control, very little ability to influence how the fly swims, and almost zero chance of setting the hook well. Oh, and did I mention that the fish don't usually swim out there anyhow?

We're constantly telling our 'spey guys' to cast shorter. Make the long cast when you need to - but that's probably less often than you think. It's much more about line control, efficiency and fun than it is about sending your fly into the next zip code." 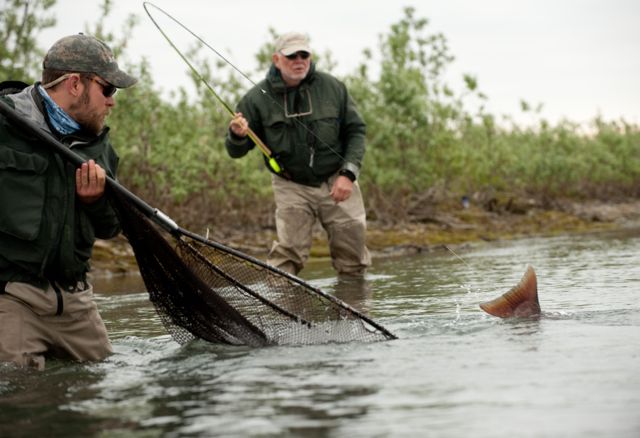 Trout’s Fly Fishing: Do you have any quick tips to help shorten the learning curve from a casting perspective?

A couple of years ago I spent some time at Alaska West with my buddy Dec Hogan. At that point I had a good amount of spey fishing under my belt - probably a couple hundred days, fishing with some of the better casters in the Northwest. I asked him to have a look at my casting and tell me what he thought - expecting, of course, some finer points from the Master. His incredibly technical bit of advice? 'Dude, you need to slow down.'" 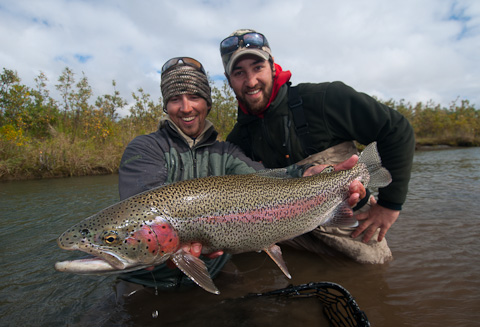 Trout’s Fly Fishing: Two handed rods are picking up in popularity for trout in fisheries where they haven’t been used much before. What’s your take - is this a trend with staying power or is this just another flash in the pan?

Andrew Bennett: "I think it's a trend with staying power as long as you're talking about primarily swinging flies. If you're fishing a sculpin or a leech or a hopper or a mouse - anything where the swing is a good part of the game - I think all the benefits are there, especially the fun factor. Spey casting was built around a swung fly presentation, so it's just always going to make sense for that style of fishing.

Spey casting baetis patterns in January? I'm not so sure that's got legs."

And there you have it…

Don't forget to stop back here at Trout's Fly Fishing over the next couple of weeks. Fall fishing is picking up steam - streamer fishing is getting hot in Colorado and we'll have steelhead trip reports from the Sustut River in BC and the Grande Ronde in Oregon.