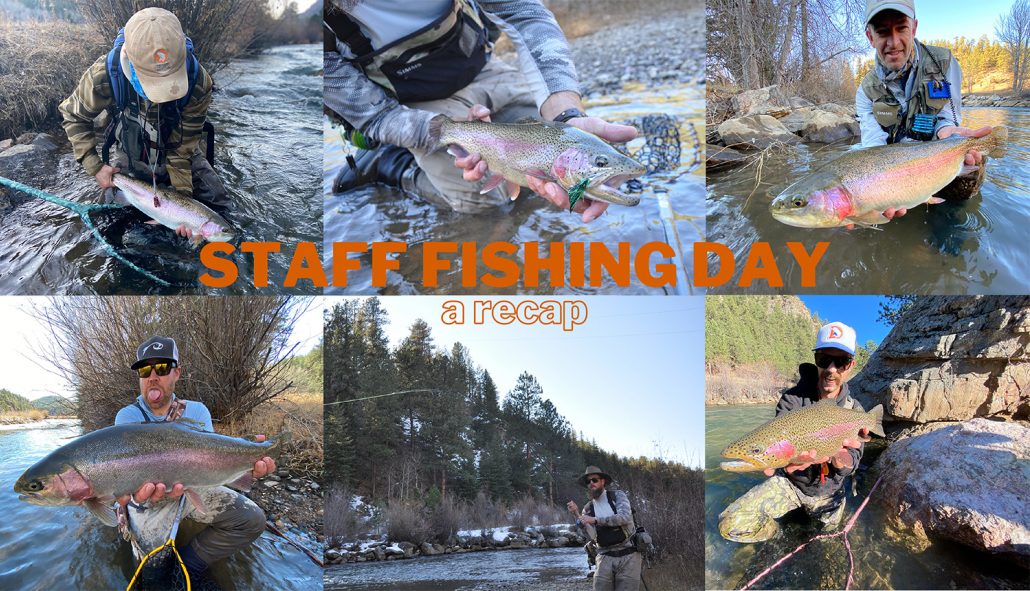 When Tucker invited the crew to fish a private stretch of the South Platte River and close the shop for the day, I was all in. Rick had already guessed that I would be the first one to RSVP to that email (which I did within seconds). Banter, trash-talking, and the guys crowning me as “stocker king” ensued over the next couple of weeks.

This would be my first time stepping foot on any private stretch of the North Fork of the South Platte River, despite cutting my teeth on its’ scattered public lands years ago. These access points on the river were good for a fish or two, but there was always something alluring about the “unknown” that existed just over the wire fences and no trespassing signs. Sunday morning eventually rolled around and my fellow Shop Hands and I were on our way to the ranch.

The Rawhide Ranch is home to two miles of trophy trout water on the North Fork of the South Platte River, not far from the small town of Bailey, CO. For the Trouts Guide Service, having the option to send clients on trips to private water provides two benefits. The first is that our guests are able to hunt big fish with no crowds which is a very unique experience. It also takes commercial guiding pressure off of other sections of public water on the front range. This section of the North Fork of the South Platte is home to rainbow and cutbow trout that can push into the three to five-pound range.

As Head Guide Scott Dickson pointed out in one of our recent guide reports: “Big fish and no crowds are always a positive thing.”

After a short drive from Denver, we arrived at the pearly gates and punched in the code. We drove along the riverside peering into the expansive troughs I never thought existed until now. Cue the Jurassic Park theme song? I expected the river to be a bit more manicured but was pleasantly surprised to find it relatively untamed. Each bend was accompanied by boulder fields and steep riffle runs-surely not your average pay-to-play property.

We parked the cars and Tanner promptly began mixing up the infamous “red beers” we all know and love. After a few sips, our waders were on and rods were rigged.

“Don't beat ‘em up too bad, boys”, Tucker told us, as we began walking towards the first run. The day started off a little slow, maybe because Rick gave me a balloon animal to use as my indicator. I accepted the challenge with grace and did everything I could for the first 15 minutes while the heckling mob behind me continued to grow. Would this be the day I get skunked on private water?

I took my medicine, re-rigged, and observed while the others stepped into the run. After the first fish was hooked, several more followed. No skunking here. The bottom line- we caught fish and many of them. Every run we explored held an impressive amount of willing fish, all eager to pounce on any large nymph or streamer pattern we threw at them. I could probably write a book on these stocked trout, but for the sake of time, I’ll let the pictures tell the rest of the story.