Ten Things I Learned on My First Saltwater Flats Trip 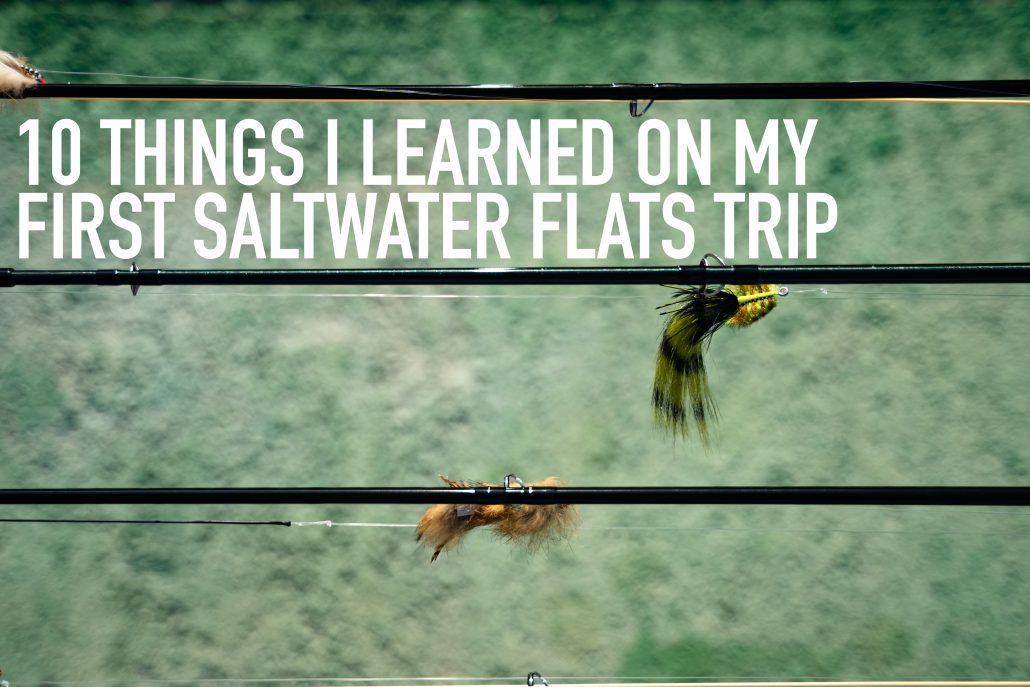 Saltwater fly fishing is by far one of the coolest things I've done in my angling "career." I will always have love for trout and the places they live, but after a little taste of flats fishing, I'm "hooked" (BOOM - Nailed that dad joke). If you're like me and you found your way into the sport of fly fishing through trout, there's no denying that standing on the front of a flats boat scanning for potential targets is different than anything you've done pursuing trout. Different and damn good. Like anything new, saltwater fly fishing can be intimidating. With that in mind, I compiled a quick list of tips, advice, and bits of helpful information that might make your first trip to saltwater a little bit less stressful.

This past May, I had the privilege to make a trip to Cayo Cruz, Cuba and spend 6 days on a flats boat. I went to Cuba with the lowest of expectations. I told myself that I'd be happy with any and every fish I got to cast to and hopefully catch. Why? I've been on enough long roadtrips where the sole goal was to catch worthy trout. More often than not, those goals quickly turn into expectations...and expectations are the mother of disappointment. When I stepped up on the bow of the skiff on our first day in Cuba and Leo poled us over a permit flat, I didn't expect anything to happen. I've heard enough stories about permit; I didn't expect to see one, let alone cast at one. Moreover, I had no expectations of actually getting a permit to eat. So, when Leo spotted a permit following a ray moving towards us, I thought he was joking. With no real expectations of getting an eat, I actually made a reasonable cast. The permit followed as I stripped the Avalon fly back to the boat. Leo yelled set and I absolutely bungled the strip set. I did some hybrid strip-pull back set that resulted in a big old pile of nothing. I wasn't prepared for success.

Preparation is maybe the most consistent theme in saltwater fly fishing. Be prepared to cast at all times. Pull the exact amount of line you feel comfortable casting with the rod you're using with the conditions at hand out of your reel. (Don't have more line pulled out - that doesn't help you or the guide). Tend to your excess line and make sure it's stacked, laying flat and ready to shoot. Keep your feet off the line. Have alternate rods at the ready if other species present themselves. I could go on and on. The action in saltwater fishing happens in quick bursts and it's important to be prepared for anything and everything at a moment's notice.

After I duffed that first permit on our first day, I worked myself into a bit of a frenzy. I started to get nervous for my next shot at a permit. Now that I knew they actually ate flies, I had the permit shakes pretty bad. When I stepped up on the bow the next day, I promptly cast absolute laser beams directly on top of the next two or three permits heads. Splashy laser beams. Ones that spooked the hell of those fish. I wasn't leading them. I wasn't presenting the fly delicately. I was tense and my performance reflected that. I could feel the tension building up in my shoulders and my cast was falling apart.

While taking a break from the bow, I kept on telling myself to calm down. Easier said than done, no doubt. One thing you'll realize about fishing on a flats boat, there is a lot of down time to think and talk about all sorts of stupid things. With a little too much time to think, I thought back to the night before while I was drinking cold Cristals and watching the NBA Playoffs at the bar. My big, dumb brain started making connections between free throw routines and flats fishing routines. It might be cliche, but you'll see damn near every player take a big, deep breath or two before they take a shot they've taken damn near a million times. Why not me? I can take deep breaths too. Next time up on the bow, Leo pointed out a fish. I took a deep breath. Leo got a little frustrated with my delay and urged me to cast. I cast and damn it if I actually put a good cast on that fish. He didn't eat, but that's beside the point. I was a little more relaxed and my casting reflected that.

3. 80 FOOT CASTS ARE AND ALWAYS WILL BE PRAYERS

I might be alone on this, but, I got in my head that you need to be able to cast 80 feet on a dime to catch fish on flats on the fly. This could just be me. But, maybe it's not. Every fish-catching cast we made was 25 to 60 feet at the longest. Maybe that's because I can't cast 80 feet on a dime on command, but fish were still caught and we didn't completely suck. 60 feet into the wind isn't an easy cast and that fact isn't being overlooked. You don't need to cast an entire fly line to catch fish in the salt. Practice casting in advance of your trip - Focus on accuracy and quick deliveries within 60 feet. Don't worry about the hero cast.

It is standard practice to keep your fly in your off-hand. When a target is acquired you drop the fly and start your casting stroke. This allows for a timely cast and keeps your fly out of your fly line. When I stepped on the bow, I had my leader barely poking out of the top guide on my fly rod. When I'd drop the fly and initiate my cast, it would take a couple of false casts to get the head of my fly line to start to properly load the fly rod and allow for a good cast. When you get into the ready position with fly in off-hand, make sure to keep ten or so feet of fly line out of the top guide. When you start to cast, your rod will load quicker and you'll reduce the number of false casts required to make the necessary cast.

As a general rule, unless you're putting the absolute wood to every fish on a flat, river, or lake, the action will take place in quick bursts. There is a pretty stark difference between fishing for trout or most other freshwater quarries and fishing the salt. How? In freshwater, you're generally casting and presenting flies in between the catching and that keeps you engaged with the task at hand. Actively engaged with the task at hand. Step into salt and there is a distinct lack of catching. There is a lack of mindless action that you might be accustomed to when trout fishing. It takes a little bit to adjust to this pace, but, it's important to stay engaged and ready to go when the moment presents itself.

6. SIDEARM CASTS ARE YOUR BEST FRIEND

Flats wind is windier than Mountain wind. Why? You can't really hide from Flats wind. There's no high banks or tall grass to dampen the wind. It's just a wall of wind headed wherever it damn well pleases. With that in mind, a sidearm cast proves to be very helpful when fishing the flats. The wind won't be as strong the closer to the surface of the water because of friction. The higher your line is off the water, the stronger the wind is where your line is being cast. If you keep the cast lower, it's easier to cut through the wind and deliver your cast at it's intended target. It also has the added benefit of landing the flies a bit softer because the fly isn't dropping out of the sky from as high a point.

Bonefish are squirmy as hell. Getting your fly out of a slimy, wriggling torpedo of muscle can prove to be a difficult task. Hold the bonefish upside down and they'll settle down and it's a lot easier to unhook them and send them on their way.

Fishing and failure go hand in hand. However, it's natural to want to succeed right off the bat with any new opportunity that comes your way. But, you've never fished the flats before. There are a lot of new skills at work. Whether, you're making sure you don't trout set, making sure you bow to a jumping tarpon, making sure to manage your line correctly, or making sure you clear your excess line when you hook into a hot bonefish, there are plenty of opportunities for things to go wrong whether they're your fault or not. Don't sweat the small stuff and learn from your mistakes.

9. SUN PROTECTION OVER EVERYTHING

This probably goes without saying, but I've never had sunburn on my lips before. So, I had to include it. I was well prepared with SIMMS Solarflex Hoodies, Howler Brother's Shoalwater Pants, Sunscreen, and the like. But, bring SPF rated chapstick and use it.

There's nothing more depressing than seeing a huge ball of fly line clunk through the guides after getting a eat and watching that fish take off for "Bolivian". Impending doom is the best. Hopefully, the rod survives, chances are the fish got off. Check out this video from our friends at Yellow Dog explaining best practices for line management. There's a lot of good stuff in this short. Namely, clear the line before you are ready to cast to fish and using the OK sign with your fingers when shooting line to act as another line guide.

BONUS: WANT PICTURES? - KEEP THE FLY IN THEIR MOUTH

Saltwater fish don't want to stick around to have tea and krimpets. The ocean is scary place. They're liable to get eaten at any time. They're bigger, harder to handle, and slimier than your average trout. I've released many a trout in my day and feel confident handling them, snapping a quick picture and letting them go. Not so with saltwater fish. If you want to remember your first bonefish on the fly and not fumble it into the boat, you'll heed this advice. Here I am, with my second bonefish on the fly. I fumbled my first.