“Terra Firma,” said Captain Tom. He said it very matter of fact, without sympathy – like a New Englander. “That’s about the only thing that will save you now. You still want to fish?”

My taped up fingers clutched the side of the 23 ft. Maritime as it bobbed like a cork just off the Coast of Nantucket Island. My eyes were still watering. I spit twice to try to get the battery acid taste out of my mouth and pushed up from gunwale of the boat.

“Ok,” said Captain Tom.” He didn’t sound convinced about my sea worthiness. He did sound sure about the fishing outlook. “The albies are definitely in.” 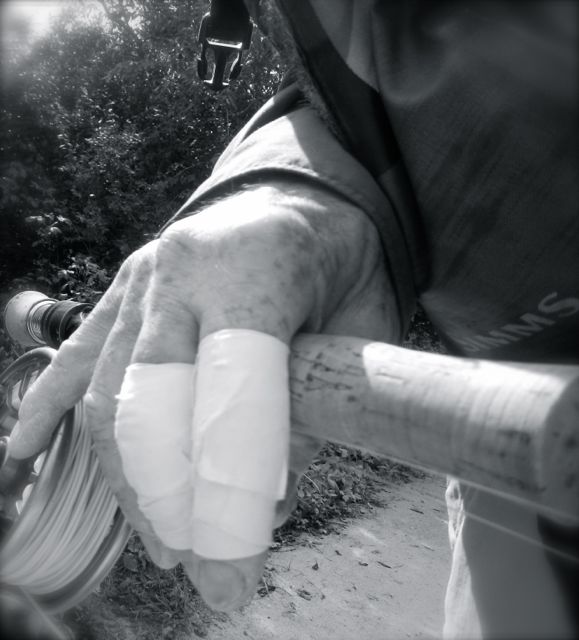 The albies were definitely in. We saw the first fish bust in a wave after a 40 minute ride from Madaket Harbor to the backside of the island. I had rigged up an 8 wt. Ross RX with a sink tip, 20 lb tippet and a 10-inch section of 60 lb bite tippet. Captain Tom positioned the back of the boat just short of the crashing waves created by a number of tides that converged about a mile from the coast, the water was roughly 6-25 ft in depth.

It was where these tides converged that the current pulled the smaller bait – squid, eels, herring and silversides – into a kill zone. During different times of the year migratory fish including striped bass, different species of tuna, and false albacore tee up on the chow line. 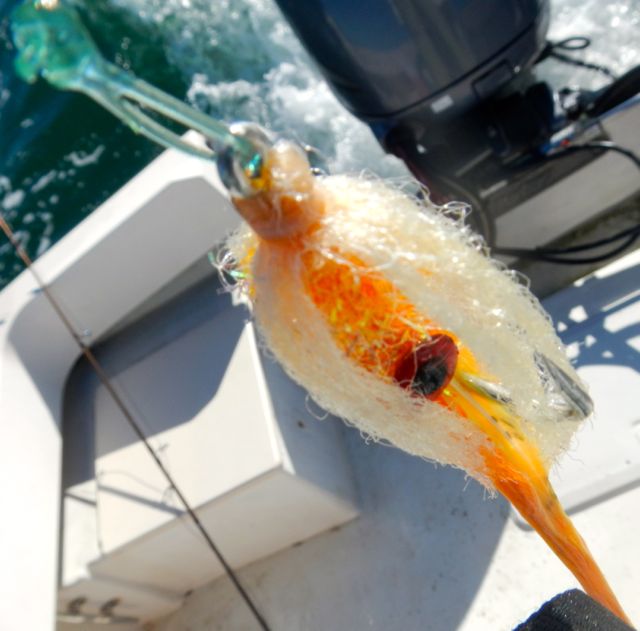 The fishing itself wasn’t exactly technical, but I’d never fished a rip tide like this before. The entire process and environment had my attention from the get-go. Standing at the stern of the boat with my back to the island, I looked out at fairly large rolling swells crashing toward the boat. Tom throttled the engine, gunning it every once in awhile if a large wave got close. I tore out 80 or 90 feet of line and let it fly – a kind of off balanced chuck-and-duck over my right shoulder. From there, I could watch the giant orange squid pattern bounce over wave crests and swim under the surface in the depressions. On some casts I’d use long slow strips, on others I’d make them short and twitchy.

After 10 or so casts I watched my fly rise to the top of a crested wave. My eyes popped when I saw the water explode in bursts just behind the fly. My fly disappeared behind the wave and I thought for a second that I had imagined the top water action. Then the albie grabbed my fly and it was on. 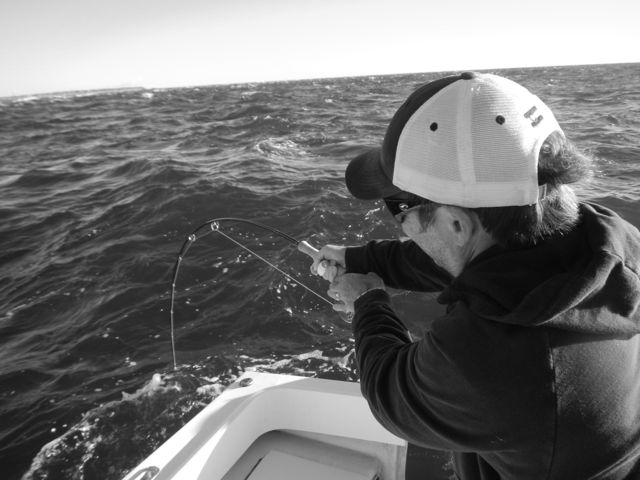 I’ve caught quite a few saltwater species – bonefish, tarpon, big jacks, barracuda – I’m not sure any of these species have the same initial burst speed and power out of the blocks. Maybe it is because we were operating in a swift moving rip current, maybe it is the torpedo-like shape and genetics. I do know that when you fish for albies you need a lot of backing in your reel.

“Uhhhh…. I think I got a problem here,” I announced to Captain Tom. “I’m going to get spooled if this fish doesn’t slow down or turn.”

He gunned the boat, turned and we bashed our way into the roiling rip and white water. Not 10 minutes before Captain Tom told me that he had doubts about charging into the large swells if a fish got away from us – but there we were. After a 30 second jarring battle, we bounced through the big waves and ended up on the other side in calmer water. I’m pretty sure that if the fish took me all the way out to where my dacron backing meets the spool, it would have been game over.

After that initial blistering run the fight became a grudge match. The fish was hooked well and we were out of the big chop. Soon enough, the fish came to hand. 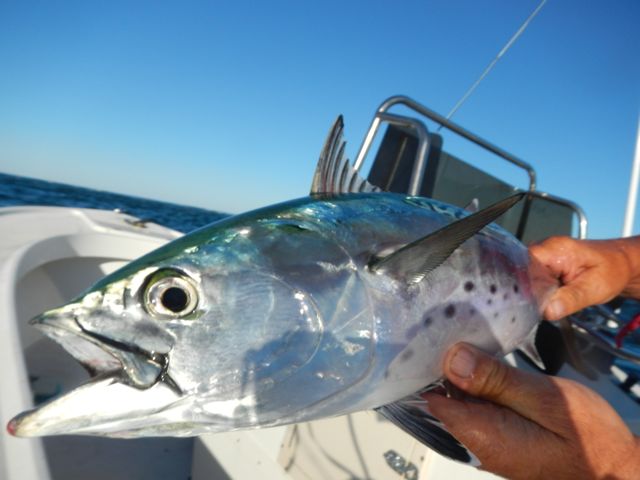 False albacore are an increasingly sought after game fish. The fact that they can reach such epic speeds and can be found blitzing on the surface make them a really, really fun fish to chase with a fly rod. Albies are also known as little tunnis and are prolific in numbers as well as geographic reach. They are the largest sub species of tuna and can reach up to 30+ pounds. The fish we got into ranged anywhere from 6-10 pounds with one fish that was estimated at 14 pounds. 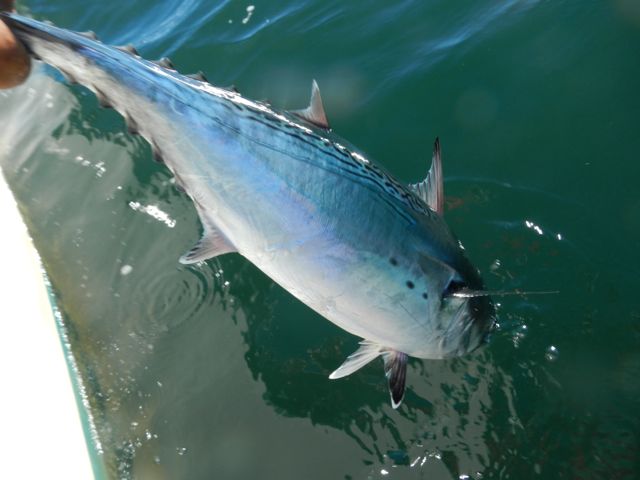 Shortly after releasing my first fish the pangs of nausea hit me. I put out another cast and began swinging and stripping. In a quick flash I saw three torpedo shapes gliding through a cresting wave just off to the left of the boat – not far from my fly. There was no doubt about their intent. I just let the squid pattern swing, held my rod and fly line tight and waited for the grab. 'One Mississippi… two Mississ… BANG!'

The fish was running fast and I started dry heaving off the side of the boat.

The first white hot scream of the reel and electric burst of speed is amazing – so much so that my dry heaves subsided as quickly as they hit me. Adrenaline has been known to do crazier things. But after the second fish made it onto the boat, there was no holding back. I vomited for a good 5 minutes straight off the side into the ocean.

That’s when Captain Tom talked to me about the cure for what ailed me.

We continued to fish for the rest of the day. I wasn’t in the best shape but I’ve been worse on a boat. When you are on fish in the salt, the wind isn’t crushing you, and you live in a land locked state, you just dust yourself off and get back after it. You keep casting, keeping swinging, keep stripping - and keep puking - until it is time to turn to boat around and head back in… back to terra firma.