The Fork in Early Fall 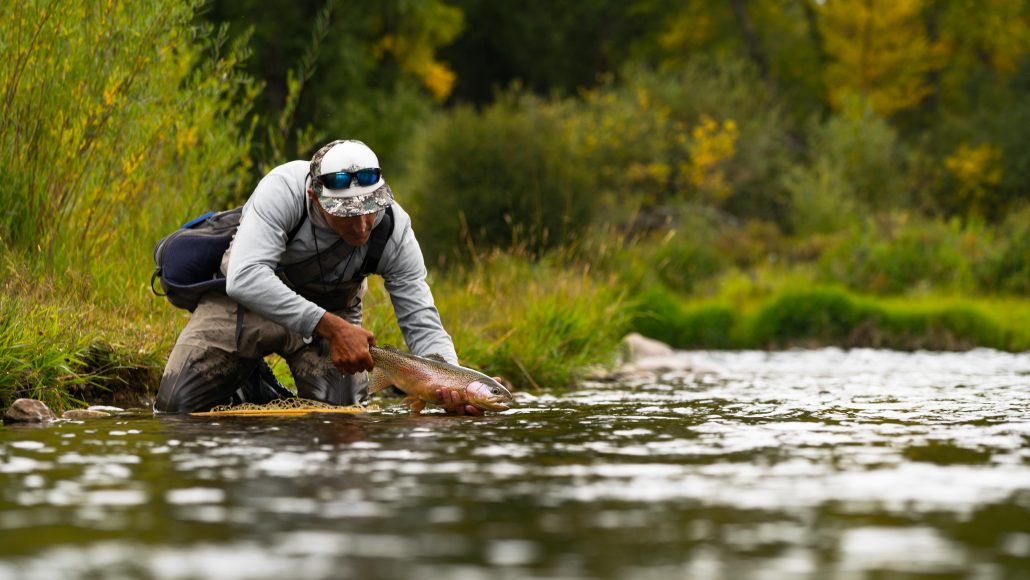 It's hard to beat fall in the Rockies. The weather starts to cool down, colors start to change, and fish start feeding heavy in advance of those slower winter months. Whether you like throwing streamers, dries, nymphs, or hopper-droppers, fall has a little something for everyone. Our head guide up in Frisco had the day off and the forecast was looking right, so we figured a quick day trip to the Williams Fork was in order. As it turned out, Colorado gave it all up. From early fall colors to some impressive wildlife sightings to quality fish on dry flies, this day had it all. Enjoy some photos from the day.

The trip started off with a bang. We parked my truck along Route 40 and stepped out...and a big ole black bear sauntered across the road and up the hill. I was able to snap this quick pic. A good start to the day. Zeke and I geared up and crossed the Colorado. We rigged up once we arrived at the Willys. Zeke went with the ole trusty hopper-dropper rig. Zeke found a riser within minutes. But, that riser wasn't too cooperative.

A couple of fly changes later...

And Zeke was hopping off the bank to bag... To start off the Williams Fork wasn't giving it's trout up that easily. While we were seeing blue-winged olives, tricos, PMDs, and hoppers, we didn't run into that many actively feeding fish in the runs. Zeke worked that undercut bank and found one who couldn't resist the lightning bug. Zeke with the scoop. Note the blue on the cheeks. On point. Zeke started to find his rhythm...while I was on the other bank, stepping on bee's nest. I was able to snap this frame after taking a stinger or two to the arm. Nature.

Zeke continued to work upstream and sight-fished his hopper dropper rig to the best fish of the day...to that point. The updated Ross Gunnison was putting the brakes to those Willy's Fork fish. Let's check in with Zeke, see what he thinks of the moose...Nothing, unphased - "Is that a fish there, behind that rock?" Let's check back in with the moose - "These shrubs look good."

Let's check back in with Zeke - "This seam looks good."

Damn, an osprey showed up. "NATURE, that's why I come up here."

The clouds started to look pretty serious...but, we decided to sneak a couple more casts in. Zeke was working what appeared to be a solid fish eating BWO dries in a back eddy, tucked up against an undercut. Zeke almost made quick work of him... But, this day maker had other plans.

After a tense couple of minutes, the day maker was in the bag. On a BWO dry, that's hard to beat. Early fall giving it up. A little double rainbow on the way back to Frisco...this day had it all.