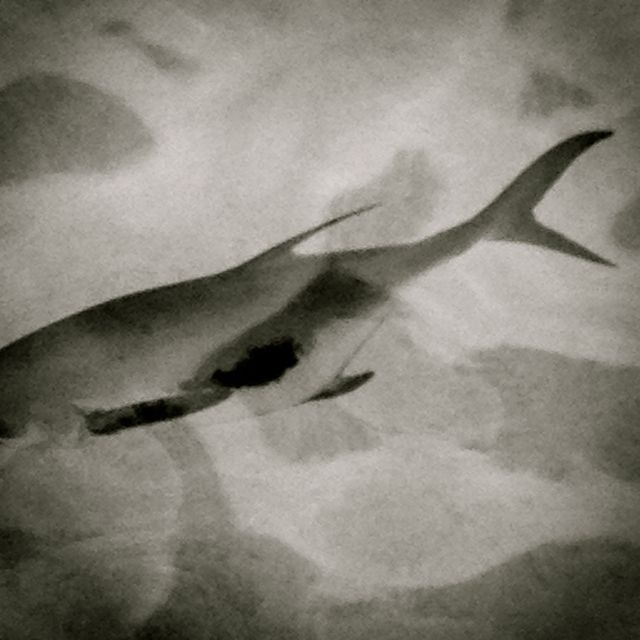 For most people, the sensation and experience when they finally sight, cast, present a fly, hook, fight and land a permit is one that stays with them for a lifetime.

For me, the feeling lasted for all of about twelve and a half minutes. Give or take.

You need to understand that I’ve had a monkey on my back for almost a decade now: Trachinotus falcatus. The first time I saw a permit was in the late nineties in Florida Keys. I later had encounters with them in Belize, Tortola, Mexico and most recently Honduras.

There is something that is just completely vexing, alluring, and mysterious about permit that is hard for me to put my finger on. It is not like they are necessarily the most sleek or beautiful game fish that swim in the ocean – they look kind of bloated, and have chunky bubble gum lips. They are not the hardest charging or exciting of the saltwater superfecta – that crown would have to go to the tarpon.

There is an element of elusively and scarcity about them. Law of supply and demand? Maybe.

My general curiosity about permit soon morphed into something my wife likens to an obsession. The first thing she asks when I come back from a flats trip is: “so did you finally catch a permit?” Then she rolls her eyes and shakes her head. The permit monkey was on my back.

The sight of a tailing permit is not one that you will soon forget. Two giant black swords arched skyward in the low morning light on a Caribbean flat? Is there anything else in the angling world that can make the hair on the back of your neck stand straight up, your breath get shallow, and your heart race? I’ve been around the block and I think not. 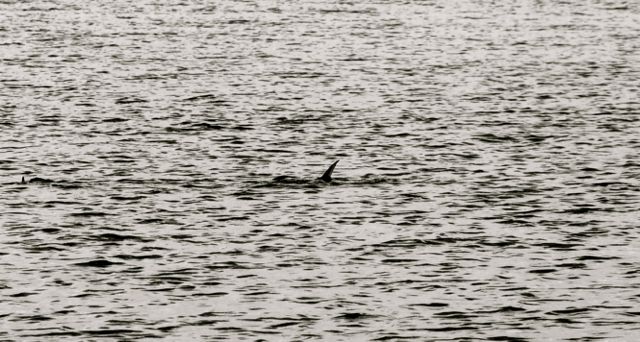 Maybe I’m attracted to permit for the simple animalistic reason that I’ve never caught one before. You want what you don’t have.

Well that all changed on a saltwater flat in Mexico last Monday.

The day began with a not-so-great start. The cloud cover was thick. There was a steady wind that made my pants sound like a low flying Blackhawk chopper. There was very little chance of seeing fish through the water – we were forced to look for nervous water and tailing fish.

My guide and I had a few encounters with permit through the morning – most were quick and uneventful. 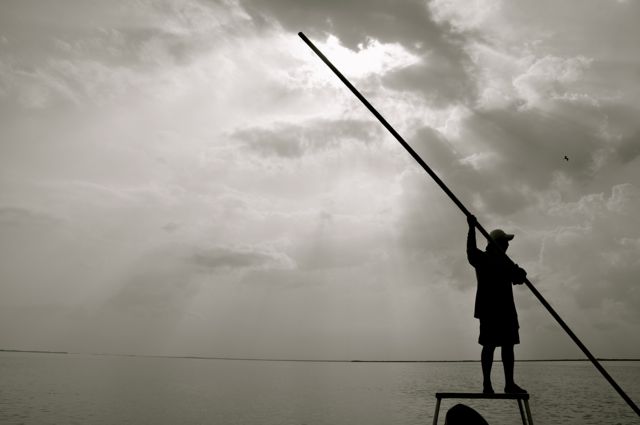 Toward the end of the day I was hypersensitive to the fact that the clock was ticking. Every opportunity you get with a permit is an important one. I had my shots – I missed those shots. It was on me. With only about 90 minutes left to go on the day my confidence began to give away – as it always does. I started to get down on myself.

‘What could I have done with that last fish to get my fly right in front of him?’

‘If I just put the fly closer… but not directly on his head… I’m sure he wouldn’t have spooked.’

‘I’m never going to see a permit again. Ever.’

Obviously, permit fishing has taken a toll on me. 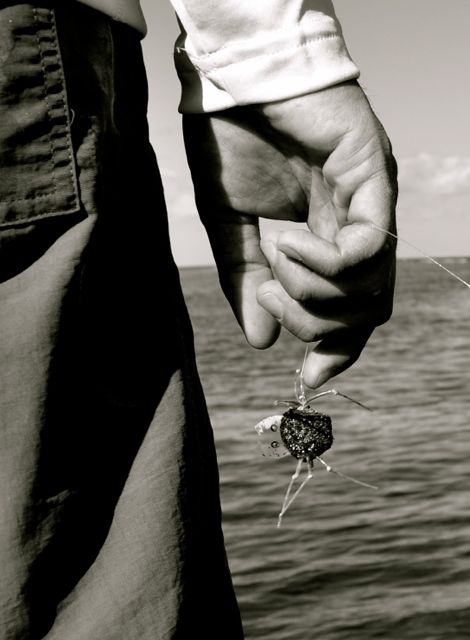 It was in this valley of depression, standing on the deck of a 23-foot panga that my guide finally spoke after a 25 minute stretch of complete and utter silence.

Those three short words sent a wave of electricity through me – through my brain, through my nervous, system, through my hands, feet and retinas. Game on.

“Do you see him? Ninety feet out. Eleven O’clock,” Nestor said.

I looked and immediately nodded my head and pointed my rod.

The incoming wake was huge. It made a V shape of nervous water as it moved directly at our boat, about 90 feet out and 25 closer to the mangrove shore from us. The V shaped wake moved at a very steady pace… in about five to seven seconds it would be in range. A perfect shot.

I made the cast and put it in front of the fish.

I stripped slow. The wake was maybe five feet from where I put the fly and the permit immediately turned. The fish was following it.

One more long slow strip and I felt the hitch. The permit ate - text book. Finally. I kept my tip down and strip set the fish – keeping just enough pressure against the fish and avoiding the dreaded “pop.” Once the fish realized something was completely wrong with the shrimp/crab hybrid he just ate he turned and hauled ass for deeper water. The line cleared off the deck and soon I was standing on the front of the boat – rod tip held high, reel screaming, my heart pounding… ecstatic.

I had just caught a permit.

Even my guide agreed.

“You did it! Nice!” cried Nestor. A rare outburst for Nestor – he too had done his job well.

If no one were around I would have done a dance – or a victory jig of sorts. It would have looked like what NFL players do in the end zone… during overtime… at the Superbowl.

I fought the fish for about twelve minutes. I’ll admit, I have no idea how long I was actually on the fish. Time stopped. Everything went away. I was in the permit zone. Nothing else mattered – I just fought the fish and tried not to make any stupid mistakes. 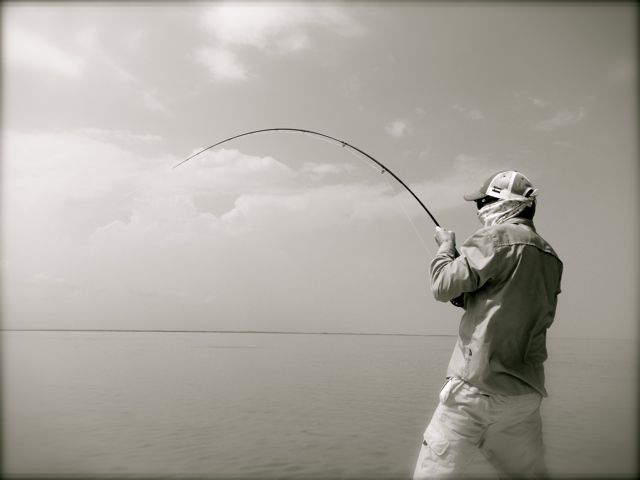 The fish was close in now, close enough where I could just about grab the leader with one hand and bring the fish closer to the boat. Up until that point I had not seen the fish – not really. I had seen the big V shape wake. After he ate I saw a flash of silver and streak of blue as the permit put it in second gear and high tailed it out of dodge on his first long blistering run.

The permit made a big turn and came in front of the boat. When it did I finally got a good look at the first permit I had ever caught. In my head, warning bells went off. Something was wrong. My brain could not make sense of it. Then something came back to me:

I started to panic. I looked back at Nestor. He still looked happy and content – ready to help me land the permit.

Nestor suddenly came to attention. At that point, he too was convinced I had hooked a permit. He came up behind me and peered into the water. The fish was still close – just a hand grab away from bringing it in by the leader.

My heart sank. I knew what was coming next. I fought it. I denied it.

It was however, one hell of a way to spend twelve and a half minutes of my life. Give or take.

- Will Rice is the Director of Marketing at Trout's Fly Fishing. He is also a freelance journalist and a contributing editor for the Drake Magazine. He's written for the Denver Post, Salt Water Fly Fishing, Flyfish Journal, Fly Rod & Reel and he is a regular contributor to Angling Trade Magazine.