The Winter Solstice and Fly Fishing In December 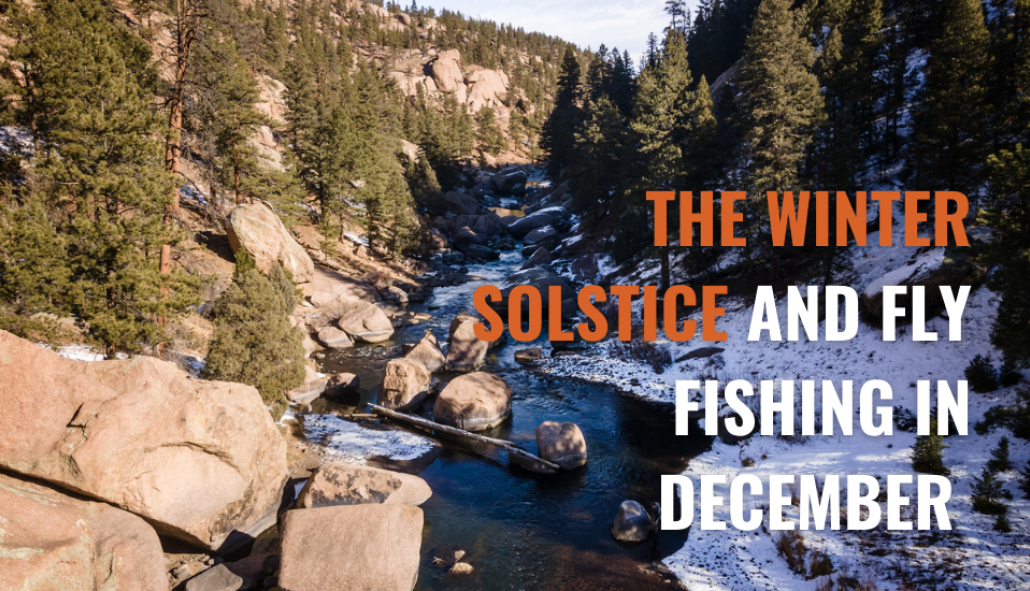 Given that it is the Winter Solstice, aka the shortest day of the year, I figured it would be fitting to dip deep into the archives and find a short read for you all today. If you are interested in fly fishing tactics for the remainder of the month or looking for a brief rundown of how to fish for the next couple of months, continue on. And, if you need some help picking out flies for December, those will be linked down below as well! Enjoy y'all.

Maybe I'm the eternal optimist regarding fishing, but December is going to be another great month to be on the water, particularly if you have the weather on your side. Depending on where you are in the state, winter has undoubtedly arrived to some degree. Some days more so, some days less….but it's closing in. As of this writing, we're 20 days from the first 'official' day of winter, which means the days start to get a little longer but remember there will be many cold weeks that lay ahead. For many in the fly fishing world, daylight savings time in the spring is a more significant holiday than their birthday. Just me? So for those of you yearning for just a bit more time in the sun, remember, as soon as we hit December 21st (TODAY!), we all get to enjoy a few more minutes of daylight each day.

Now that we have covered the obvious a bit let's get back to what you all came here for, the fishing.

The bitter cold spells that always seem to make a few appearances in January and February are just around the corner, along with many days of (hopefully) fresh powder on the mountains. The fish know this and are still on the feed, regardless of what others may tell you. That being said, you shouldn't expect the sun-up to sun-down action you can often depend on during the summer or fall months; although it may seem obvious to some, to others, this may not be the case. Fish have transitioned into their "Winter Mode" over the past couple of weeks but, what does that mean? In general, it means that their metabolisms begin to slow down in response to the colder water temperatures. This is why you will find fish becoming more selective during the winter months. They do not want to expend a lot of energy (i.e., wasted heat) on an offering that looks a bit off. For those of you making your way out to the water over the next couple of months, expect your best fishing to be best on warmer, sunnier days, particularly from around 10 am-3 pm.


A few days ago, I made my way into Cheeseman Canyon with an old friend. Before the sun made its way around the canyon, we found that very few fish even considered our flies, and coincidentally, we didn't see many fish feeding in general. Hopeful that things would change as soon as the sun got into the canyon, we continued with our efforts. Like clockwork, once the first rays of sunlight touched the water, noses started to be seen, and fish began to be caught. By mid-afternoon, as the sun began to leave the canyon, the air temperature dropped, and so did the bite.

Fly Fishing in canyons can place you in tricky situations during the wintertime. With short warming windows and longer times isolated from the sun, finding holes full of feeding fish may take a bit longer to find than during the warmer months. If your fishing plans have you going out to more open, unshaded stretches of water, it is not unlikely to see an extended mid-day window of actively feeding fish.


From a fly perspective, this month and the coming months ahead, the staple patterns that should be in your fly box are as follows: eggs, worms, midges, and various Baetis patterns for those unseasonably warm days. If you're fishing a river with stoneflies, particularly goldens and salmon flies, a good old Pat's Rubber Leg could be your new best friend. Keep in mind that as we move into these colder months, your goal should be to find feeding fish. That means taking the time to watch a fish's activity for a moment if you find them. Analyze their feeding windows and notice how far they are moving laterally for food and the time between their eats. If you do not do this, focus on these two specific tactics at a minimum.

1.) Focus on the softer, shallower zones next to deep water in an attempt to find fish looking for an easy meal and slightly warmer water.


2.) Don't overthink your flies. Fishing some combo of the flies mentioned above will always catch fish throughout the winter. Instead of focusing on fly selection, take some time and focus on your drifts, experimenting with weight and split shot, and above all, fish thoroughly. Each time you leave a stretch of water, you should be confident and move on to the next.

Even though the weather forecast calls for a dusting of snow over Christmas, know that there is still good fly fishing to be had during these winter months.If you or someone you know needs some assistance figuring out what bugs to use during December, come swing by our Denver shop or our mountain location in downtown Frisco. If you cannot make it into either shop, feel free to give us a ring at (303) 733-1434 or shoot us a message over live chat. Until next time, we will see you out on the water.