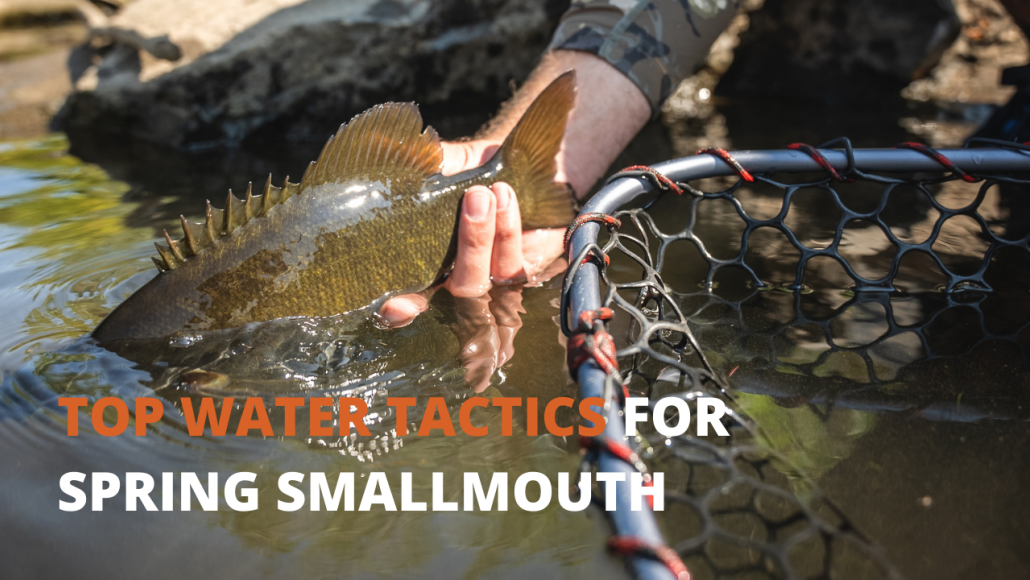 Watching any finned species demolish a fly on the water's surface can bring a smile to any angler's face. For many, it's what keeps them coming back to the river, reservoir, or pond for more. One of the best? Smallmouth bass (Micropterus dolomieu). Often called smallies, smallmouth bass can be found in a large majority of the United States and are relatively abundant here in the Centennial State.

In the midst of spring, we are right on the cusp of some of the most intriguing smallmouth bass opportunities right here in Colorado. This being the case, I thought it would be an excellent opportunity to shine a little light on spring topwater tactics pertaining to the smallmouth bass.

While the topwater smallmouth fishing in other parts of the United States is firing on all cylinders right now, we have to wait just a little longer here in Colorado. However, this is the perfect opportunity to get a little more dialed in before the season really kicks off. Below are a few tips, tactics, and book recommendations for those interested in diving into the world of smallmouth bass.

A Brief Description of Smallmouth

Cousins to the largemouth bass, smallmouth (Smallies, Bronzebacks, Brownies) can be found in a large portion of the United States. However, smallmouth much prefer–similarly to trout–cooler healthier waters, feed on insects and crayfish, and unlike Largemouth, smallies tend to hang around all pieces of water.

Initially found in the eastern portion of the United States, the smallmouth's native range extends from southern Quebec to southern Alabama. Smallmouth can often be found in major river systems and reservoirs, typically coexisting with largemouth bass, crappie, carp, and panfish.

Known as a visual predator, the smallmouth bass prefers a river/lake with a bottom with a sandy substrate and plenty of structure to hide amongst–rocky outcrops and weed beds. Being a visual predator means that the smallmouth is equipped with a wide variety of traits to actively search for prey, lateral lines and monocular vision are two examples.

While Colorado no longer stocks smallmouth anywhere in the state, they are still very plentiful in most Front Range reservoir systems and urban environments–The state record smallmouth was caught in Aurora Res!

As temperatures warm into Summer, the prospective smallmouth angler can find success through topwater tactics; below are a few tips and tricks to take along for the next day off and searching for smallmouth.

While the thrill of watching a smallmouth demolish a topwater fly during springtime is not a common occurrence, it is not entirely unheard of. Regardless of how you want to approach this species, the most important factor that will dictate a smallmouth’s feeding behavior is the water temperature. When the water warms to a temperature in the mid-60s, smallmouth will become more opportunistic towards louder, obnoxious flies (POPPERS!).

Subsurface flies and baitfish patterns like a Kreelex and Clouser minnow make great options this time of year before the water temperature really warms up. Once the water temp warms and sustains the temperature mentioned above, anglers can expect smallmouth to move out of their winter holding patterns–deep in the water column, less willing to move—and up closer to the water's surface searching for a high protein meal.

"Remember that smallmouth are ambush predators. They often opt to strike at a fly when it has been suspended after a quick strip. Less energy expended and more energy in!"

If the topwater action is slow or nonexistent on your day out, opting for subsurface flies that mimic baitfish patterns or crayfish is an excellent way to trigger the predatory instinct for those–potentially–low holding fish who have not moved up in the water column. However, there is always the slight chance that an aggressive opportunistic smallmouth is lurking around the water's edge, so tossing a small popper pattern stripping tight to the bank will not hurt. Sometimes topwater take during the springtime can be a war of attrition!

If you are hellbent on seeing some topwater action during springtime and are not getting actions with poppers, an articulated mouse pattern with a slow, steady retrieve can be a good way to induce a violent strike. I think a lot of anglers forget that the flies they buy are designed to work for them, not against them, so do so! Let the articulation of the materials in the mouse or frog pattern sway and wiggle on the water's surface before your next retrieve. The same can be said with subsurface flies! Let the articulation work in the water and lure in the fish.

For those looking to throw frog patterns, the success rate can often be easily determined by taking a moment and listening to the surroundings. If you can hear the chirping sounds of a Spring Peeper or the quack of a Green Frog, your success rate will probably be pretty high. By listening to the sounds around you, you can know if frogs are abundant, and if they are abundant, the smallmouth has already taken notice as well.

Almost as nature intended, the spawning cycle of smallmouth typically lines up with the spawning of other aquatic species. That means patterns that mimic potential threats to the smallmouth, and its spawning, is a meal–crayfish and baitfish!

When it comes to gear, everyone has their favorites. If you are the beginner angler looking to target smallmouth in many–if you live in Colorado–instances, the same 6WT you use for throwing small streamers at trout can also be used to throw small poppers or small baitfish patterns as well! If you want to dip your toe into the smallmouth world and buy a dedicated fly rod for the species, a TFO Axiom or TFO Blue Ribbon are two great low-budget options! For those looking to spend more time targeting this highly addictive species, an Orvis Helios 3D, G. Loomis NRX+, or Winston Air 2 are perfectly adequate for the smallmouth angler.

If you already have your fly rod figured out, the next step is picking a high-quality fly line to deliver your fly to the fish. For most anglers, Scientific Anglers’ Sonar Sink Tip fly lines will work perfectly, especially on bigger waters and deep pockets. If you are looking to target smallmouth and only have a floating fly line, this is an excellent opportunity to try an Airflo Polyleader!

Chasing smallmouth on a fly rod is an enjoyable experience and often–if you live in Colorado–can be found a few miles from your door. They offer a great fight and if you’re daring enough, offer a tasty table fare–so I’ve been told. If you are interested in learning more about smallmouth feel free to come into the shop and ask our knowledgeable staff any questions, you may have!

FLY LINES AND POLYLEADERS FOR SMALLMOUTH