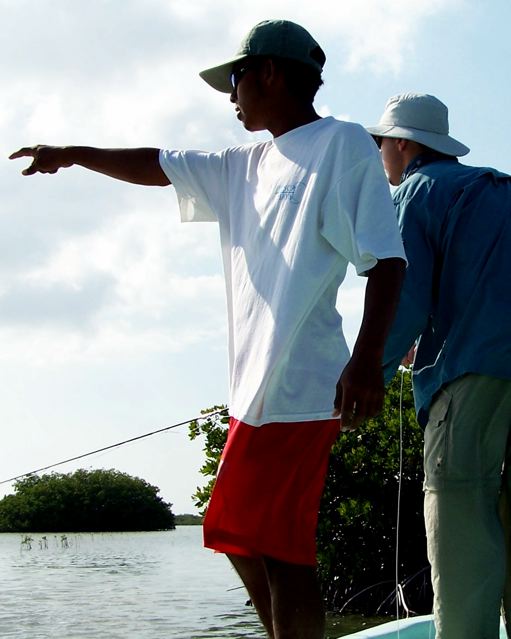 My eyes searched the water for any type of movement – a shadow or maybe a tail. I hadn’t even seen the fish, let alone cast at him.

I wouldn’t say the language barrier was completely broken, but I certainly understood my situation. My guide, Antonio, pointed into a zone of darker water where the shallow sandy flat moved into deeper surf. In the darker water I finally saw the permit bouncing slowly along – the large, round, silver fish looked as big as life itself. I could make out an eye and the distinctive black stripe on his tail. There is a sense of intimacy that is hard to describe when you find yourself this close to one of the most prized salt-water species. It was my first legitimate shot at a permit and my fly fishing game immediately began to fall apart.

The permit was about 50 feet in front of me and I was lucky enough to have a moderate wind at my back. He was moving in my direction – the opportunity was as perfect as I could hope for. My first cast was short but the permit didn’t spook. My second cast was surprisingly on target. As the permit got closer in his methodical search for crabs I gave my bug a short strip and then another. I caught his attention and he moved toward my fly. He followed it with close inspection for three more strips then quickly decided this was not a bug for him and turned away. I was refused.

The permit continued to bob and lull through the small waves and white sand.

“Come, come!” whispered Antonio as he tugged at my shirtsleeve.

Antonio and I then began a comical sidestep in an attempt to shadow and keep pace with the feeding fish. We moved as fast as we could while trying not to splash and make our presence on the shallow flat known. We stalked this fish with heart pounding determination for over 60 yards before finally getting a few feet in front of him. This was my chance. My third and final cast put the bug directly on the permit’s head. I just didn’t line the fish, I actually skulled him.

“Aiiiiiieeeee,” Antonio exclaimed in frustration. I understood his sentiment perfectly. The permit tore off into the deeper water and was out of sight before I could exhale. 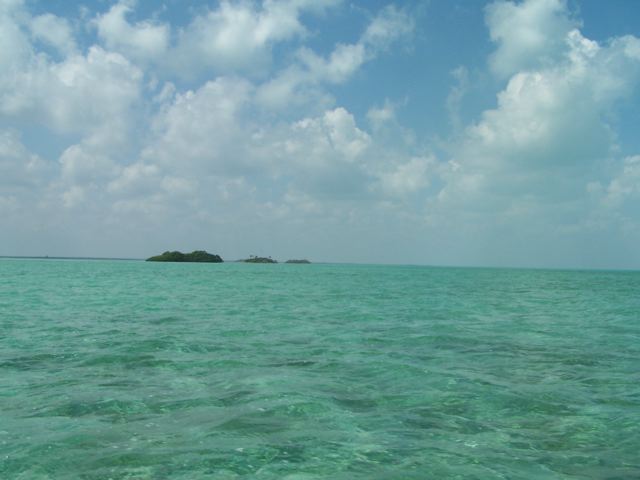 Although I was heartbroken to miss such a perfect shot at a permit, it was this type of opportunity that brought my three buddies and I more than 1700 miles to Bahia de la Ascension on the Yucatan Peninsula, Mexico. Ascension Bay, as it is know to most anglers, is located a little less than half way between Cancun and the northern border of Belize. On any given day, a fly angler will see permit, bonefish, snook, tarpon and barracuda. The fishery is impressive and extensive. We spent most days perched on the casting deck of an 18’ panga staring into the skinny water trying to spot bonefish and permit. Some of the flats are hard white sand and stretch for nearly as far as the eye can see. Others are softer brown and tougher to maneuver. On some of the flats we found sharp coral heads that shredded our boots and our tippet.

If the sunlight wasn’t good for spotting fish on the flats or we simply needed a change of pace we had options. After a quick change of the rods we would crouch low in our boat, weaving slowly through dense mazes of mangroves in less than eight inches of water. These exploratory rides led to sheltered lagoons where we searched for rolling tarpon and snook. 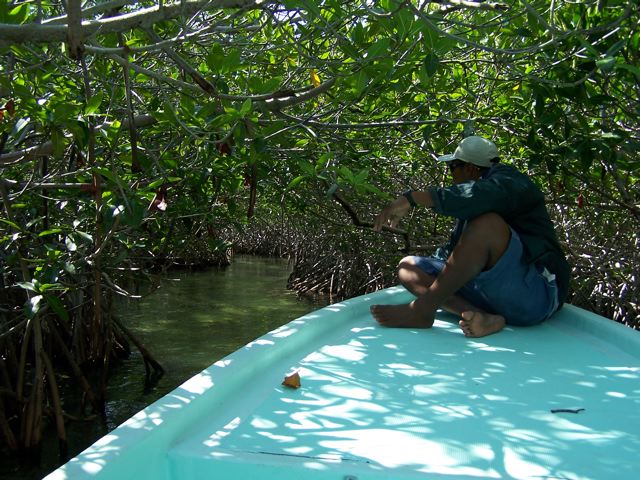 Because of this immense variety it is important to have a strategy prior to hitting the water. A lot of first time salt water fly anglers visit Ascension Bay for the sheer volume of bonefish that can be seen in a day. Others come for the variety and go after the salt-water grand slam – landing a bonefish, tarpon, and permit in a single outing. Others come with a surgical focus on permit, often described as one of the toughest game fish to catch on a fly.

The opportunities exist in Ascension Bay - it is just a matter of being prepared. We never knew what we find as we turned the corner of a mangrove or made our way across a flat. The radical changes in fishing tactics and sudden appearances of species really made for a fun day.

The staple of our trip turned out to be bonefish ranging between one and three pounds. We might have had two or three push into the 4+ lb. range. It seemed the further south we went in Ascension Bay, the less spooky the fish were. We were able to see more fish to the north and in Boca Paila, but these bones seemed really gun shy. In the south of Ascension Bay, around Tres Maria Lagoona and Santa Rosa, we never saw another boat the entire day.

Just seeing the bones, casting to them, and presenting the fly did not necessarily get the job done. We had our fair share of refusals – either because of our fly patterns or our retrieve or a combination of both. Most of the fish we caught were intercepted in groups of twos or threes, cruising a line just a few feet from the mangroves. For the most part, we scoured the water for tails, dorsal fins, and the shadow of the bonefish. 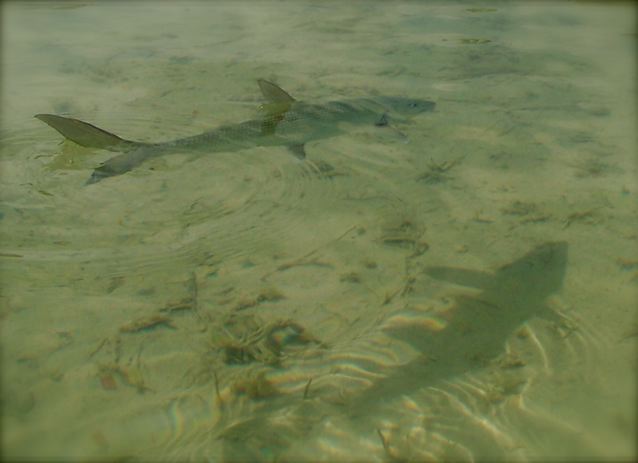 If you are new to fishing in the salt and are interested in getting into a wide variety species Ascension Bay is a great option. Rumor has it that there are more salt water grand slams in Ascension Bay then anywhere in the world. After spending only six days in this fishery my guess is that the rumor is no rumor. If nothing else, Ascension Bay is a land of opportunity.

For more information on Ascension Bay and details about all inclusive guided trip options at the Pesca Maya lodge, check out Fly Water Travel's site. Here are the quick facts:

If you have any questions about fishing in Ascension Bay, don't hesitate to call the shop or stop by.