Geoff Mueller is the former managing editor of Fly Fisherman Magazine and currently senior editor at The Drake Magazine and a contributing editor at Angling Trade Magazine. A few weeks back Trout's Fly Fishing was lucky enough to recruit Geoff as an assistant burger flipper for our Customer Appreciation Day. Geoff has fished in the Arctic, Cuba, Mexico, Belize, Honduras, the Bahamas and more, and spends most of his on-the-water time chasing and studying trout in Colorado and Wyoming. If you didn't get a chance to catch up with him at our event you are in luck - we were able to spend a few minutes with Geoff after the grill cooled down to get the low-down on Abel gear, toxic margaritas, the High Park Fire, G4 Pro Waders, and plans for permit in October. 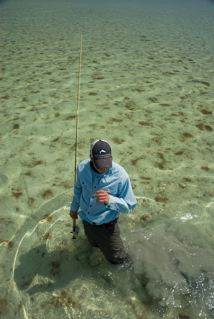 Trout’s: Tell us how you ended up writing for and editing the Drake Magazine?

GM: The short story is I needed a job and I’d met this diminutive, bespectacled dude named Tom Bie on a media boondoggle in Mexico. We got really sauced-up one night and in the process of plotting world domination decided it would be a good move for me to leave the East Coast and hole-up in a dank basement suite in Fort Collins... to grow my career with the most forward-thinking magazine in flyfishing. Bie landed a big permit on that trip and won a custom Abel reel for his efforts, while I drank toxic margaritas and watched my fishing buddy catch a snook and a couple of snapper in a brackish side-channel.

The longwinded story is I started as a starving reporter and newspaper editor in the British Columbia hinterlands—covering junior B hockey, schoolboard meetings, and a housing market crash prompted by a mass melting of high-end igloos. When Fly Fisherman Magazine, based in Harrisburg, was looking for a new associate editor I threw my hat in the mix, thinking that A) This might lead to more fishing, and B) How bad could Harrisburg really be? The fishing mostly came to fruition and the answer to B is Harrisburg is totally awesome... for Amish people. After three years in H-Burg and a massive changing of the guard prompted by a new publisher I found myself jobless, but with a bona fide chance to reinvent and move forward with a scrappy, irreverent Colorado-based publication known as The Drake. Under the editorial tutelage of Tom Bie, we’ve taken the magazine quarterly and we continue to ramp up our online and social media offerings with a tight-knit team of writers, photographers, IT collaborators, drifters, squatters, and addicted anglers. I like working for a magazine more focused on the experiential, culture, lifestyle, humor, and strong storytelling over those that want to tell you exactly where to fish, and how to do it when you get there. Good fishing to me has an imaginative quality to it. Great fishing doesn’t necessarily mean catching bushels of fish. There’s a strong fXXk-up element to fishing, which can be just as entertaining, perhaps more. I hope that shows in the product. 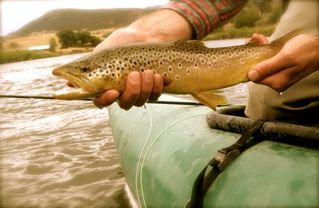 Trout’s: You guys are HQ'd in Ft. Collins and you fish the Poudre quite a bit. What was the fire like and has it impacted the fishery?

GM: This summer's High Park Fire began as a billow of smoke rising behind Drake HQ one Saturday morning. We actually floated the Poudre from filter plant to picnic rock that afternoon and the fishing was great. In the weeks that followed strong winds, beetle kill, and bone-dry humidity helped fuel the ignition of more than 80,000 acres just northwest of Fort Collins. Highway 14 up Poudre Canyon was closed to all motorized traffic. Since it's reopened the lower end of the fishery remains choked with ash, debris, and sediment from rain slides, etc. But I still see a handful of people fishing within the toasted zone. Upstream of the burn, the fishery has been generally unaffected. Ultimately we’ve been lucky. But it’s been a bad season for fires across the West. I recently drove through Yellowstone National Park and Jackson Hole, where the view of the Tetons was completely clouded by wildfire smoke. It will be interesting to follow the effects on fisheries—and my lungs—through 2013 and beyond.

GM: I can honestly say that 2012 has been my best fishing season in recent memory. Highlights include a handful of permit from Belize in February and a wild steelhead buck that came from swinging the Hoh this past spring. Fish in our local Wyoming and Colorado waters are in exceptional shape from last year’s high-water events. I’ve had killer days on the Platte system and have spent some time in the backcountry this year—including a short fly-in adventure on the Middle Fork Flathead for cutts and bulls. The biggest highlight, however, has been getting engaged to my fishing fiancé... other than the fact she always catches bigger fish than me. I wish she'd stop that.

Trout’s: Any piece of gear that has been working for you well?

GM: I like my Simms G4 Pro waders—they don’t leak. I fish a Hardy Perfect on my Spey rigs. I like the old ones because they ooze history and they’re really loud. My Abel nippers are pretty rad, too.

Trout’s: What's up next for the Drake and Geoff Mueller?

GM: I’m leaving for Key West on Saturday to fish for permit on some good October tides. I’m also learning how to pole a flats skiff, and you can look for those ramblings in an upcoming issue of The Drake.