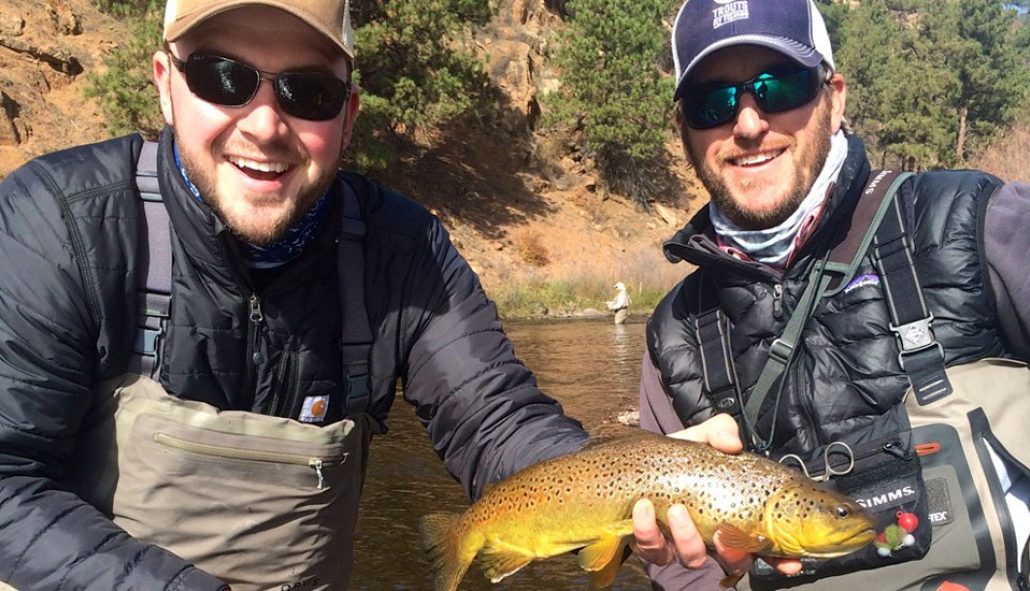 Saturday's at Deckers can always be a roll of the dice when it comes to the crowds. It's pretty much a guarantee, even on the coldest days, to draw a crowd. With the weekend forecast calling for nearly 70 degrees and sun, paired with the fact that Peyton was set to break Brett Favre's touchdown pass record the following day, I figured there'd be a handful of people looking to get their fishing done on Saturday.

I met up with my two customers, Jay and Scott, at 7am Saturday and we headed south down the highway towards the river. The morning was brisk and the coffee hot as we discussed....what else but fishing! Jay and Scott were in visiting with their significant others from Ohio and decided to kick the trip off in style by choosing to spend a day with Trouts Guide Service. The ladies were set to go horseback riding while the guys fished and everyone in the grey 4Runner headed towards the South Platte came to quick agreement that we had the better end of the deal. Both accomplished fly fisherman around their home state, the pics of 40" Northern Pike, Great Lakes Steelhead, Smallmouth Bass and Carp being passed around the car on the drive made me think a midwest road trip needs to be added to the list.

But on to the fishing, we were looking to get Jay and Scott into their first ever Colorado trout and our destination was Deckers. I felt confident that given the conditions, we'd be able to have a great day of sight fishing. As we headed up river towards Trumbull to start the day, the energy in the car was quite high and I was excited to get to fishing. Saturday was marking what might just be the end to my guide season and I wanted to end on a high note. I'll be headed to Montana for a little fun-fishing later this week and don't have another trip on the books as we move into November. While I realize this could always change, as of this writing, my season is done until most likely March. I wonder what I'll do to pass the time.....oh yeah, go fishing! 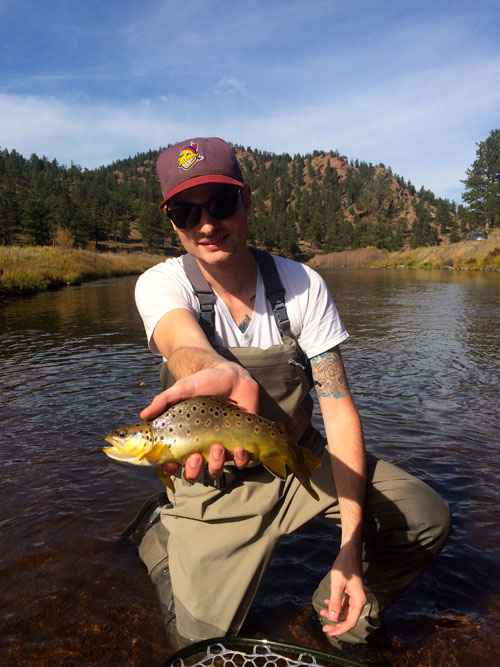 The place I planned to start that day already had two cars in the parking lot as we arrived so we continued on up another half-mile and found a good spot to kick things off. After a brief tutorial regarding (what I call) the "Deckers Soft-Strike" the fishing was underway. Scott was first to strike that day and landed a chunky 13" Brown Trout. This scrappy little Brown also marked Scott's first Trout ever on the fly.....I know I know....who catches Carp on the fly before a little Brown Trout? I guess people people who don't have the South Platte flowing 40 miles from their doorstep. We fished on, working downriver and were able to sight fish several other nice Browns before deciding to switch up locations. Jay hooked into a VERY nice Rainbow in a shallow trench close to the bank but forgot we were fishing Trout with 5x instead of Carp with 1x! We were forced to simply settle for a good look at the broad shouldered 'Bow before it snapped the line and swam off with a new size 18 lip ring.

As the day progressed, we kept our eyes out for any signs of a hatch, however given the conditions didn't expect to see much. A brief Trico flurry around mid-morning, a few BWO's here and there....but nothing ever really got going. From a fly perspective, worms, eggs, baetis nymphs, and midges all caught fish. Given the lack of insect activity, the fish seemed to be picking around on whatever food source was available and never really dialed into a particular pattern.

Arriving at a fairly reliable source to find fish feeding on the surface, we were pleased to see a few noses sipping something microscopic close to the bank. Jay spent nearly an hour sight casting to these steady feeders....but unwilling to go to a size 40 (or whatever micro-bug they were sipping on) we decided to let them go. We nymphed up a few more trout in a nearby run but couldn't help but continue to glance back at the risers. Having enough of it, Scott headed back towards them with his nymph rig and proceeded to hook a 17" Rainbow on his first cast with a San Juan worm. I'll let you draw the conclusion as to what this means- that a trout would refuse repeated perfect presentations with a small dry fly only to attack a fly you know it's seen a thousand times over the years. I guess that's fishing for you! 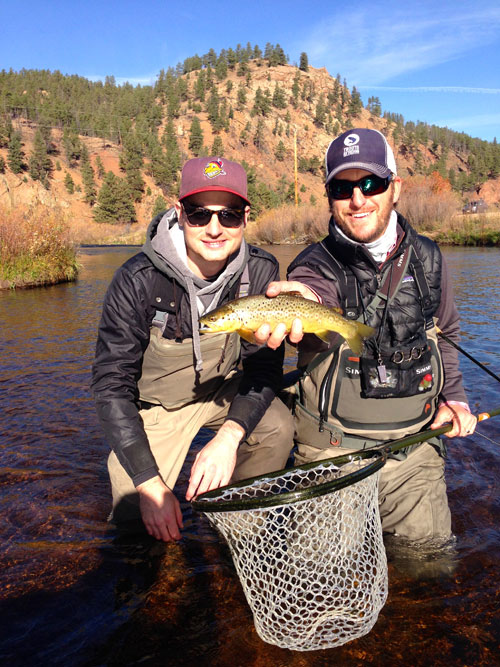 As the light began to fade, and the impending drive back to Denver closing in, Jay decided to spend a little time with a streamer tied on the end of his line. Just before having to call it quits and head for the car, a very large fish rolled/attacked/pick your term his articulated bunny fur but never found connection. Is there such thing as a more textbook way to end the guide season? Trout have a funny way of always leaving you wanting more.

We did see a couple pairs of Browns up on beds throughout the day and this should be the case for the next little while. I know it's been said a hundred times, but to all anglers heading to the river in the near future, please respect these fish and let them do their thing. Take out the camera and get a few shots of nature at work and enjoy the moment. Take satisfaction in knowing you did the right thing and as a result, there's a good chance you'll have even more Brown Trout waiting for you in the future!