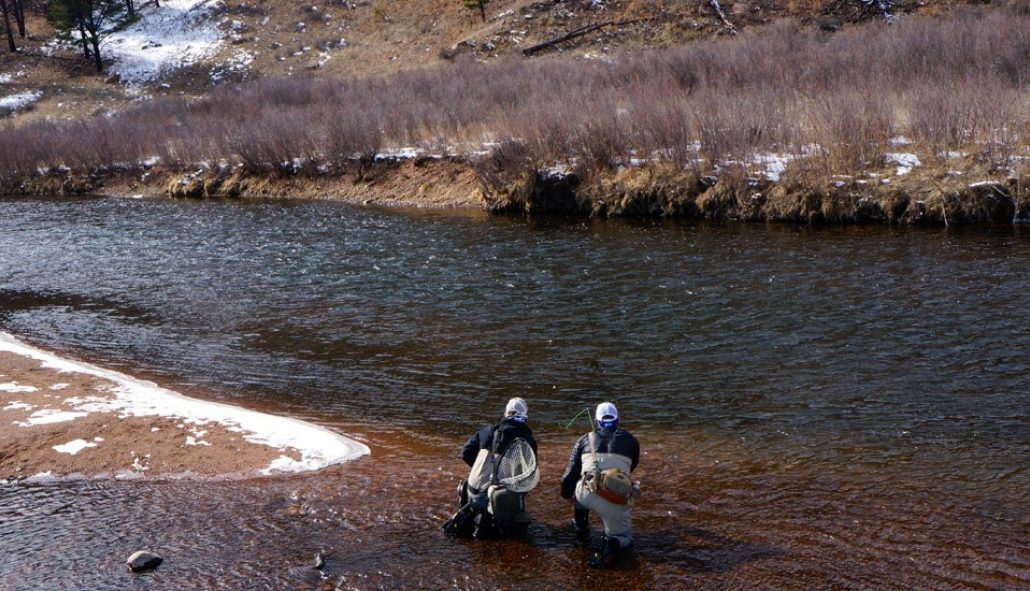 Now, don’t get me wrong, I love taking everyone fishing from the complete first-timer to the world travelled angler, but there’s just something extra special about taking a new-to-the-sport angler out that is working hard to improve their skills. These budding anglers are always a sponge for information from the minute we put the boots on until the minute we take them off. I just simply love it.

My customer for last Saturday was local angler and shop regular James Ryan. A long time Coloradoan that had grown sick of ski traffic and played every golf course around the state countless times, James turned to Trouts to get him up to speed on the great sport that is fly-fishing. He had hit the river a few times prior to our trip, however decided to speed up the learning curve by hiring a guide (which I have to agree is without a doubt some of the best money an angler can spend….shameless plug for our Guide Service, I know)

Our day on the water had been on the books for a while and I was excited when my alarm went off Saturday morning to get to the river. We met in Sedalia, pleasantly surprised with the abundant sunshine gracing the morning. The layers of clothing packed into the truck for the day were plentiful, as the temps were not expected to get above freezing. I had planned to start our day around Nighthawk Hill however upon placing first glance on the river, quickly realized this wasn’t going to happen. The South Platte looked like a giant slushee….ice, ice and more ice. No big deal, we’ll head upriver and find some open water. Little did we know how optimistic of a thought that would be. My truck said 1 degree as we parked just below Trumbull Bridge to start the day. There was still a lot of ice on the water, however we were hopeful the bright sunshine would help melt a little of it. I won’t bore you with all the details of frozen guides and frozen-er fingers and toes, but let’s just say it was damn cold those first few hours. Getting a drift was near impossible and it seemed you had to cast between the floating chunks of ice to get a drift. James stayed determined and we continued on trying to find some hungry fish.

By early afternoon the sun had made the river a little more fishable and we were even beginning to see a few feeding fish. The first fish to eat that morning caught us both by surprise and took us for a wild ride that unfortunately ended up with some broken 5x….I blame it on the ice. James really wanted to learn more about sight fishing and we spent the rest of the afternoon searching for feeding fish and casting to them. Thankfully enough, our plan turned successful and by the end of the day we found multiple fish in the net- all of which were caught sight fishing. Around about 4:30, after releasing another Rainbow, the setting sun and dropping air temps finally made us wave the white flag and head for the truck. So with that, a huge ‘two thumbs up’ to James for sticking it out and getting the job done on Saturday! I have no problem admitting it…..between the ice, frozen temps and frozen extremities, that was one of the toughest days I’ve ever seen on the S. Platte. In the end though, it’s always a sweet feeling of success when your hard work pays off. All I can say to the trout of the South Platte and beyond is to watch out….there’s an up and coming threat called James Ryan coming after you.

Oh...and if you're wondering how we got the photos with both of us in it, Dave from the shop happened to run into us on the river at the perfect moment to document successfully sight fishing a beautiful Brown Trout that was just a fraction of an inch shy of hitting the 20" mark. 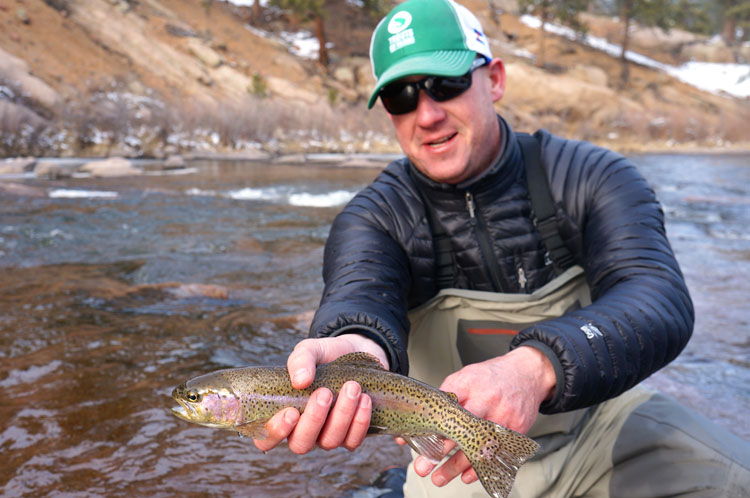 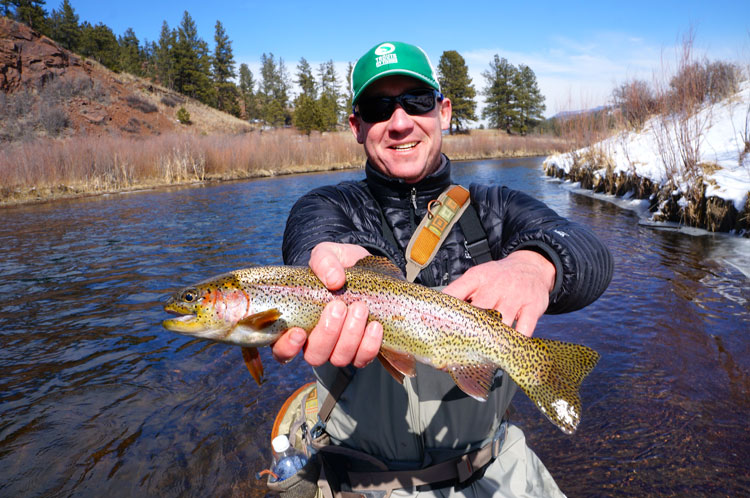 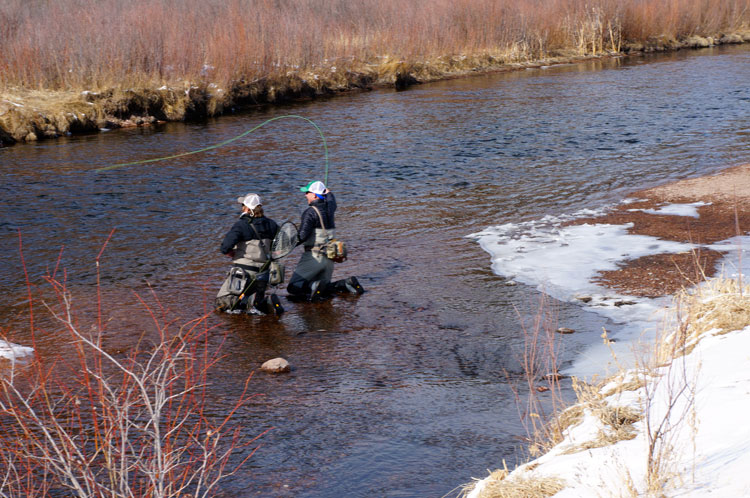 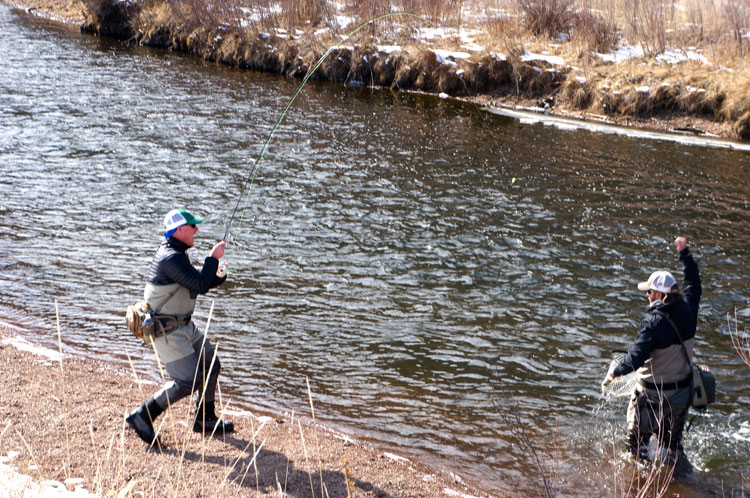 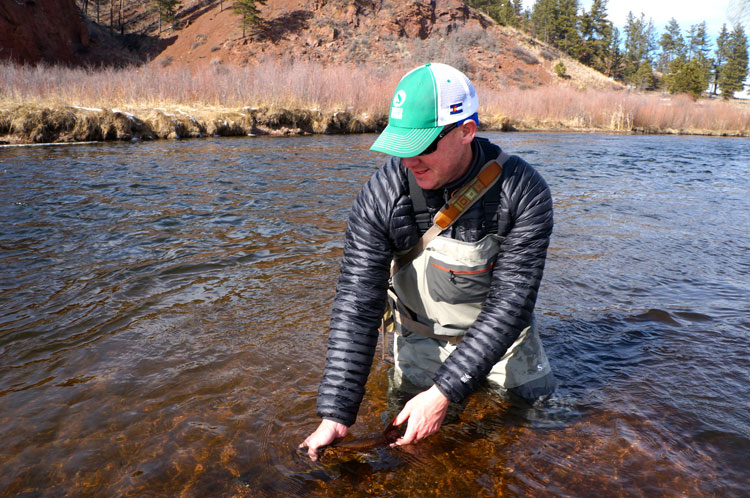 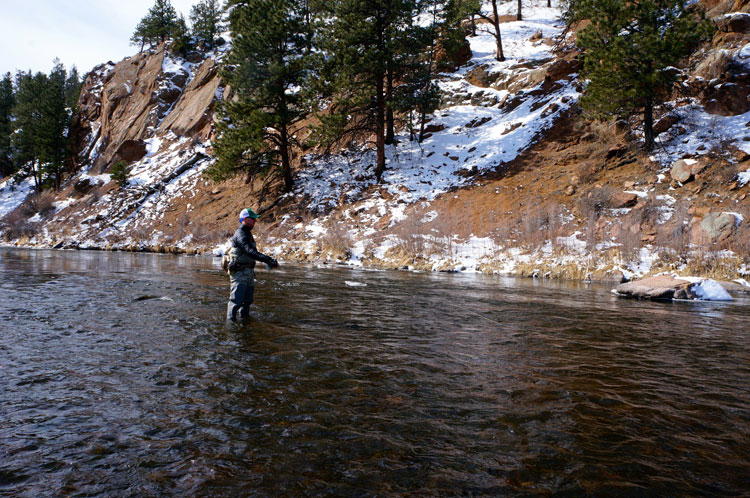