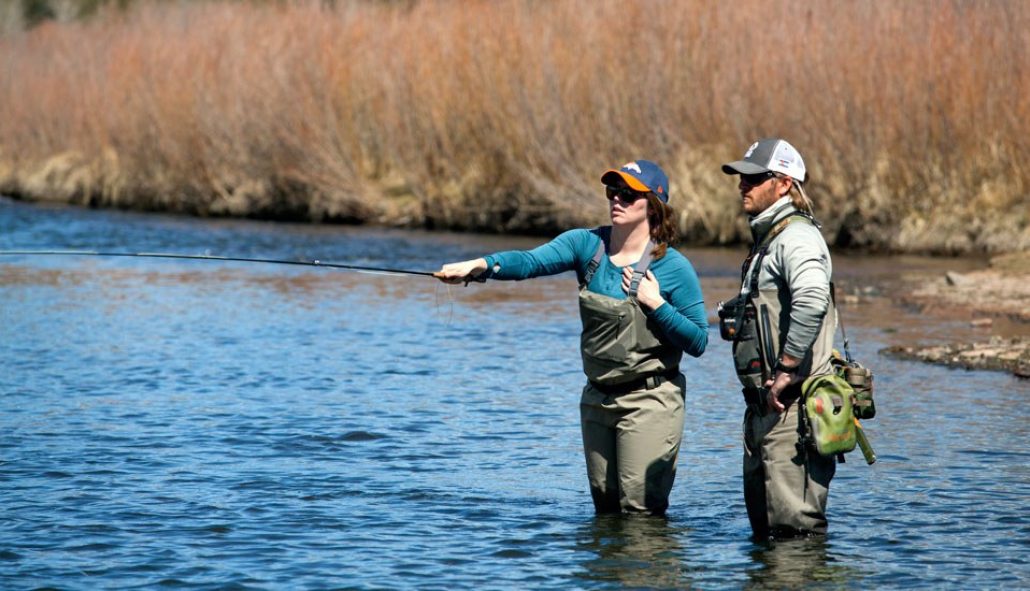 Last Friday was one for the Trouts Guide Service books to say the least. I was sitting at my desk on Thursday, when the phone rang. It was local angler Celia looking to book a last minute (as in tomorrow!) trip for herself and 3 good friends. Celia was already an accomplished fly angler, however her 3 counterparts had never spent a day with the fly rod in hand before. The fishing has been pretty phenomenal lately and given the fact we're not into the 'busy season' yet, the last day request was easy to put together and both Scott Dickson and myself were eager to take the trip. Scott and I both love teaching brand new anglers and given the fact that A) we were fishing on a weekday and B) the weather forecast couldn't have been better, we were both very excited to hit the river the next day with this group that (you could tell by Celia's enthusiasm) was sure to be a good one. But wait I'm not done. A few minutes prior to receiving Celia's call, I received another call from a gentlman by the name of Ted Stedman, a writer/photographer for Denver Living Magazine (along with countless other media sources). Ted was looking to do a little story about fly-fishing and asked if I'd be interested in spending a few hours on the river in the near future. He was interested in learning about the evolution of the sport, the trends we're seeing, and in general just discuss the overall state of the fly fishing world....oh, and another area of emphasis was women in the sport. After getting off the phone with Celia, I gave Ted a call back. "Hey Ted, I've got a 4 person guide trip tomorrow that's all women. Want to tag along and photo/document the day?" This was clearly music to his ears and he eagerly jumped on board. Talk about all the stars aligning.

We met in Sedalia the next morning and unfortunately (literally the only strike on the day) one of the 3 anglers Celia had invited was unable to attend at the last minute. We now had 3 eager women fly-fishers, 2 more-eager fishing guides, and one professional writer/photographer. After making the appropriate introductions, our caravan was southbound towards Deckers with the sun shining overhead. We fished the Trumbull section for the majority of the day and it didn't take long for Celia to show the two 'newbies' exactly how it's done by putting a 21" Rainbow in the net! (disclaimer- the photo was taken on her cell phone. As soon as I receive it, it will be added to this report. It was an incredible way to start the day!)

There wasn't much bug life during the morning hours and the majority of the fish we picked up were eating small, red midge patterns. Around mid-morning, and continuing through mid-afternoon, the Baetis decided to show up and the fishes attention quickly turned to these tasty little mayflies. We experimented with San Juan worms and egg patterns as well and by afternoon, an egg pattern followed by a baetis nymph proved to be the rig-du-jour and we were beginning to lose count of how many fish we'd caught. To top it all off, the two first-time anglers, Anna and Lisa, not only got their rod bent many times over, they both were able to successfully sight fish multiple trout throughout the day! I'll always consider it a success when you start the day with someone who has never touched a fly rod, and by the end of the day they are actively spotting fish holding in the river, casting directly to them, and subsequently hooking up. It just doesn't get better than that! 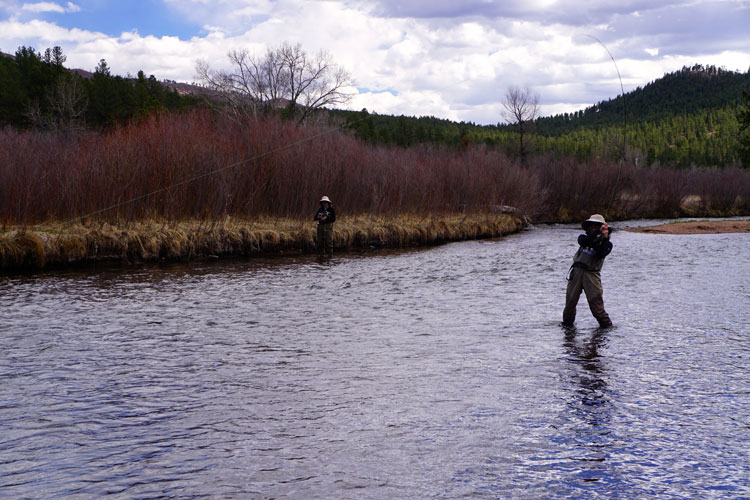 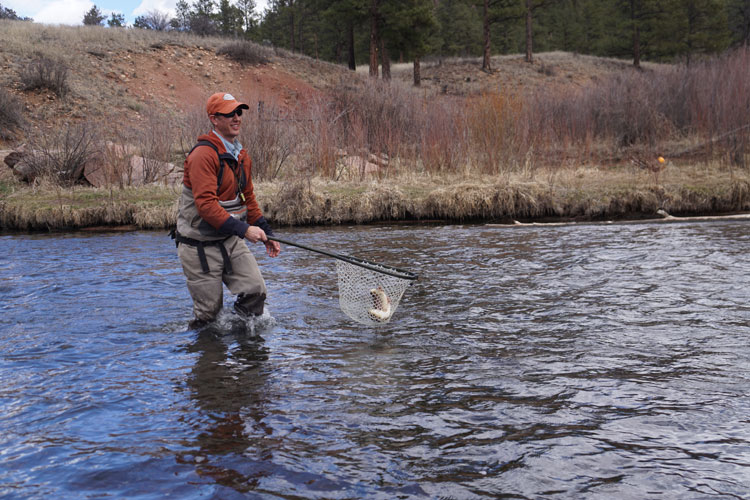 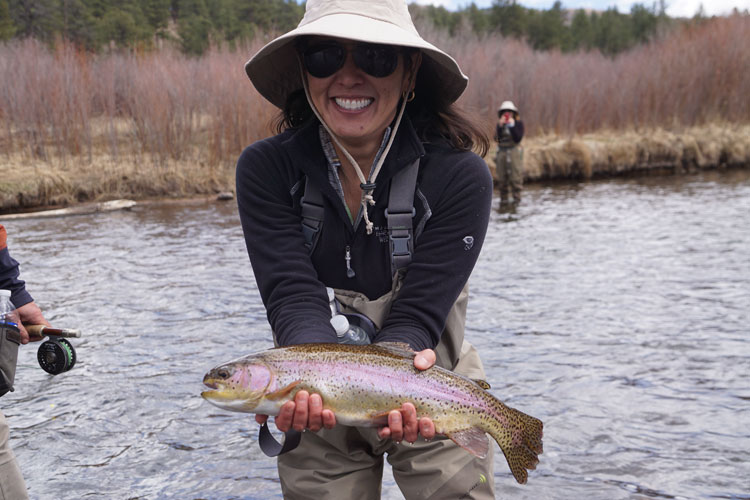 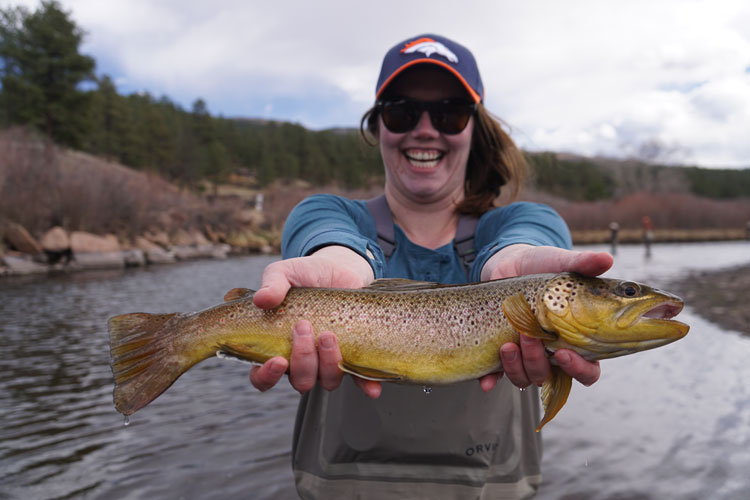 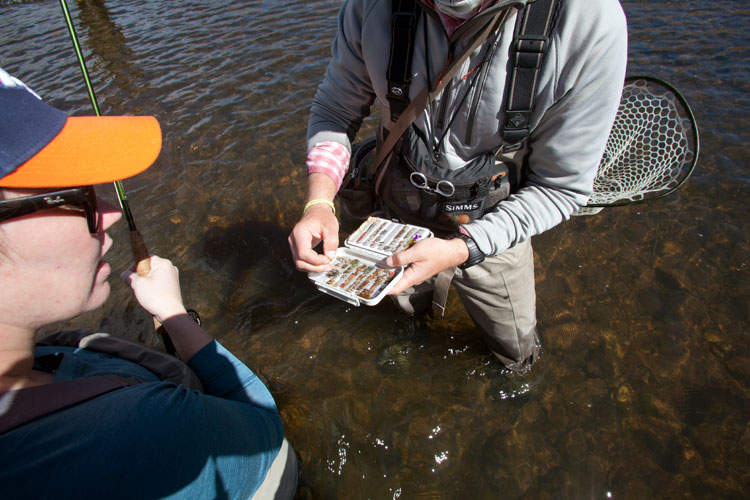 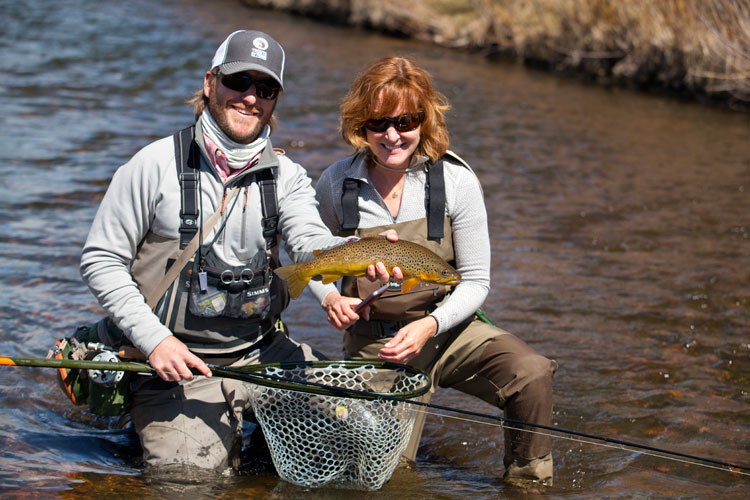 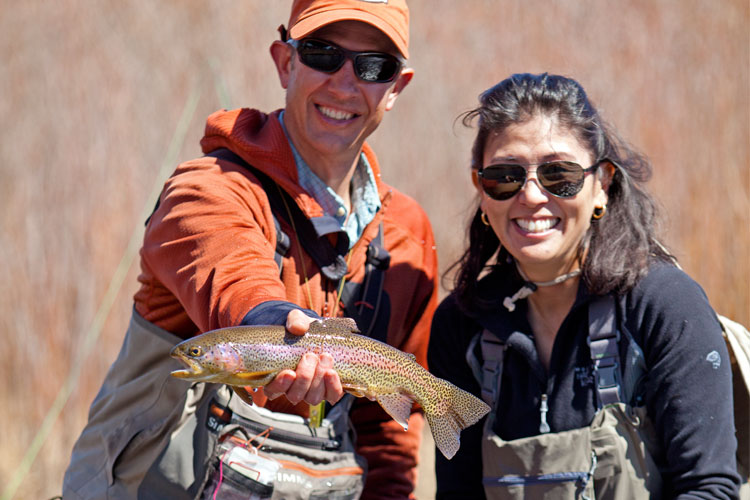 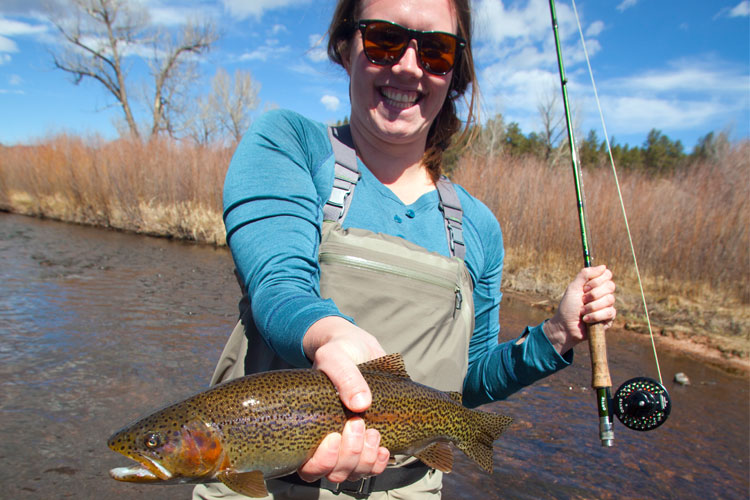 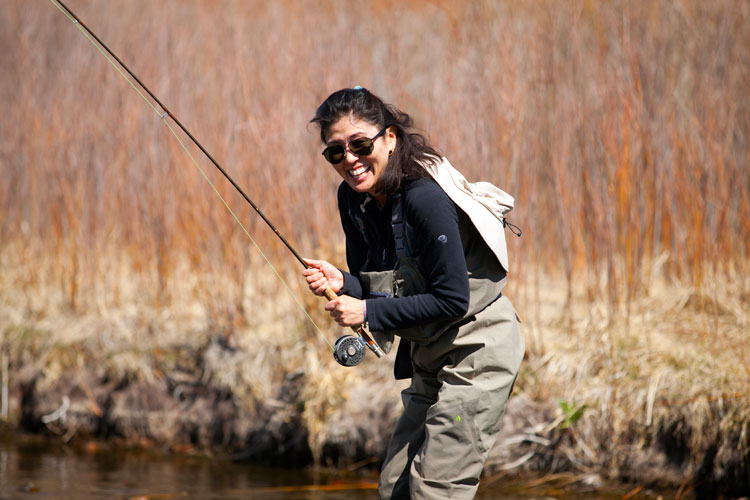 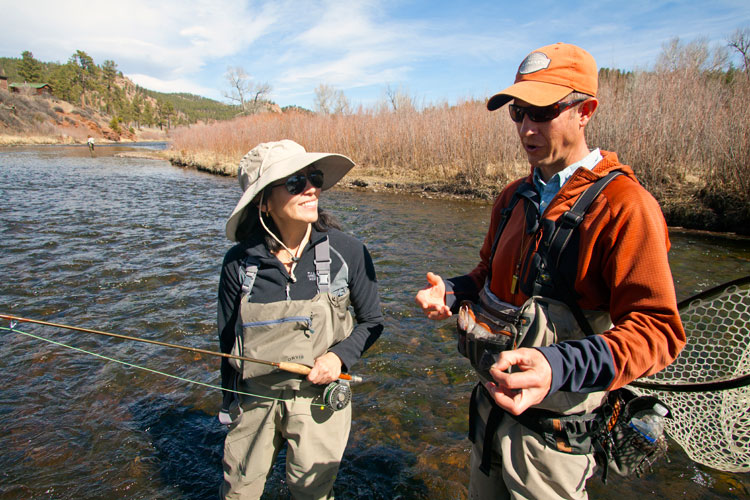 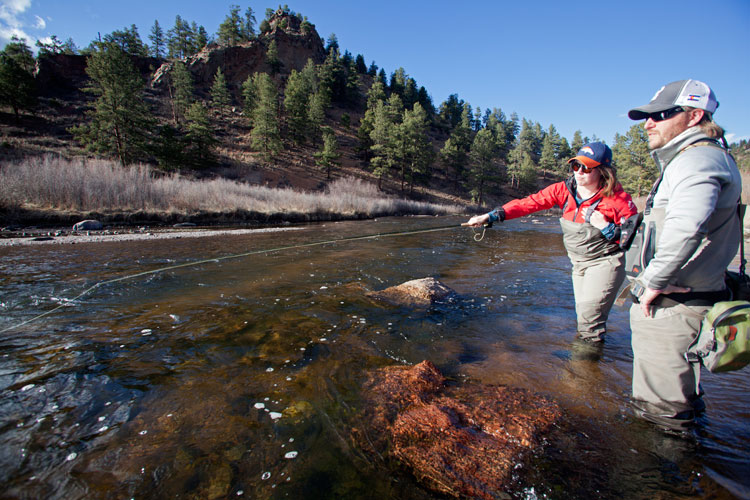 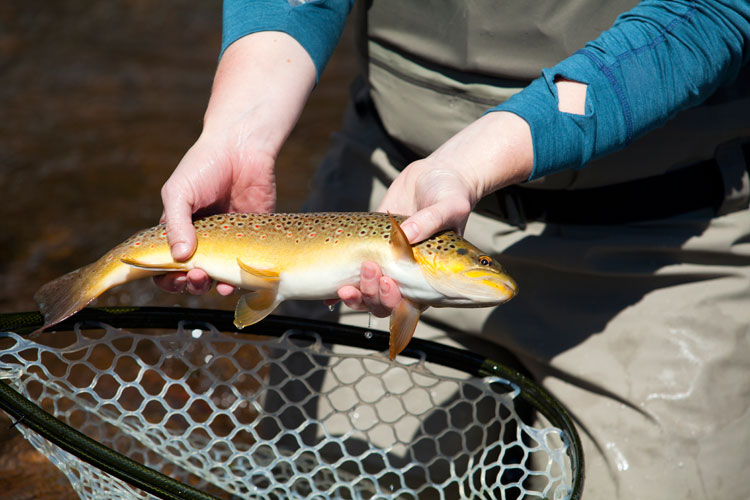 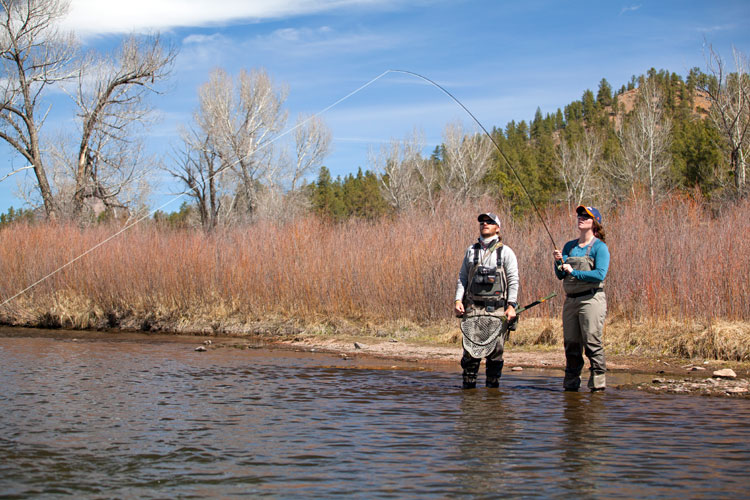 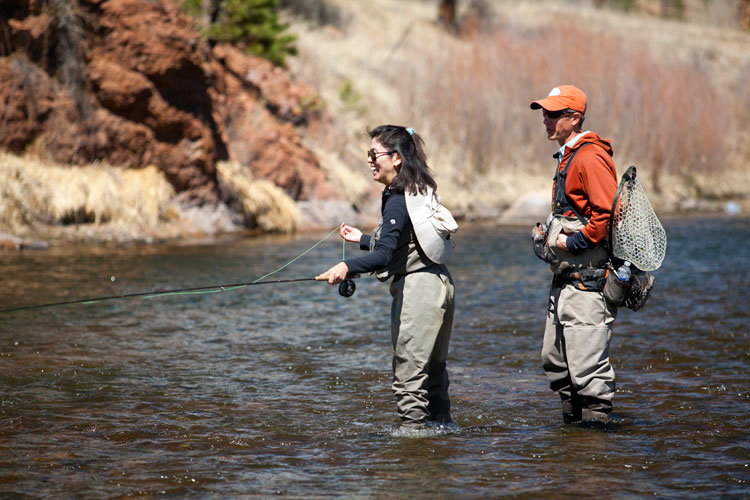