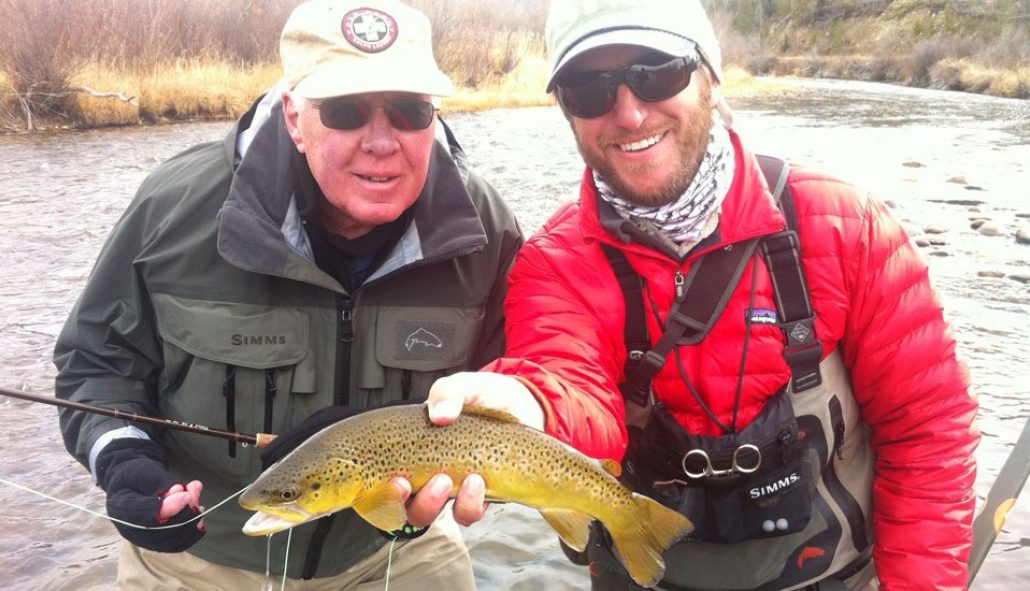 Anyone who has been on the water lately has probably experienced a common theme.....fishing has been REALLY good lately. Thankfully, this past weekend up on the Fraser River fell into that category as well. I had the pleasure of spending a day with local residents Rich and Chris up at the Granby Ranch, one of our Exclusive Properties. This father/son duo was looking to explore some new water and get away from the crowds that can accompany public waters paired with a weekend. The Fraser River and Granby Ranch fit that bill perfectly.

We met at 8am and decided a quick and healthy McDonalds breakfast was in order before descending upon the river. After getting layered and rigged up we hit the trail on Beat 1, heading downriver. After an easy 10 minute walk we approached a spot that seems to always produce. 3 or 4 casts later, Rich hooked up with a nice 14” Brown trout that absolutely attacked his egg pattern. Given the cold and cloudy conditions, I figured it would be some combination of Eggs, San Juan Worms, Baetis nymphs and Midges that would produce. The nice thing about having two rods fishing is it provides the opportunity to really narrow down productive patterns for the day. After Rich quickly got up 3 fish to 0 on Chris with his egg/midge rig, the mystery of what the fish were keyed into was quickly solved. We continued working upriver, catching some more fish and trying to stay warm. It was quite chilly, somewhere in the high 20’s/low 30's, and breaking ice off the guides every few minutes was a necessity. Sure had been a while since I’ve had to do that.

The deep green buckets on the Fraser are always guaranteed to hold fish, however I really wanted to spend time exploring some of the shallower riffles and drop-offs as well. With the Brown Trout spawn being upon us, I figured we’d find fish positioned shallow and feeling aggressive. While we never saw anything really even resembling a redd or even paired up fish, finding trout in the shallow oxygenated riffle water was very productive and put several nice fish in the net. Before we knew it, my watch showed 12:30 and we decided to break for lunch and head to beat 2. The sun finally decided to show up around midday as well and according to the temp gauge in my 4Runner, we’d gained almost 25 degrees. It was nice to shed the down jacket and stocking cap for the afternoon and we had high hopes that the warming weather would get the fishes appetites going even more than they already were. 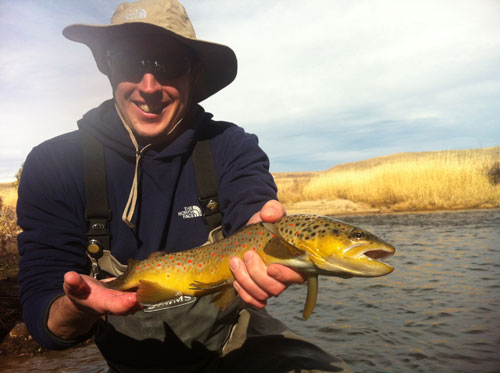 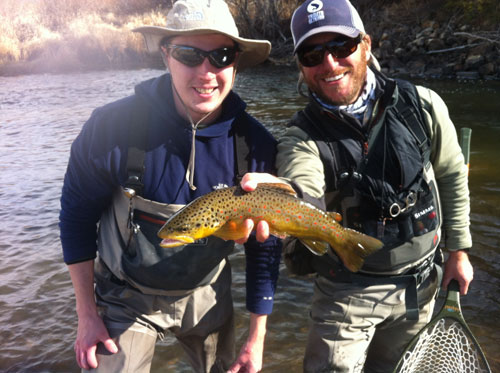 We never saw much in the way of bug activity throughout the day, however the egg and midge combo continued to produce. After working upriver through Beat 2 and adding several more nice Brown Trout to the days total, the sun finally began to set and the bite slowed almost as instantaneously as we noticed the air temps headed back down. It may just be me, but this is one of the things that makes trout fishing so appealing to me. No two days are ever the same and it’s so intriguing how the fish under the water can be so in tune with what’s going on above the surface. You got to love it!

Fishing is very good right now and Trouts Guide Service is still getting on the water almost daily. Give us a call, swing by the shop, or book your very own guided trip here today!