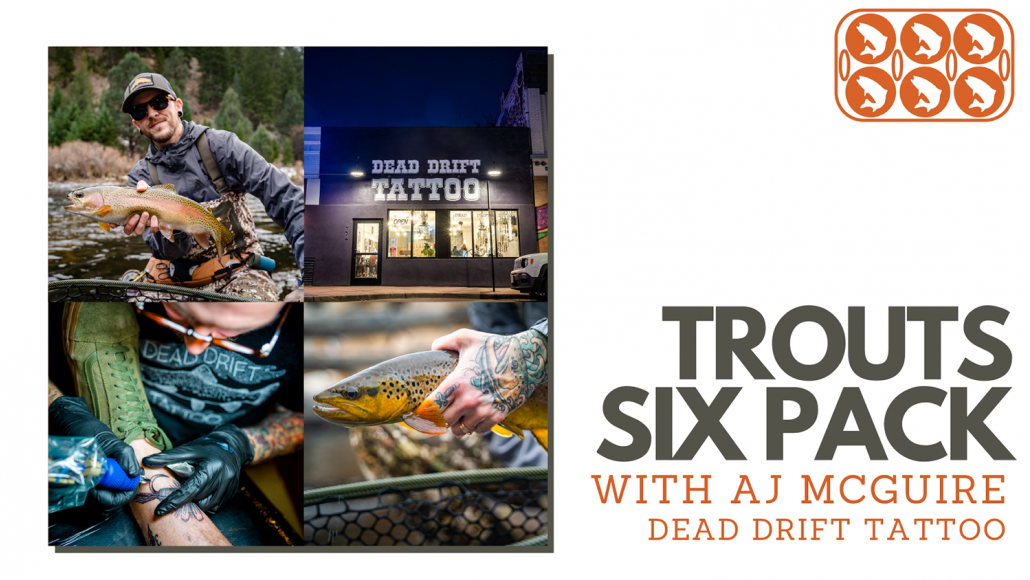 Five years ago, I met AJ McGuire who now owns Dead Drift Tattoo. I had been circling around the idea of getting a brown trout tattooed on my forearm and a mutual friend of ours directed me his way. "He fishes and he's got a good hand" she said. My interest was piqued. I had been scrolling through Instagram for months looking for a tattoo artist that had a catalog of good looking fishing tattoos and I was striking out, especially in the Denver area. Fast forward a couple of months and AJ had inked a certain Big Hole River living brown trout on my forearm. NO RAGRETS!

Fast forward to 2020 and AJ might be the unofficial tattoo artist of Trouts. Myself, Rick, and Jack all rock some fishing related AJ ink. If you've been in the shop over the last three years, chances are you've seen his work. With an infectious enthusiasm for tattooing, fishing, and life for that matter, AJ is an avid angler who spends his off days on the water trying to fool a trout or three. While his artistic talent is apparent, he also has a talent for describing big fish with some of the most northwestern New York terms of all time.

Late last year, he joined Scott Dickson and I for a day in Cheesman Canyon. Check out some photos from the day and learn a little bit more about AJ as he answers a six pack of questions!

The shutdowns associated with COVID-19 have hit the entire service industry pretty hard and tattoo artists are definitely feeling the pain of an extended shutdown. If you need hand-tied flies, artwork, wanted to get a gift certificate, or get a date on the book, reach out to AJ at Dead Drift.

Trouts: How did it all start? When did you pick up start your career as a tattoo artist?

AJ: I started tattooing in 2007 and knew it was for me as soon as I tried it. I was living in Buffalo, NY after graduating from college with a BFA, and had a few other art-related jobs that I didn’t love. I decided to make the move to Denver to learn and grow, and was luckily enough to get a tattoo apprenticeship. Once I got my foot in the door, I just kept on moving up from there. I opened Dead Drift Tattoo in August of 2015, and now I’m living my dream life every day.

Trouts: How about fly fishing, what got you started in our realm?

AJ: I used to fish a bunch when I was young and loved it, even though I mostly only caught sunfish and small bass. Fly fishing was always something I wanted to try, and it fit in naturally with my new found love for the mountains when I moved out here. I was hooked as soon as I tried it, and wanted to learn everything about it. It’s become a big passion of mine- I not only spend a lot of time fishing, but also reading about it, looking up places to check out, and tying flies.

Trouts: As a Buffalo Bills fan, how many tables have you jumped through?

AJ: Believe it or not, I have jumped through zero tables! That trend started after I moved away, which is probably a good thing. Younger, college-age me wouldn’t have thought twice about smashing anything. I’ll tell you what though- if the Bills win the Super Bowl I’ll be jumping through a table without a doubt!

Trouts: What parallels do you see between tattoos and fly fishing?

AJ: Tattooing and fly fishing actually have a lot of similarities. For both, you need a lot of patience and dedication. Both require you to spend a lot of time practicing, learning, growing, and also failing in order to be successful. The payoff is big and exciting, whether it’s a tattoo you’re really proud of or the fattest tank you’ve ever had in your net. Tattooing is obviously art, but so is fishing - The way the line looks when you cast, the scenery around you, the flies in your box, the beautiful colors and patterns on the trout...nothing but art.

AJ: Most memorable angling experience was on a solo trip to the Dream Stream a few years ago. I hooked into a big one in the bridge hole and it started diving down deep. I had on 6x fluoro so I knew I had to play it just right. When I finally started to wear the fish out and it came up near the surface, I could see that it was a Kokanee. It was late summer so it wasn’t spawning, and man did this fish have some fight in him! I finally got him in the net and couldn’t even get my hand around his chonky body. I was so excited, my hands were shaking!

Most memorable angling tattoo was a brook trout I did on my friend Will. It was the first time we met and it took several hours, so we got to chatting and were basically friends by the end of it. He was pumped on the tattoo because it was meaningful for him and I was pumped because I got to tattoo a big brook trout! We went fishing together a little while later and now he’s one of my best fishing buds. We’ve had some fun trips and have caught some really nice fish together. He’s gotten more fly fishing tattoos from me too since then, and he’s become a great friend. Never would have met him if he didn’t come in for that tattoo!