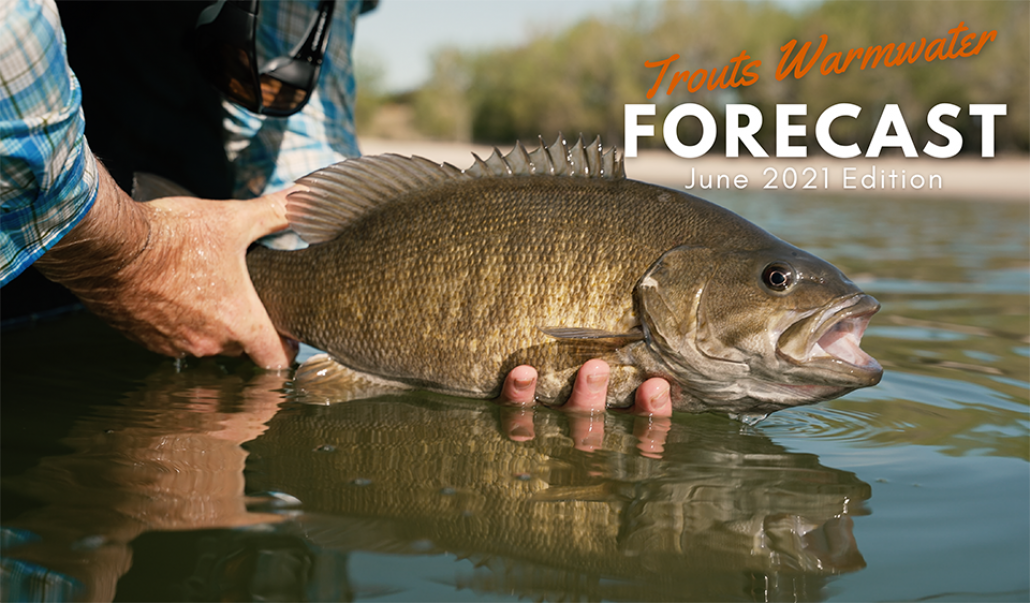 The “Wild Weather Train of 2021” continues... according to the Denver Post: “Denver has been wetter than Miami and cloudier than the Pacific Northwest this spring. It has been the wettest start to a year since 1983.”

On the bright side, ambient temps are warm enough now, that the fish don’t really care! June is the best month for all warm water species in this state, and while many of your favorite trout rivers are blown, all the front range and lower elevation mountain fisheries are in full swing.

Not much has changed in the mighty South Platte, we are still seeing much higher than average flows from rain and increased outflow from urban reservoirs, which has kept the river clean of early weed growth and added plenty of cover to keep pressure down. Smallmouth will likely be post spawn by the time of publication, and smallmouth fishing can be epic as water temps rise. Smallmouth fishing in the DSP is a game of persistence, as they can be highly transient. As a black bass, they are structure oriented, so rockpiles, riprap banks, submerged trees, and manmade structure, bridge pilings, shopping carts are all likely holding spots as they provide great ambush points.

Covering water is the name of the game, and an intermediate or short sink tip can really help keep your fly in the zone longer. Baitfish (Clousers/Deceivers) and leeches are my go to flies, and a varying speed retrieval with short strips and plenty of pauses, seems to elicit the most strikes. There are some very high-quality smallmouth in the river, approaching the 4lb class, and are really an asset to this urban fishery! If water temperatures normalize, expect the annual spawning ritual to begin near the end of the month. 60 degrees seems to be the magic number for DSP carp, but the range is as broad as 55-75. We have seen some females begin to breech and loosen egg sacks in the river behind the shop. The DSP Carp population is putting on weight quickly, both from aggressive eating and fast-growing egg sacks in the females. The biggest Carp of the year are caught in April, and it is the best time to break the high 20lb to 30lb mark!!! Read more about strategies for fishing the carp spawn in the ponds section below.

Temps are about as ideal as they get in our small lakes and ponds. Perch and panfish are coming to life for the season and will eagerly take just about any fly you can throw, so long as it has a little flash, and they can fit it in their mouths. Large schools of perch and crappie can be found near structure, and can provide almost non-stop action once you find them.

Bass are on beds now, you can find out more about the ethics of bed fishing in last month’s report. As the month progresses, they will move off their beds, after a trying spawn, and begin to recoup lost calories. Early summer bass fishing, before temps get too hot is as good, in the classical bass fishing sense, as it gets. Mid-late June is time to try out all those ridiculous, big bass flies that call to you from our bins! While top water is usually not the most productive way to catch bass in Colorado, on cloudy days, or in weed choked lakes, it can certainly be the most fun. Cast a popper or frog at or over structure or weeds, let the rings clear, give a strong “POP” a good pause, then “POP” again all the way back to you. Not much is more exciting than a big bass exploding on a popper.

The Carp in small ponds are in varying degrees of active spawning for the next few weeks. Fishing the carp spawn is one that there are no ethical concerns over whatsoever. Carp are broadcast spawners, the female broadcasts hundreds of thousands of eggs, and groups of males chase behind, bumping, crashing, back-flipping to be the one to fertilize them and continue their genetic line. It’s quite a spectacle, pods of fish exploding in a fury all over a lake or pond. While fish are actively spawning, it’s a slim chance of catching them, already quite a challenge to put a fly anywhere near the zig-zagging ball of energy that is a spawning group, these fish are much more focused on procreation than eating.

They spawn in spurts, and feed between, so move past the exploding spawners, and find fish feeding aggressively on the edges, hoping to fuel their next roll-in-the-hay.

Fish refueling during the spawn can be some of the least picky fish of the year. Fly selection becomes easier, as they will eat just about anything that looks like something they have eaten before, and there are markedly less spooky. These are the high numbers days we have all been waiting for!

Because of the slooww increase in water temps, the wiper game is still in full swing, particularly in the larger reservoirs of eastern Colorado. If you have not tried wiper fishing, DO IT! These fish demolish flies and pull HARD. Check last month's forecast for more details on this awesome fishing opportunity! As we move to mid-late June, many warm-water anglers will re-focus their attention to northern pike and tiger muskie, in the lower elevation reservoirs of the high country. Pike have a much-beguiled history in this state, and while populations are limited, there are still great opportunities for BIG pike all over Colorado. The tiger muskie in Colorado is even more intriguing. Stocked for nuisance species control, these fish are placed in low numbers in a variety of impoundments and can be considered the most difficult fish to bring to hand in the State. If a true muskie is the fish of 10,000 Casts, the tiger muskie must be in six figures.

CPW publishes annual fishery surveys for many locations in the State, and they can be an excellent tool to find where Tiger Muskie have been placed:

Both pike and tigers prefer water temps in the 58-68 degree range (with tigers more comfortable in the cooler end of that spectrum) and move into shallow weedy bays in June to feed aggressively before they move deep in July. A pike or muskie eat is an amazing display of predatory muscle. They are ambush predators and reserve their energy to explode on prey when the time is right. Watching a fish go from still to full speed, then to see gills flare and a fury of teeth and jaws inhaling a large fly still induces the shakes. Spring is more of a small fly game for these fish, as they are looking for many small meals, and flies in the 4-7” range seem to best producers. Presentation is highly dependent on water temps, with long slow strips and lots of pauses in the early going, to full, non-stop double hand ripping as the water warm. Because of the high pressure and limited distribution of these fish, they tend to not be keen on wire bite tippet. As an alternative, many anglers use 60-80lb fluoro. While relatively tough, you still can lose a monster to a nick in the bite tippet, so check it after every fish to make sure it is not compromised.