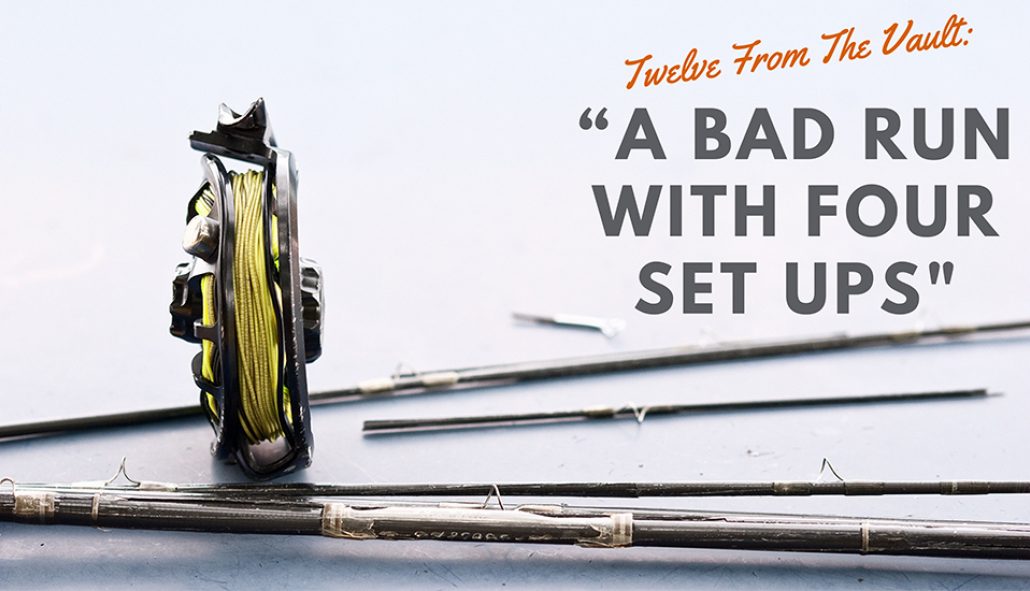 Twelve From The Vault: “A Bad Run With Four Set Ups”
By copi vojta

I had a bad run with four set ups. I was in my early thirties, maybe late twenties, it's all a bit of a blur now and I've blocked out parts of the trauma. I guess you could say it was my trout bum years, a shop rat for Alpine Angling, fishing evenings after work and days off, living in someone else's mom's basement. It became of habit to leave my rigged fly rods on top of my truck après fishing while de-wadering and packing up. A highly dangerous move and in hindsight, I cannot recommend. Where is my rod, I put it in the back, right? The sinking feeling of realizing your own mistakes while driving home is not much fun, especially when involving valuable gear.

One made it back to me via a kind human who came into the fly shop one afternoon. The conversation wandered to lost and found stuff, and they mentioned finding a Sage/Ross reel combo in the Catherine store parking lot. I mentioned I had lost a hand me down Sage with a Ross reel during drake season. Late nights-back-to-the-rig-after-dark-and-no-rod-the-next-time-you-fish kind of thing. Turns out he had found what I'd forgotten and kindly brought it in a week later in fine operational condition. I hope I bought him a few beers as a thank you.

The next two did not have such happy reunions and were obliterated on the freeway. Gaining speed and merging onto I-70 after fishing near Tibbett’s landing I watched through the rearview as an old Orvis slid off the roof and bounced into the left hand lane. I immediately pulled over, hopped out of the truck and ran along the shoulder until I was perpendicular to it. No one was coming and the optimist in me was sure I could run out and swoop it up before any traffic came. I was too late. A caravan of vehicles smoked it right in front of me. A piece of the cork handle rolled to my feet. I couldn't be bothered to pick up the rest of the pieces.

A few months later, or earlier, I can't remember...the trauma block and whatnot; I was fishing in Glenwood Canyon. Maybe there was a good Mother’s Day hatch or maybe I was throwing big home-tied streamers, maybe the fishing sucked. I packed it in and headed home towards Carbondale. Thoughts wandered through downtown Glenwood Springs, I looked over my shoulder for my fly rod and didn't see it. Mild panic set in. I backtracked all the way to the No Name exit. It wasn't where I had parked and it wasn't on any of the side streets leading back to I-70. I finally eyed it on the on-ramp. A Scott S4 splintered into pieces and a Ross Evolution pancaked into the asphalt. I do remember being pretty impressed with what I had found, despite the inner embarrassment and disappointment in the mistake and myself.

The fourth and hopefully last (I'll need to cross my fingers and find some good wood to knock on) wasn't nearly as dramatic as the previous two incidents, but still not much fun. It was the final experience that taught me to never leave anything of value on top of a truck; I'm a slow learner. To this day I'm weary anytime I see something there. I had just moved and was exploring the northwest and the rivers near Bellingham, WA. I was inexperienced at spey casting and slowly figuring it out, albeit poorly. Fishing alone that day, as I often did, and parked a twenty-minute drive down a bumpy, potholed road with bottomless mud puddles the size of small ponds. They're nerve wracking enough to drive through, not knowing what sort of truck-stopping troughs and trenches might be lurking. Abandoned vehicles scattered the rainforest, gunshots occasionally fired from the nearby shooting ranges, a pretty appealing locale. I packed it up and headed to fish one more spot downriver and once back on the highway realized the Scott L2H and Lamson reel was not riding shotgun. I turned around, backtracked, eyes out the window on the slow four-wheel drive in, hopping out before each rutted puddle, carefully walking zigzags through them hoping to gently kick a rod, thinking it may have bounced off while navigating the puddles. I circled back to where I had parked and looked everywhere. It was nowhere to be found. I left a crude note at the highway turnoff, kicked more dirt and went home.

I tried lost and found posts on Craigslist and local flyfishing forums, called fly shops and begged for them to keep an ear out. I even tried karma when a few days later I found a nice LL Bean flannel with a big bag of weed in the pocket, hoping that if I could get this flannel back to its owner, surely someone was trying to do the same for me. Nothing worked. I gifted the flannel to a friend and made some caramels out of the weed to help ease the pain. I can only hope that whoever did find that rod is putting it to good use and catching lots of fish with it. Maybe they're even missing a flannel.

Editors Note: Introducing the “Twelve From The Vault Series." Copi Vojta is a photographer and the photo editor at The Flyfish Journal and currently resides in Bellingham, WA. I first came across his photography while paging through the Drake Magazine on a road trip back in 2009 when he lived in Carbondale, CO. In a sea of fly fishing magazines that existed back then, Copi’s images were different and special – his photography stood out.

Later, Copi and I later crossed paths on the first leg of the infamous “Ride With Clyde” series that spanned from 2012-2019 published by the Drake. I rode shotgun while Copi shot images of the fuzzy green dice hanging from the rear-view mirror as we bumped our way through the Roaring Fork River valley.For 2021, Trouts has commissioned Copi to dig through his old hard drives and memory cards from the days he spent fishing here in Colorado. This is his first piece in a series of twelve that you’ll find monthly on our blog at troutsflyfishing.com.