Twelve from the Vault | “It Is Never This Specific” 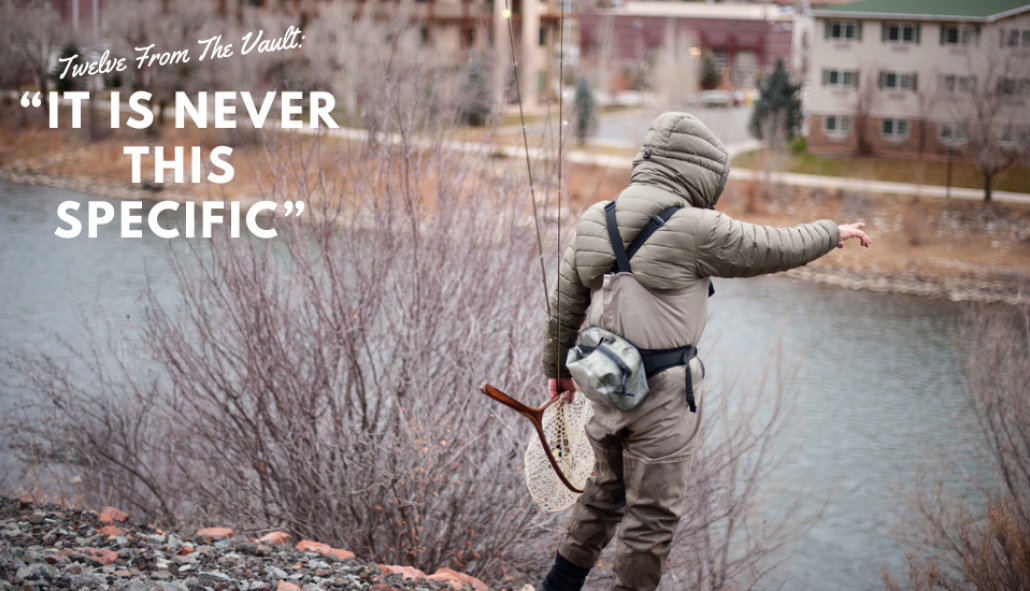 Editors Note: Introducing the “Twelve From The Vault Series”
Copi Vojta is a photographer and the photo editor at The Flyfish Journal and currently resides in Bellingham, WA. I first came across his photography while paging through the Drake Magazine on a road trip back in 2009 when he lived in Carbondale, CO. In a sea of fly fishing magazines that existed back then, Copi’s images were different and special – his photography stood out.

Later, Copi and I later crossed paths on the first leg of the infamous “Ride With Clyde” series that spanned from 2012-2019 published by the Drake. I rode shotgun while Copi shot images of the fuzzy green dice hanging from the rear-view mirror as we bumped our way through the Roaring Fork River valley.

For 2021, Trouts has commissioned Copi to dig through his old hard drives and memory cards from the days he spent fishing here in Colorado. This is his first piece in a series of twelve that you’ll find monthly on our blog at troutsflyfishing.com.

Twelve From The Vault: “It Is Never This Specific”
By copi vojta

“Looking downstream, river right, at the end of the long slow run underneath the bridge the water pours shallow over a gravel bar extending halfway into the river. A small channel still runs, even in January and if you walk quietly, following the gravel shelf down and across to where the two currents start to tangle, there is a deeper pit on the left, in the main channel that’ll go on for twenty or thirty feet and some softer water coming in from the side on your right, but I won’t trample through their house. There’s a bit of a lake, which the geese like, so I’m sure they’re okay with a little commotion, but either way, I like to keep it to a minimum. Even when I’m done I try not to splash. Depending on what you’re fishing, I’d either start here and swing or short strip a small streamer or turn around and walk the bank and wait till you see risers or if you’re into it a nymph rig. Be careful and make sure you have a good roll cast cause the bank is steep over your shoulder and it’s tough to get a good cast into the gut. It starts shallow on the bar, but drops off pretty quick, but they’re thick in there I know. It’s fast and deep enough right off your toes that you can’t wade too far in. I saw one fish hugging the edge and both rainbows I landed were in the steadier smooth current coming in from the side channel but that was three days ago. I doubt anyone’s been in there since. You won’t want to spend all day there but it’s nice for a couple hours.”