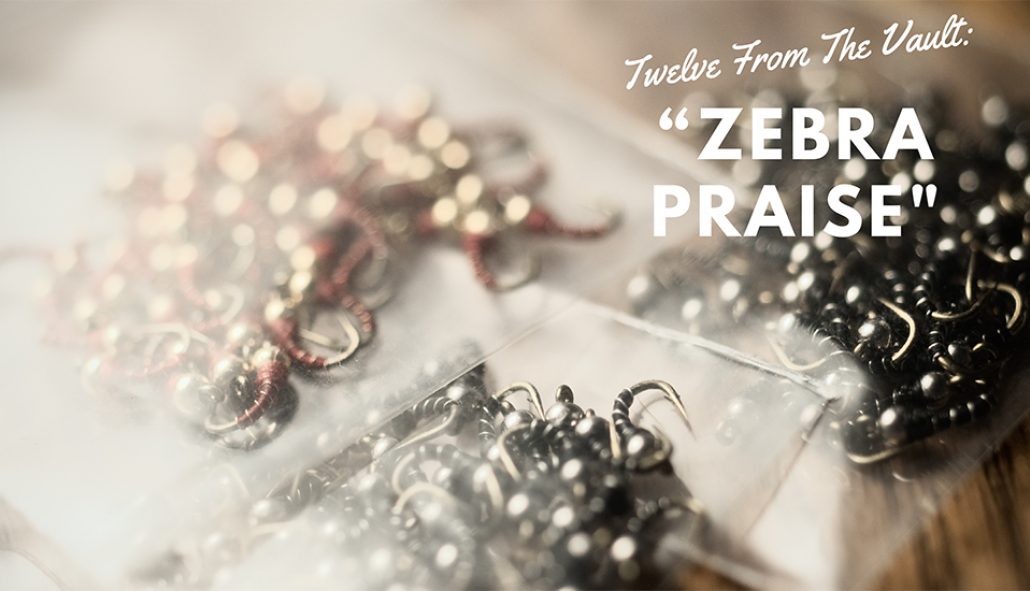 Twelve From The Vault: “Zebra Praise”
By copi vojta

I’m tying midges
Listening to Japanese hip hop
In somebody else’s mom’s basement
To pay off the tab from my day job
Working at a local fly shop
Red and black six-aught
Colored beads and wire
Ted Welling, you and your fly belong in the zoo

I learned to dead drift those patterns along the orange and red canyon runs of Lee’s Ferry. Yarn indicators doused in gink and stack mended for yards. While living in Marble Canyon, I used to try kick flips in the single wide, cast hook-less dries on a tip section of a fly rod towards the lizard that lived under the ice machine and dozed off behind the counter of Marble Canyon Outfitters (sorry Dave). Ted Welling helped to show me the ropes of the canyon, the fly shop, and his zebra midge pattern. He could tie twice as many per hour as me.

Eventually, I migrated upstream, to the runs in Colorado. Different canyons but the same water. The transition meant less kick flips and lizards but more dry flies and more zebra midges. Different fly shop, but the same pattern.

I haven’t fished six and seven x tied to size 18 zebra's in years, and you know what, I miss it.

Editors Note: Introducing the “Twelve From The Vault Series”Copi Vojta is a photographer and the photo editor at The Flyfish Journal and currently resides in Bellingham, WA. I first came across his photography while paging through the Drake Magazine on a road trip back in 2009 when he lived in Carbondale, CO. In a sea of fly fishing magazines that existed back then, Copi’s images were different and special – his photography stood out.

Later, Copi and I later crossed paths on the first leg of the infamous “Ride With Clyde” series that spanned from 2012-2019 published by the Drake. I rode shotgun while Copi shot images of the fuzzy green dice hanging from the rear-view mirror as we bumped our way through the Roaring Fork River valley.For 2021, Trouts has commissioned Copi to dig through his old hard drives and memory cards from the days he spent fishing here in Colorado. This is his first piece in a series of twelve that you’ll find monthly on our blog at troutsflyfishing.com.