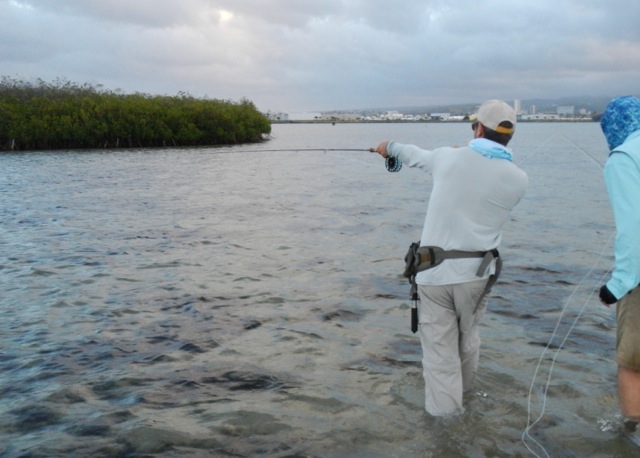 Sometimes the best lessons are the ones that sting the most.

Last year I was walking a flat with Captain Mike Hennessey just off the coast of Oahu. We weren't far from Waiki Ki Beach. This section of Hawaii has fairly extreme tidal shifts - when the water recedes the flats are barren and dry out in the sun. A few hours later... water three or four feet deep submerge the flats. It happens fast. The game plan was to find bonefish on the tidal rise. You could see them patrolling the deeper water, right on the edge of the large coral flat. When the water was high enough it permitted just enough room for the fish to scoot up onto the flat where they would begin foraging in the nooks and crannies of the coral and sand for shrimp and crabs.

The fishing was tough that day and I did not have a ton of great shots at fish. But the fish we did see... huge. These were the biggest bonefish I had ever seen. And the crazy thing... they were all big. I don't think I saw a fish that was smaller than six pounds and most looked to be pushing 8 or 10+.

As the sun began to set I knew our day on the water was coming to an end. We slowly walked the edge of the coral - it went from 10 inches of water that I was walking in to seemingly bottomless ocean just off the edge of the flat. I picked up a fish cruising in the deep water, he poked his nose over the edge... once... twice.... finally he pushed his way into the skinny water not 25 feet in front of me. I made the short cast, my fly quickly sank to the bottom. The bonefish turned and moved closer to it making an aggressive investigation – just the type of body language you want to see. Just before the fish ate my fly I crouched down a bit to ensure he couldn't see me, I was anticipating the take at any moment. 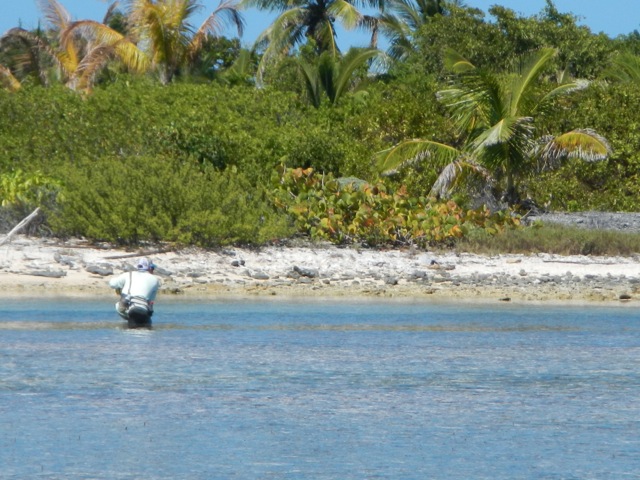 Then... right at the last second - his nose inches from my fly - he turned and bolted away.

Rejection. From a 10 lb bonefish. It stings.

"None of that. That last little shimmy-shimmy move you made - whatever that was," he said... good-natured but also a bit frustrated. "Those fish can pick up on the vibration and sound of grinding coral and sand under your boots. Right at the last second you made some kind of shift and turned a little bit and crouched down. That fish knew all about it. It wasn't your tippet or your fly or your cast. It was all you man..."

Ouch. The truth hurts. And on a saltwater trip thousands of miles from home, the truth hurts that much more. As in most things, it is all about the little details when you are out on the water.

Here is a great article that has great tips about wading flats from Deneki Outdoors that I just shared with our clients who will be heading down to the Andros South Lodge in March of 2014. There is still one spot open at the lodge that week. Give us a call at the shop if you have any questions - it would be great to have you join our crew of anglers on an amazing saltwater adventure - 303.733.1434. And if you have a trip on the books, stop down to the shop with your gear. We’ll make sure you are tuned up and ready to go.