Waiting for Steelhead: Trout’s BC Trip brings MG some clarity

Steelhead fishing is tough for several reasons. First, there just aren’t that many fish in the river, and when they do arrive from the sea their goal is spawning, not feeding. Spey casting isn’t easy either – even a proficient single-hand roll caster is ill-prepared for what’s in store with setting, sweeping, let alone actually rigging a two-handed rod. Lastly, the conditions can be taxing; it rains a lot in steelhead climes, so you often find yourself running from the downpours, hustling to seek out runs with decent clarity.

Of course, a lot of what I think is difficult about steelhead fishing comes from bias; living in tailwater-ville, with it’s annual stockings and consistent flows, can make one “lazy”. Having to analyze the water, and figure out what shooting head and sink tip to assemble can be Latin 601 to the Colorado fly angler.

Fishing the Chilliwack/Vedder river, a tributary of the Fraser in Southwestern British Columbia not known for its easy pickins’, particularly in the late winter, meant choosing the right guide service. April Vokey (yea, that April), and her colleague Greg Wolf, having been fishing the area since they were knee high to grasshoppers, dispensed such an extraordinary volume of their steelheading knowledge that it will take months to absorb all the notes. Rigging started it all, with analysis of the sticks we chose for the trip.

I fished two rigs while in BC. The first, and the one which I bagged “my fish” on, was a Scott T3H 1288/4 – that’s a twelve-foot eight-inch eight-weight – and the reel was an Abel Spey, colored in slate. On the advice of Andrew Bennett of Deneki Outdoors, I loaded my reel with enough backing to look safe (and fill the small arbor), then attached 150 or so feet of 40-pound Trilene Big Game mono as a running line. When I got out the first morning, the rod, handling an Airflo Skagit Compact 540 and 12 ½ feet of T-12, didn’t seem to want to load. Maybe it was just the neophyte caster, but Greg Wolf, after casting the rod a few times himself, suggested I bump the head up to 570 grains; after that all was right with the world. Scott Fly Rods suggested 560 grains, so they weren’t far from the truth.

The other rod I fished, ostensibly from day 2 through 4, was a classic Scott ARC 1196/4 – an eleven-foot nine-inch six-weight. Mounted on it was an Abel Switch, coated in Skull and Crossbones print (and quite badass if you ask the owner). Rigged the same way as the Spey reel, the rod loaded fine with a 420 Skagit Compact and either the 10 foot or 12.5 foot Light Mow Tips, and by the last day I felt like I could probably drop the head by 30 grains and still have fun (and turn over the flies I was casting, with the exception of the weighted one April handed me mid-afternoon).

I have been told to retire from winter steelhead fishing, having caught one fish described by many as a pride-enducing specimen. But, after throwing streamers with obsession to trout, I have learned that putting in the hours can and will eventually produce results. I find steelhead fishing not dissimilar to the aforementioned approach, but have, since this experience, developed a fondness for two-handed play.

Spey-style fishing means embracing patience. However, the casting style associated with the technique is so pleasurable to perform that I often found myself finishing a swing up early just for the sake of casting again. There was never a moment of boredom. Success was not measured just by the token fish, which in the conditions previously described cannot under any circumstances be taken as a harbinger of the next, but by tight loops, and the feel of loading a rod over twelve feet long such that the cork torques from the energy about to be released. 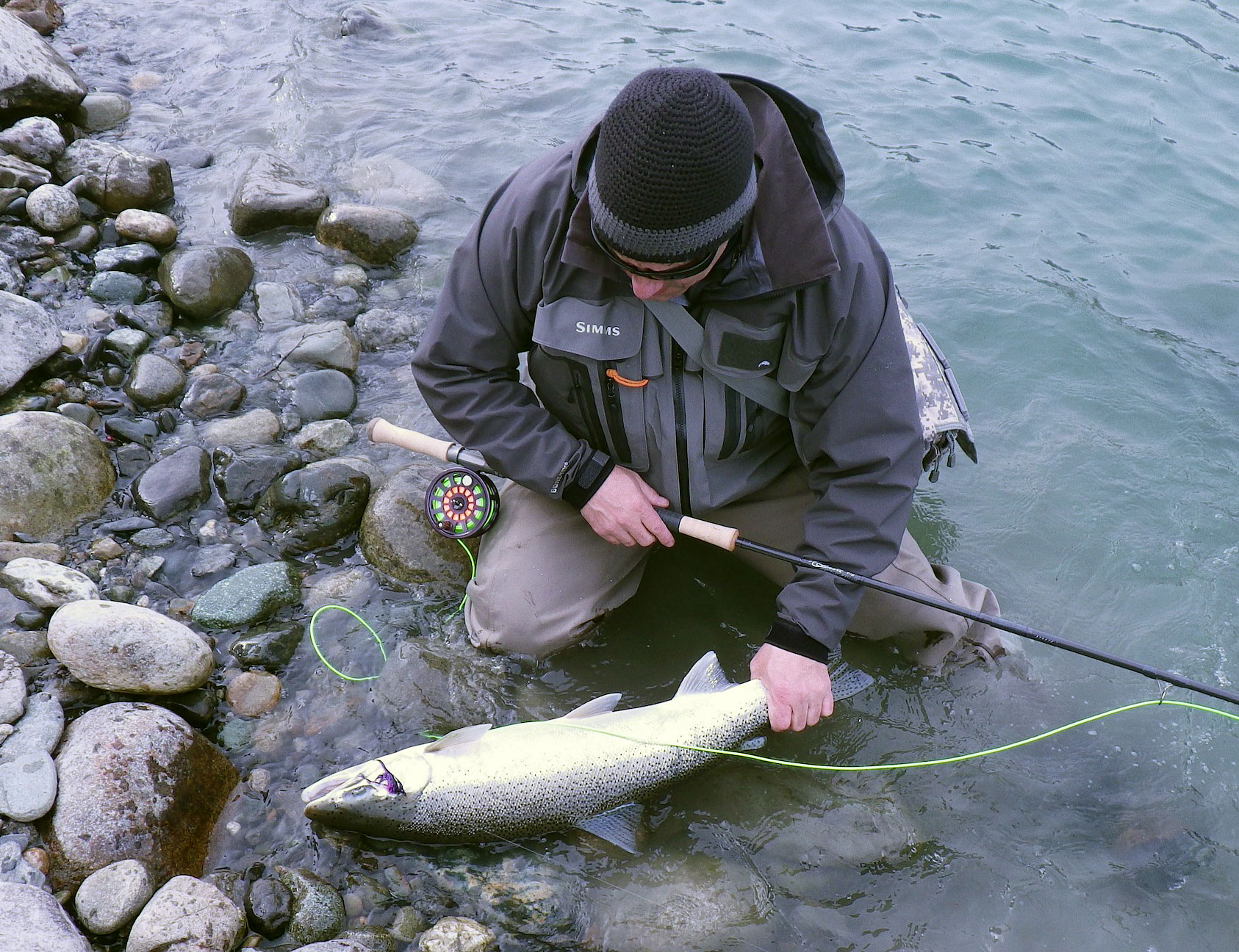 I might have put another notch in my butt-section, but I have also discovered something much more worthwhile: embracing timeless tradition born far way, rejuvenating my interest in the technical intricacies of fly-fishing, chucking flies 100 feet with nary an ounce of effort.

And catching a fish that has traveled thousands of miles, at the drop of a winter’s sun, to generate progeny for future fun.