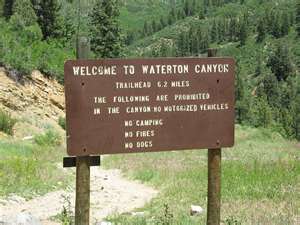 On March 1, Waterton Canyon opened to the public for the first time since July 2010 (click here to learn more about the reasoning behind this closure). While this was a highly anticipated event for the Denver angling community, high expectations of epic fishing were quickly deminished to tales of no fish, poor conditions and speculation that Waterton Canyon was now void of aquatic life. By Monday morning, we were fielding numerous phone calls and emails in the shop from customers concerned over the state of this fishery. We conducted interviews with anglers who had fished Waterton over the weekend, and every report we received was earily similar. "Out of about 30 other anglers we spoke to out on the water, I would say about 75% of them did not even hook up" wrote one angler. "Fishing was bad. We didn't catch or see any fish while there. Tried all kinds of nymphs and soft hackles. The bottom was all rock and gravel, only snags were dead branches. We didn't see any dead fish but no live ones either" was the comment from another. A quick search of the internet produced even more evidence that there was trouble brewing up in Waterton, with report after report of poor fishing, very few fish caught, and many anglers looking for answers.

Over the course of the week, we made numerous phone calls to officials at Denver Water, the Division of Wildlife, and the State Parks department, but none of our inquiries were ever answered. Things were starting to seem like there was a major issue developing, as silence can many time be indicative of a larger problem. It wasn't until today that an official statement was made by a Colorado Parks and Wildlife official on FishExplorer.com. Here is their statement:

"Based on some reports of extremely poor fishing over the weekend, Colorado Parks and Wildlife aquatic biologists took a trip up to shock Waterton on Tuesday. The biologist was able to find good numbers of brown trout in all age classes. At this point, Colorado Parks and Wildlife believes that the low flows and extremely clear water conditions are combining with the available ice cover and lack of activity to make for skittish fish with lots of hiding places. We believe that when the spring flows arrive, we'll see the fishing return to normal in that area."

Personally I find it hard to believe that the number of anglers that visited Waterton over the opening weekend all had poor experiences due to low and clear water. Regardless, I hope that the proper state and government agencies due what ever is necessary to ensure that this resource remains viable. If you do happen to venture into Waterton Canyon over the next few months, please give the shop a call or shoot us an email and let us know how it was. We will be sure and let all of our customers know of any future developments on this issue.