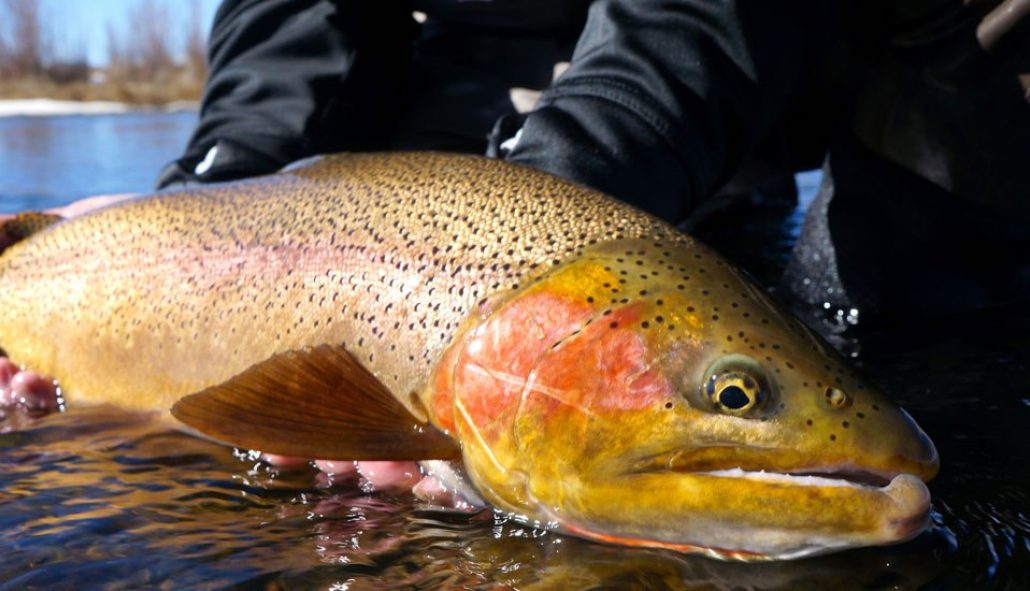 The one where they were giving customers free food if they called their Mom on the phone and said ‘I love you’ (or performed a similar act of kindness)? Well, let’s just say they’re really doing that…at least at the McDonald’s in Woodland Park, Colorado that is. Common courtesy with fishing -at least in my group of fishing counterparts- is that if you drive, you’re not paying for breakfast/lunch that day. That said, as I attempted to hand over my debit card for a $15.71 swipe to pick up breakfast for driver du jour, Lee Molvie and myself, the manager intervened, delivering a message that if we each told the other something we liked about each other, our meal would be free. (I’ll spare you the details, but let’s just say one of us thinks he is “out-bearded” by the other, while “out-bearded” has a good sense of humor, according to “bearded”). One of our other counterparts that day, Blake, also received free breakfast for simply turning around and giving me a firm handshake. Either way, between the three of us we were several thousand calories in the black and a few dollars richer than we had anticipated being upon exiting that fine establishment. West bound towards the Dream Stream we continued, all in agreement that it was going to be a good day after such a pleasant Mickey D experience.

Checking the weather always seems to be an important component to planning a day’s fishing, particularly this time of year. Given the warm-ish forecast for Saturday, we decided to break out of the usual Deckers/Cheesman routine. Options on location for the day were discussed and the idea of heading to South Park was brought up. Even with flows at 50cfs, how often do you get 50 degrees and sun in February at the Dream? Pair that with the fact it had been several months since any of us had ventured to this stretch of the S. Platte and the decision on where to head became an easy one.

We anticipated the fish to be spooky given the flows, and crossed our fingers the wind would be kind to us as we rigged rods and wadered up. Dave from the shop was also along for the day and his dog Blue wasted no time getting into the usual routine of finding a stick for us to throw.

Descending upon the river, she sure was low. A few fish were quickly spotted at location number one and were landed on consecutive casts. Not a bad way to start the day. I’d heard several reports earlier in the week of a very large number of 12-14” Rainbows being in the river—so many in some spots that they could become quite annoying once you found a big fish to target. I can say with certainty, this is very true. At one point during the day, Lee was sight fishing to a 23” Cutthroat (pictured above) and I’m pretty sure he might have caught a half dozen of these little silver bullets (as I call them) in the process.

I’m not going to lie, Saturday wasn’t easy. The wind wasted no time picking up to a sustained 20mph, with gusts to twice that I’m pretty sure. Sight fishing was very tough due to the wind and the fish were definitely spooky with the low flows. Some historically proven ‘fishy’ runs couldn’t even be fished because the wind wouldn’t allow you to get a drift. Either way, as is usually the case this time of year, persistence was the key to success and we were fortunate enough to still bring several very nice fish to hand throughout the day, along with countless other smaller Rainbows and Browns. As we headed back to the vehicles under a setting sun, visions of chips and salsa and margaritas on the rocks back in Colorado Springs added a little extra hop to all of our steps. While conditions are still a little off at the Dream Stream right now, the fact remains there are still fish to be caught. As we broke down rods and stuffed wet waders and boots into the backs of vehicles, we were already talking about coming back for more at the next possible opportunity.

(Oh, and as a side note, you may remember from my last weekend report referring to Dave's dog as the best fishing dog ever. Please take a moment to note in the picture below of Dave casting, how concerned Blue is with tight loops that he stands on his back feet to watch every backcast Dave makes....you've really just got to see it in person) 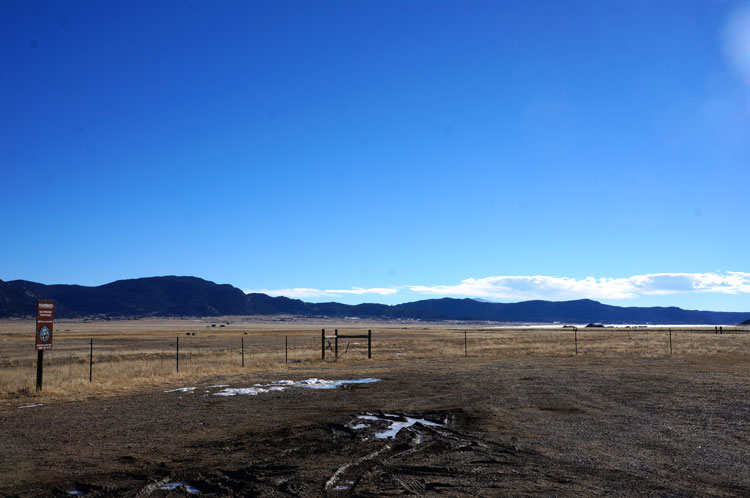 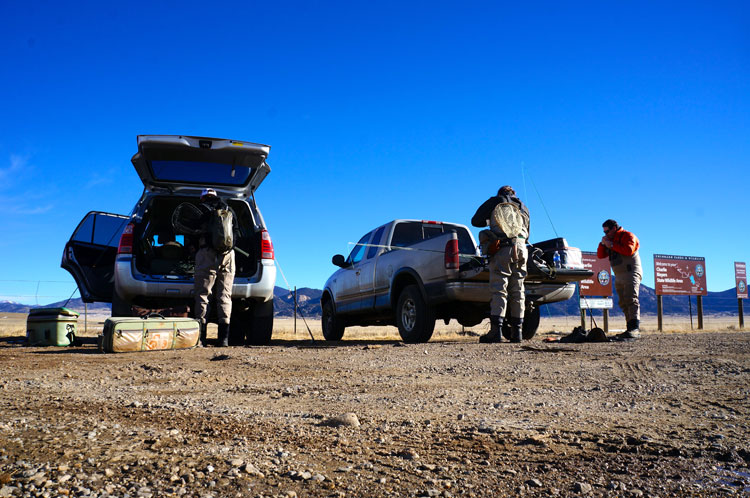 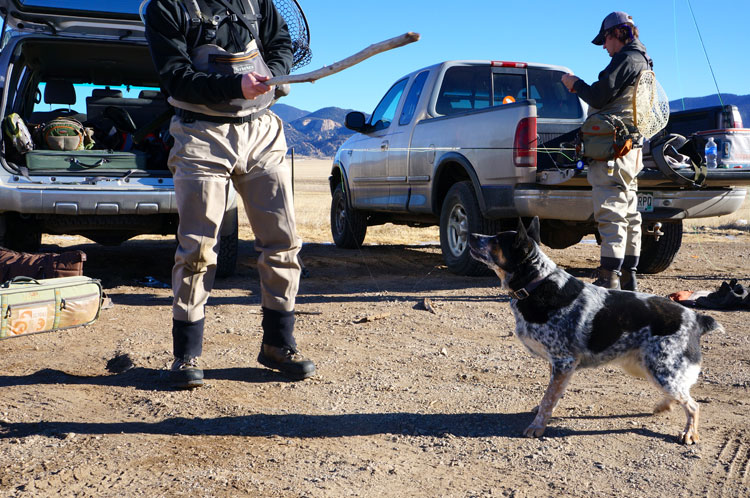 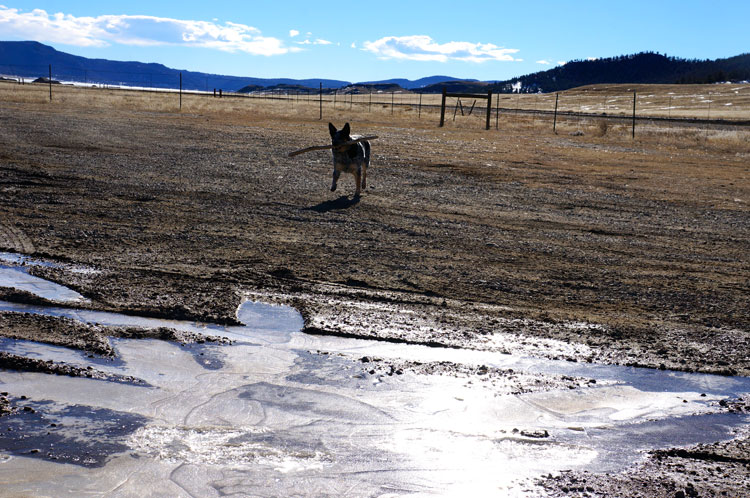 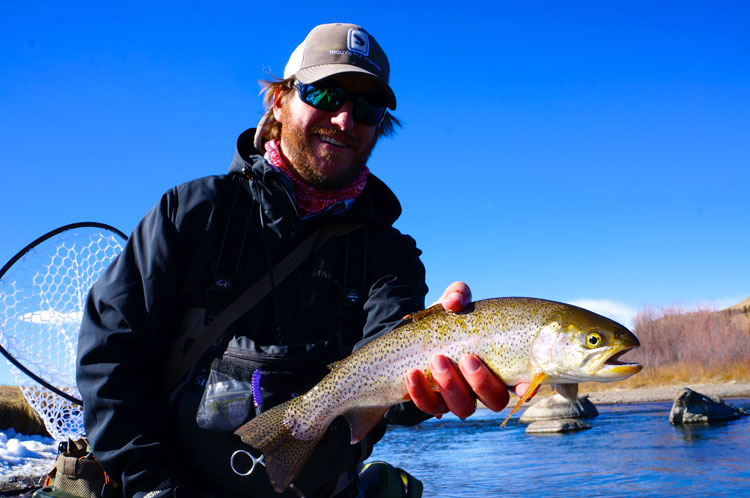 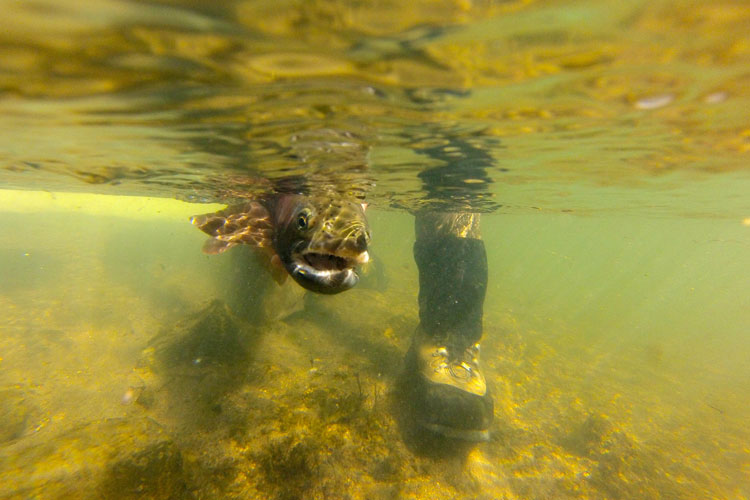 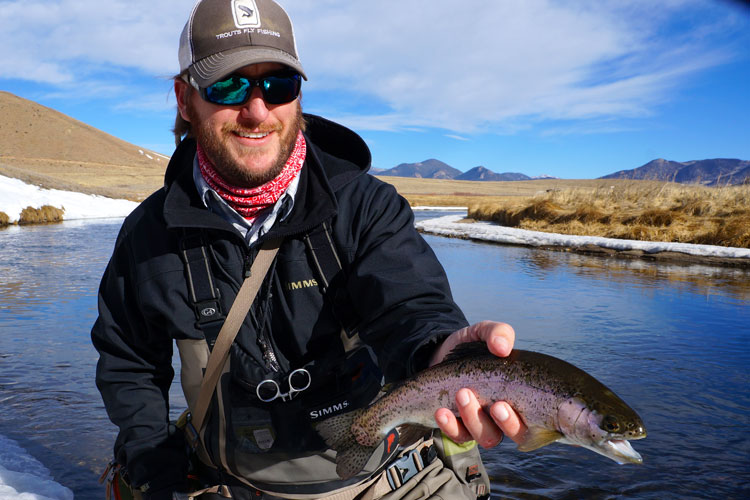 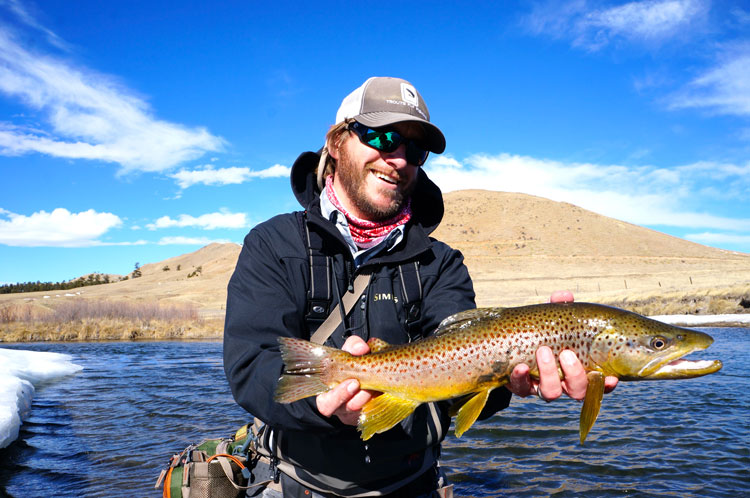 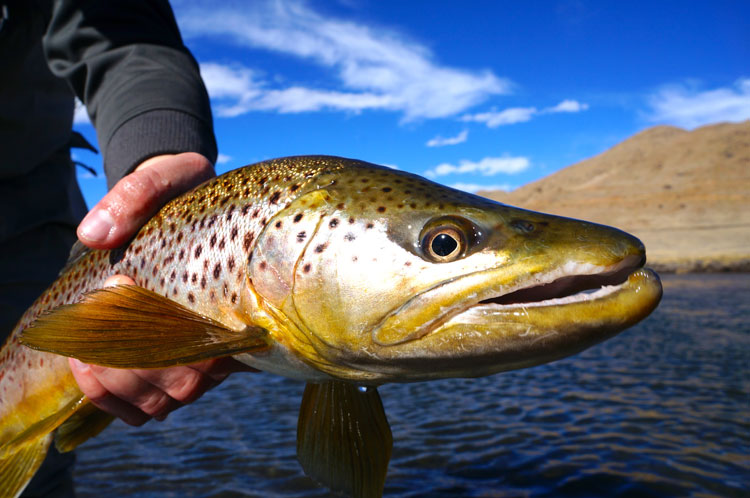 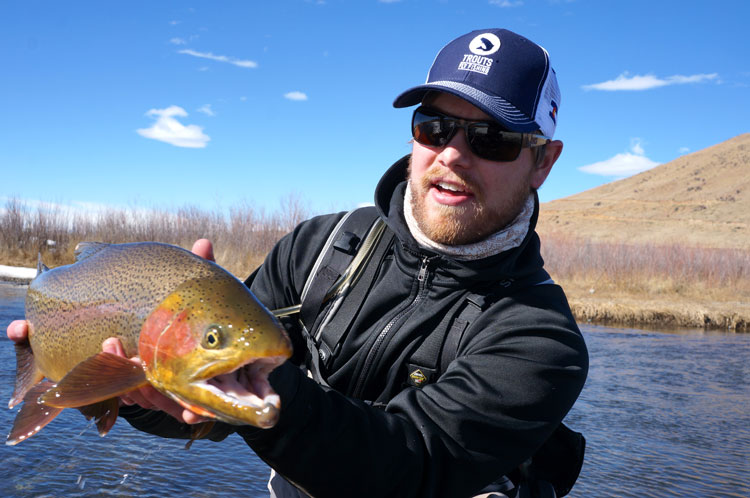 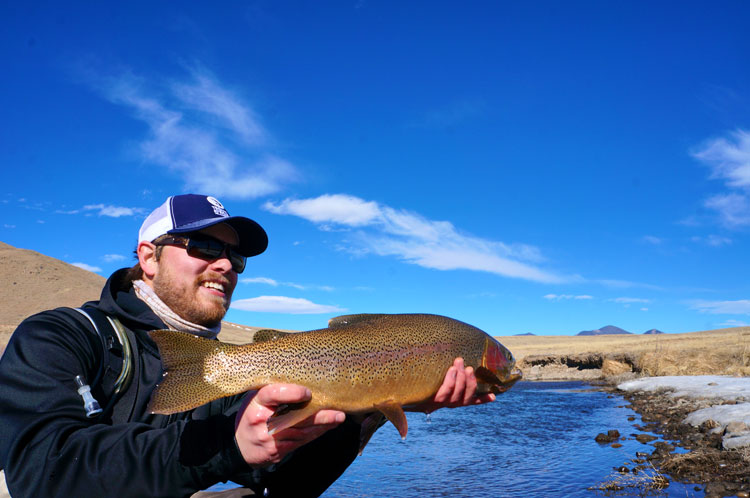 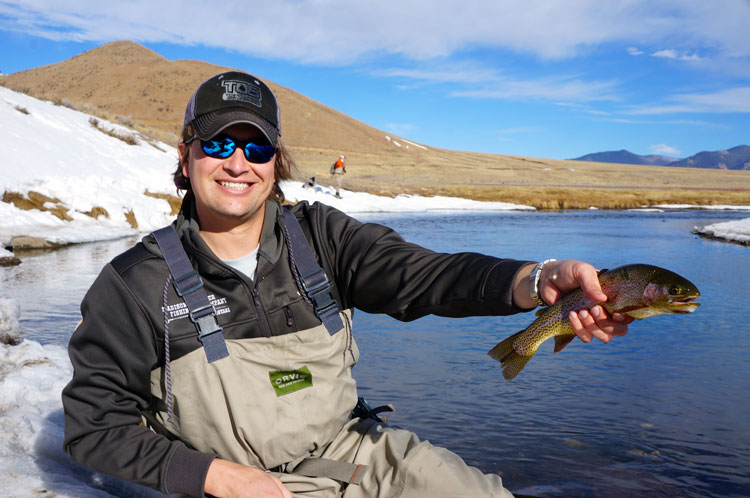 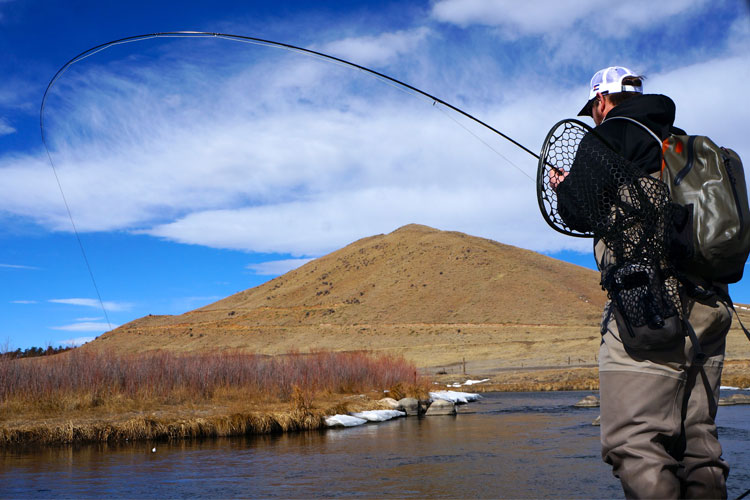 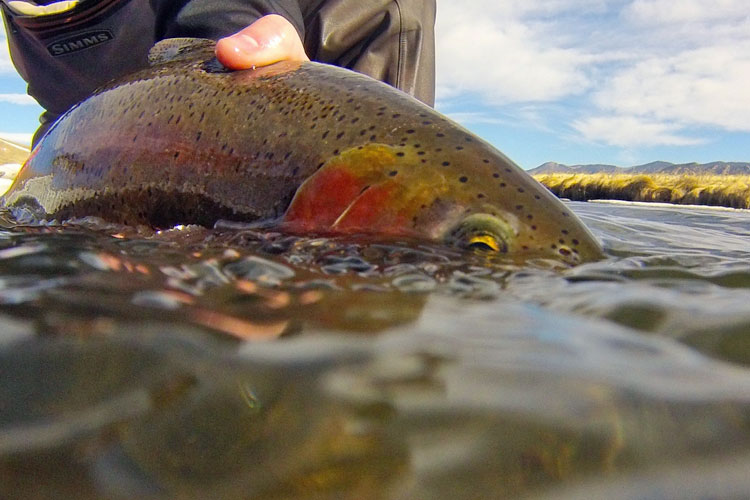 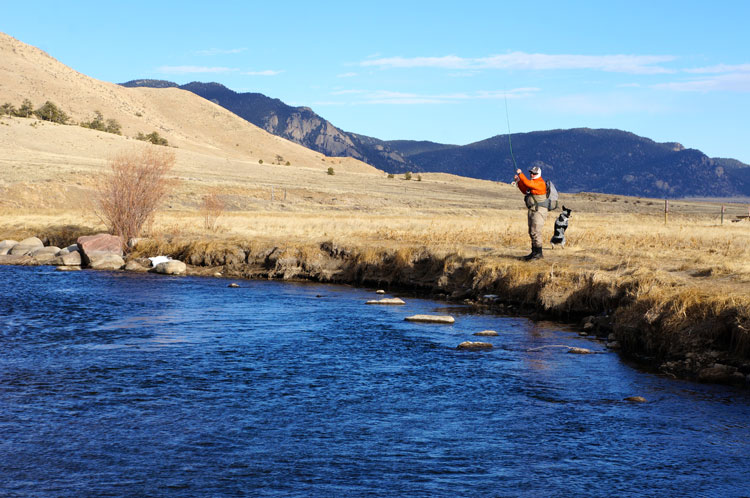 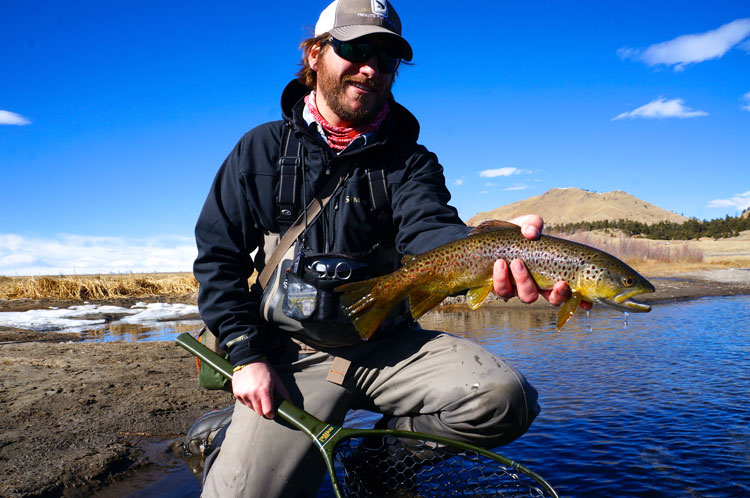