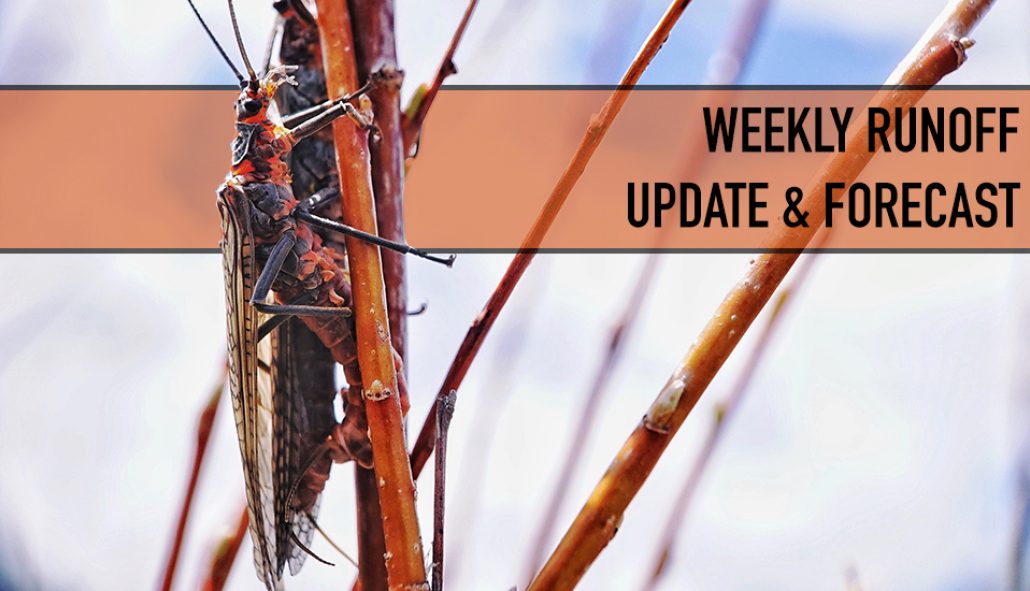 Here is the second installment of the 2017 Weekly Runoff Update & Forecast. In case you didn’t tune in last week, this is the weekly outlook on the state of annual runoff here in Colorado. So what’s the current forecast? Well in short, the month of May is now over and the brunt of annual runoff still hasn’t arrived.

I have to be honest, I’ve lived in Colorado my entire life and I can’t remember a spring season as prolonged as we’ve seen this year. Frisco Manager Chris Fildes and I fished the Colorado River on Tuesday, and the conditions were nothing short of lights out. Flows were hovering a little over 2,000 cfs, clarity was over a foot, and the fish were eating just about everything we threw at them. So while the fishing has been stellar for a majority of the spring, the realities of runoff are starting to peak their ugly head. So the question on all of our minds is, “when is runoff going to begin”?

The USDA released its most current Colorado SNOTEL SWE (Snow Water Equivalent) Map today, and the data is nothing short of astounding. The following is the SNOTEL Map dated May 11, 2017.

Now compare this data to the most current SNOTEL map dated June 1, 2017.

Statewide our snowpack nearly doubled in the second half of May, and certain river basins rose as levels far greater. And the reality of the situation is that we are now sitting on substantially more snow than we ever had historically. So, while the whitewater community is rejoicing and waiting in anticipation for the inevitable melt, how do we as anglers interpret this situation?

First and foremost, we should all be thankful that we have this abundance of water sitting in limbo. Reservoir and river levels are going to be healthy during the remainder of 2017, and more water is certainly better than not enough water. Currently, our snowpack is sitting at roughly 11,000 and above. The following picture is of Loveland Ski Area taken from the north side of Loveland Pass on 5/31/17. At an elevation of 10,800’, the current snowline starts at or just above the ski area base. What this translates to is that statewide we have roughly 3,000’+ of snowpack waiting to come down, with certain river basins currently holding snowpack depths exceeding 10’. The following is a picture dated May 26th showing the current snowpack along Trail Ridge Road in Rocky Mountain Nationals Park. 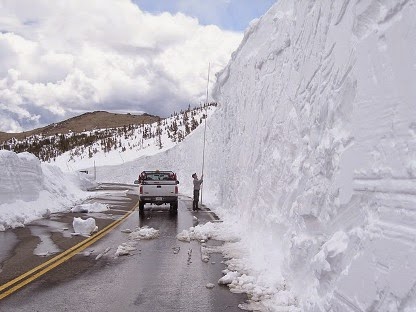 This area measured 14’ in depth, showing just how much snow has been left waiting at our state's higher elevations. So back to the initial question, “when is runoff going to begin”?

For snow to melt, we need hot temperatures, the likes of which we have not seen very much of in the high country of Colorado so far this spring/summer. But it’s only a matter of time before we get a heat wave, and when it comes so too will runoff. When that is going to be is any one’s guess, and I for one am not going to trust the forecast of our local news stations. What we all need to be looking for is temperatures in our mountain valleys of 70 degrees or more, which translates to 60 degree temps at higher elevations, and in turn melting snow. At this time I foresee the following three runoff scenerios, to which we’ve included our take on the fishing pro’s and con’s.

1. Fast and Furious: Hot temperatures and afternoon storms will create a perfect storm of mountain snowmelt. High daytime temperatures will begin the melt, and the afternoon rain will help expedite the runoff.

Pros: The snow is going to come down fast, all while providing our rivers an annual flush to help promote buglife and an overall healthy fishery. You’ll have transition to tailwaters and stillwater during the interim, but these fisheries should be thriving during this time.

Cons: This scenario runs the risk of flooding and extreme river flows. Die hard freestone river anglers and float fisherman will be left on the sidelines.

2. Slow and Steady: Below average temperatures and continued moisture will slow the melting process, producing a slow and steady melt of our snowpack. Water will come down in varying volumes, but won’t fluctuate enough to create discoloration of our famed fisheries. Flows will be higher than average, but clarity will offer plenty of angling options.

Pros: We will have more available fishing during our runoff, and the increased flows are a benefit to our resident trout populations. Our rivers will also receive a necessary and welcomed prolonged “flush” to help move sediment and produce better insect habitat.

3. 50/50: We’ll receive a mix of mix of weather throughout June and July, and will encounter periods of high and stabilizing flows. Either of which will come and go, and our melt will be as erratic as this past winter season. Fishing will remain productive, you’ll just need to know where to look. River flows and forecasted weather will be as important as the nightly news, but diligence and planning will be rewarded.

Pros: It will be like a normal runoff cycle, just two months behind schedule. We’ll get prolonged floating opportunities on river’s like the Eagle River, and inevitable flushing flows on our favorite tailwaters. High country fishing will open in due time, and the fish will be undoubtedly famished and looking for a solid meal.

Cons: Conditions are going to change daily, so if you’re not planning or checking with your local fly shop you may find less than ideal fishing.

In regards to recent conditions, flows on many of our favorite freestones remained relatively steady over the weekend and this translated to some lights out fishing on the upper and middle sections of the Colorado, Arkansas, Eagle and Roaring Fork Rivers, including the much anticipated salmonfly hatch on the middle Colorado. Flows on many of our tailwaters received bumps in flows leading into the weekend. These bumps have the tailwater trout focused on some bigger bugs and that has led to some fantastic fishing on the South Platte and Blue River.

To close, let’s discuss what to expect in terms of runoff during the first week of June. Remember those mountain valley temperatures in the 70s that we were looking for to kick runoff off. If we are to trust weather.com/weatherunderground.com/local news and the like, those temps will be hitting our high mountain towns throughout the week. Combine those temps with forecasted rain in the mountain valleys, and daily lows in the low to mid 40s, it is our expectation that runoff in some form will begin within the week.

With that in mind, our freestones should start to see a little more color with rises in flows, so focusing on throwing big bugs into soft, boundary water should yield success. The quality of fishing on freestones will depend on whether each river experiences Type 1, Type 2, or Type 3 runoff described above. So, pay attention to those hydrographs going into your next day on the water. With regards to our tailwaters, any bump in flow should be considered encouraging; it’s only a matter of time before the South Platte up and down the drainage sees increased flows and that means good things for your fishing!