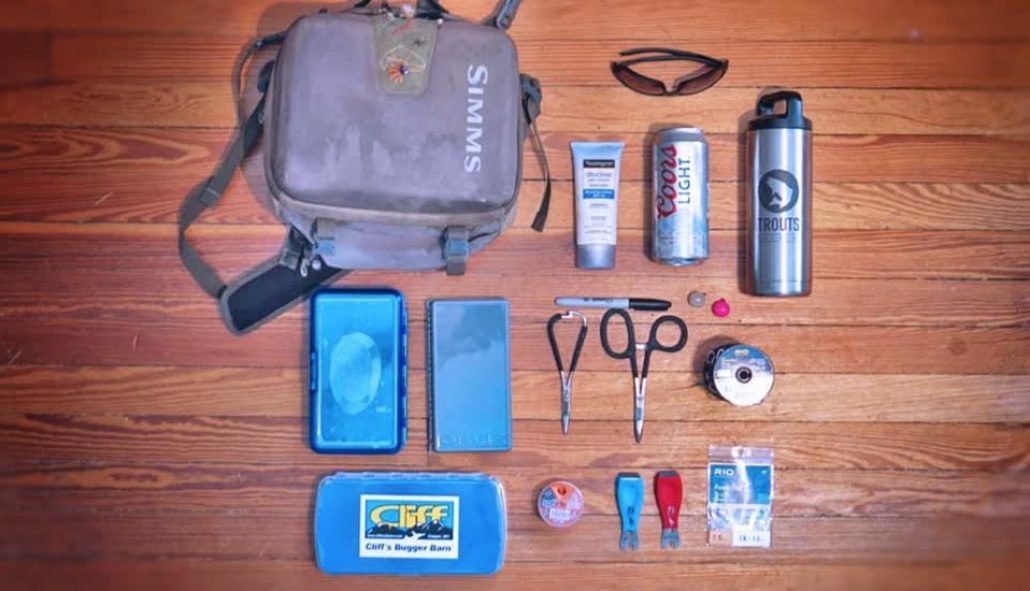 People in the shop frequently ask what they need to carry on a day to day basis. As most anglers can attest, “what’s in your pack” varies per person. From the extremist who has everything you could ever need, down to the minimalist who carries just enough to survive a day on the water. If you and your fishing buddies are like us, each person plays a role in making sure everyone has what they need while on the water. In a two part series Chris and I are going to give you some insight on what we carry and some reasoning behind it.

I certainly qualify more as a minimalist than most. As Chris can attest, I’m the guy who frequently starts the rigging up process with the question, “Hey man, you got an extra leader?” While I have tried to improve on being more prepared, it has become accepted that if it’s not a leader it will be something else. My pack of choice is the Simms Waypoint Large Hip-pack and while I may forget some things there are certain tools I make sure to have. Must haves for me are as follow:

- a good pair of Forceps,

- multiple pairs of nippers, the Rising Big Nippas being my favorite,

- A black sharpie. I use the sharpie to add on the water changes to fly patterns, rather than being equipped with multiple variations.

Now let’s get to my fly selections, I’m very particular in choosing a method of how I want to fish that day and sticking to it. With that said I generally have multiple boxes at the truck, but only carry one with me while I’m on the water. This has its positives and negatives. The positives being, it has taught me to fish water very thoroughly, forced myself to find fish when I only brought the streamer or dry fly box. It has really helped me learn to read water and appreciate pocket water. The negatives being sometimes I don’t catch as many fish as I should.

With the limited amount of gear in my pack some of you may wonder why I carry such a large pack. The answer to that is, I’m generally the beer guy. I have systematically found I can carry all my fishing gear, my raincoat or extra layer, dog leash, snacks and exactly eight beers. While Chris and other fishing buddies may occasionally provide me with terminal tackle, they appreciate me coming through with a warm beer on the riverside. After all we are a team on the water and all play a role in each others success.

I hope this provides some good insight as to how I approach a day on the river. Again, it all really boils down to personal preference on what is important. Keeping it simple has been my approach for better or worse.

Check back in next week to hear Chris' take on “What’s in Your Pack.”