What Happens To A Trout During Winter? 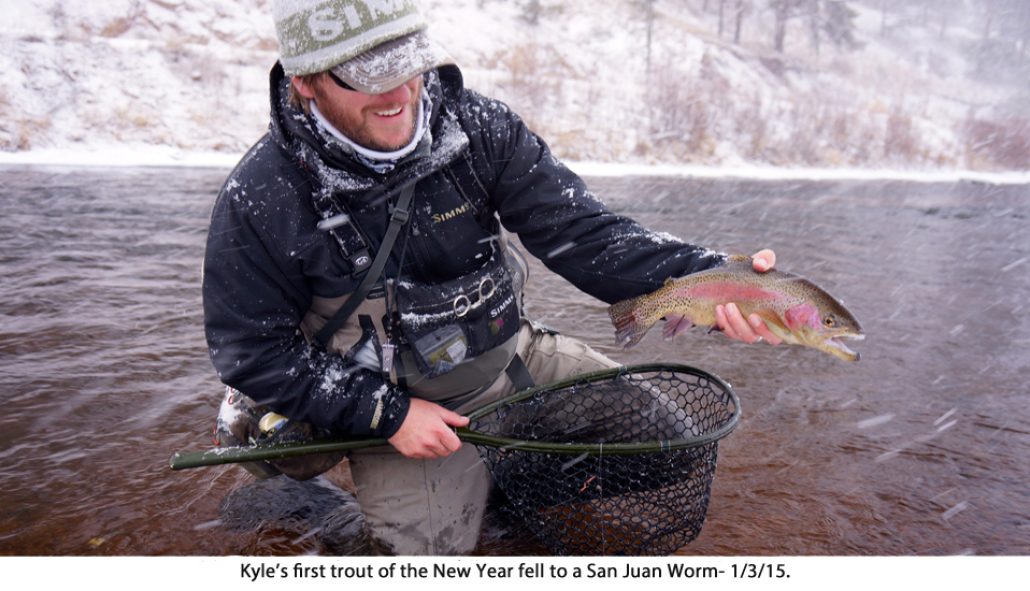 The topic of tearing down dams has been somewhat of a buzz of over the past few years- with many successful campaigns already being waged and won. Whether you love them or hate them (watch the documentary Damnation and you'll likely shift at least a little allegiance to the latter, particularly if you live on a river with runs of anadromous fish) they do create one terrific reality for us here on the Front Range of Colorado- Tailwaters. 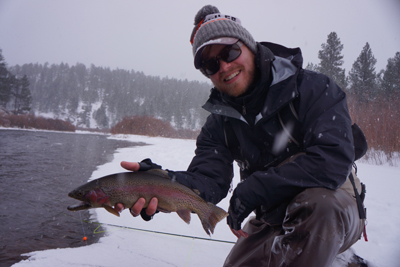 To get anyone up to speed- particularly the newer anglers reading this- a Tailwater is the portion of a river that lies directly below a dam. These stretches of rivers typically create phenomenal trout habitat due to the (usually) stable flows and more importantly, water temperatures provided. I've heard it said that the average temperature of water coming from a bottom release dam is usually right about 42 degrees. During the coldest parts of the year, the water temp can certainly drop down into the 30's and ice over the further downstream you get, however the first few miles below a dam typically make it through the winter sans ice. This scenario is all it takes to create the situation described at the beginning of all this- year round trout fishing.

When it comes to fishing for trout during the winter, whether you're on a tailwater or freestone river (undamned river, or stretches WAY downriver of the dam) that allows for fishing, understanding what happens to a trout during the colder months of the year is the first key to success. Afterall, having this firm understanding- which thankfully isn't complicated- will be the foundation for your decisions on fly selction, presentation, and fishing locations.

One of the great things about fly-fishing is that there are always going to be a million different opinions on various aspects of this sport. One of my personal opinions -that I firmly believe- is that you truly can make fly-fishing as simple or complicated as you want, and likely still consistantly put fish in the net. I prefer to keep things simple.

So with the goal of simplicity in mind, I've summed up a winter trout by 4 main characteristics.

1. Metabolism slows- A trout is a cold blooded animal and as such, they're metabolism is directly effected by the water temperature. Colder water=slower metabolism=won't be as hungry throughout the day. Use this for a confidence arrow in your quiver to avoid overthinking fly selection (which we'll discuss in point 2). Depending on conditions that day it's likely not your flies that are the issue, it's the fact that you simply need to keep covering water to find some active fish. Focus on the sunnier/warmer parts of the day for consistent feeding action. Sometimes all it takes is for the water to warm up a degree or two during the midday hours for the trout to get active.

2. Food sources decrease- I had some really fun days guiding this summer where we threw nothing but dry flies from start to finish in various Blue Wing Olive, Pale Morning Dun, Caddis and Yellow Sally imitations- all with considerable success. All you had to do was match your dry fly to the bug-du-hour that was hatching and you were into fish. Throw that rainbows and unicorns scenario (i.e. a perfect world) out the window for the next many months. Remember this- you are only going to encounter two possible hatches during the winter: 1) Midges 2) Blue Wing Olives. These micro food sources don't pack a ton of calories, but can still get the trout pretty eager to feed during even an average hatch. The fish don't have the luxury of daily, prolific hatches right now so they're going to take advantage of what they can get more often than not. However, even with less of a need to feed during the winter, Midges and Baetis alone aren't likely going to be all it takes to keep a tail kicking back and forth. A little more protein here and there is going to be much appreciated and that's where worms, eggs and stoneflies come into play. For worms and eggs, these are two great winter food sources and provide a lazy trout exactly what it needs- a "non-escaping food source". i.e. that fish isn't going to have to expend considerable energy to take in a calorie packed snack. Eggs and worms provide many more calories per meal than a midge or baetis does, and should go-to patterns for the wintering angler. While stoneflies are without question a summer hatching insect, their nymphs are still in the water during the winter and you can bet a trout is going to relish in the opportunity to get another easy, calorie filled meal during these entomologically leaner months. Aside from Midges/Blue Wings/Eggs/Worms/Stoneflies, there's really only two other fly patterns you might consider carrying, particularly if you're fishing directly below a dam- Mysis Shrimp and Scuds/Sow Bugs. These are very tailwater specific food sources (and year round food sources I'll add) that the trout can really home in on. Depending on where exactly you're fishing, Mysis Shrimp and Scuds/Sowbugs may be the prime food source for trout, or they may not even be in the system at all. Both these food sources can be pretty river specific and a research on the internet will quickly tell you whether or not to bring some along. In summary, fly selection is currently in it's simplest state of being right now- my suggestion from now through March is to fish a stonefly/worm/egg, trailed by a BWO or midge. Doesn't get much easier than that.

3. Real estate decreases- During winter, rivers are typically at their lowest levels of the years. Less water in the river=less water for the fish to spread out in=the fish will be more concentrated. Case in point, once you've found one, you've likely just found a bunch. If we think back to Point 1 regarding metabolism, where then would it make sense for a winter trout to take up shop? Most all of you probably know the answer to this. Think Slow and Deep. Fish will pack into the deep, slow moving pools during winter where they can live out the colder months expending as little energy as possible. If you're heading to a new river during winter for the first time, these are the areas you should focus on. Skip over those beautiful, 100 yard riffle runs that you'd give your left pinky to drift a hopper pattern through in the summer. Don't overthink fish positioning in the winter. They want the easiest water possible to hold in, and that's always going to be the slow and deep stuff. *side note: I will add that riffles (and shallower areas in general) adjacent to deep zones are where trout will often move during their peak feeding times, which will almost always coincide with a few bugs hatching. They can easily pull up out of the deep water, hit the shallows to take advantage of the hatching bugs, and then drift back off to the depths to resume waiting for spring.

4. Feeding zone shrinks- This final point is what really ties this whole winter trout discussion together. Now that we know the trout's metabolism has significantly slowed, that it has less food available/exaclty what flies to fish, and that it's going to be sitting somewhere in or around deep, slow water, remembering this last piece of advice is all it should take to keep a bend in your rod for the next few months. While tailwater trout in particular can be finicky feeders year round, the best analogy I can come up with for a trouts feeding zone in winter is to think of a shoebox. (if you keep a regular eye on this blog you might have heard this analogy before). Put a trout in a shoebox and what's going to happen? It's not going to have a lot of room on either side is it? If my flies aren't in this 'shoebox zone' of a trouts face during the winter, my expectations of that fish eating drastically drop. Some days it seems the flies literally have to drift right into the fish's mouth for them to eat. How this relates to your fishing then is to remind you to be very thorough when picking apart a run. If you feel confident an area is holding fish, making repeated driftts through the zone may be what it takes to elicit a strike.

While winter time trout fishing may not be everyone's cup of tea, it can nonetheless still be a very productive way to extend your fishing season. Bundle up, fish with confidence and have fun out there!

I promise cold hands, frozen guides and a couple trout on balmy Saturday in January is still much better for the soul than pacing around the house with your second bourbon drink by noon, cursing the I-70 ski traffic and waiting for spring to get here.