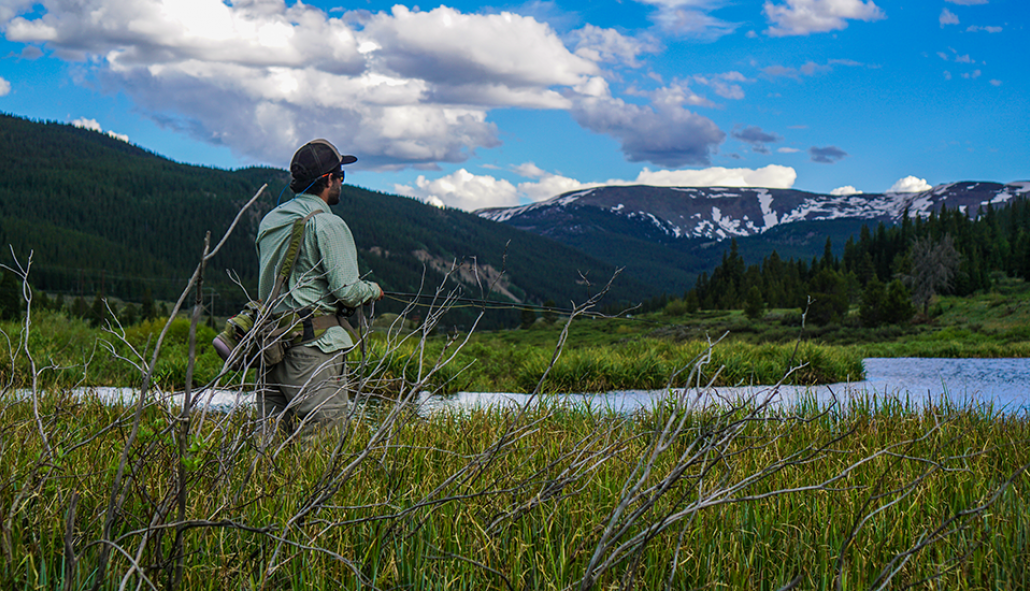 It's almost July, how is your sandal tan looking? Mine, you ask? Well, I wouldn't call it a tan...but there's certainly some definition. Red is a good descriptor. But, I suppose that's what not wearing sunscreen, when you fish from sun up to sun down, does to a man's feet. There are worse ways to sunburn your feet, like not fishing. Frankly, for me, wearing sandals and flip flops full-time means we are entering the beginning of true summer fishing and the flows on our rivers certainly agree. We've seen some pretty significant drops in flows and with that increases in water clarity and bug activity. There's no better time to fish big dries and big streamers than falling water in July on our freestones. So, with a super extended holiday weekend on the horizon, July 4th is a great time to share the water with friends, family, cold beverages, and good fishing. Weather looks very favorable, with highs gradually climbing from the mid-70s to the mid 80s by Independence Day. If the weatherman runs an honest business, you should expect some cloud cover on Sunday, but generally we will be basking in that ever present Colorado sunshine, all weekend.

If you're headed into the mountains to camp and explore, I'm sure you already have your camping site already picked out. But if you're staying around town, here are my thoughts on what should be fishing well this weekend, relatively close to town.

Upper Arkansas River - While the Upper Ark is still flowing at a pretty reasonable clip, falling and clearing water on the Ark means one thing...or maybe two...or three. Golden Stones. Yellow Sallies. Green Drakes. Big, fluffy, dry flies tossed into the softer, slower water should result in some entertaining takes. Just remember to pause before you set on that dry fly eater. It's hard, I know. Sometimes, it's impossible. So, at least bring a friend along who can light you up with a dig or two when you miss that take. If dries aren't the ticket, fish the Dirty Bird, Hot Head Squirrel Nymph, or your favorite chartreuse caddis imitation and a stonefly as a dropper in the same likely water and set on any twitch. Oh yeah, and it's the Arkansas, so, don't forget about streamers. Fishing the Arkansas this time of year can be productive in all three phases. While the fish in the Arkansas might not grow to the size of some of our other favorite freestones, brown trout are going to brown trout, especially when they have a short feeding season and long winters. Anything with flash tends to light up it's fair share of trout on the Upper Ark. Off the water, hit the Rapids & Grass Fest in Buena Vista for some bluegrass and craft brews during the weekend.

South Platte at Deckers/Cheesman - Old reliable. It sure is hard to quit Deckers. The closest Gold Medal water to Denver is always a great option and with flows holding relatively steady around 300 cfs, both sections of the South Platte have been fishing exceptionally well. While big ticket items like leeches, scuds and stoneflies are definitely worth fishing, don't forget to focus on throwing caddis, PMDs, and even some Trico nymphs, as well. With all these offerings in the water column, it's no surprise that we've been getting reports of some dry fly action on the South Platte. Be prepared with appropriately sized Parachute Adams and Elk Hair Caddis...or whatever dry fly you have full confidence in. Summer days are only getting shorter, so take advantage of the long days while we have them and fish early in the morning and late into the day, if you're looking to get away from crowds.

Upper/Middle Colorado River - Flows on the Upper Colorado River at Pumphouse have dropped nearly 2000 cfs in the last five days. The Upper C is half the size it was earlier this week. The Colorado is dropping and clearly quickly. That should be music to any angler's ears. Throwing big foam chernobyls and caddis, stonefly, and PMD droppers will be the hot ticket this weekend on the Upper C. Make sure to stop by Trouts Frisco and swing by Outer Range Brewing to grab a couple of their newly canned beers (if they have any left on hand) on your way up to the Colorado to get the most up-to-date report available.

Rocky Mountain National Park/High Mountain Lakes - So, runoff has peaked...and flows on our rivers are dropping. That means the high country is starting break free of those pesky winter chains. With the snow leaving the mountain tops, that means high mountain lakes are icing off and high country brookies and cutthroats will be putting on the feedbag in the early season. Whether it's a day trip or a multiple day hike into the backcountry, exploring those less-explored areas with a fly rod is never a bad decision. Bring scuds, leeches, hare's ears, pheasant tails, terrestrials, adams, and the like. Generally, these fish aren't too terribly picky, but it's fishing.