Why You Should Join Trout Unlimited 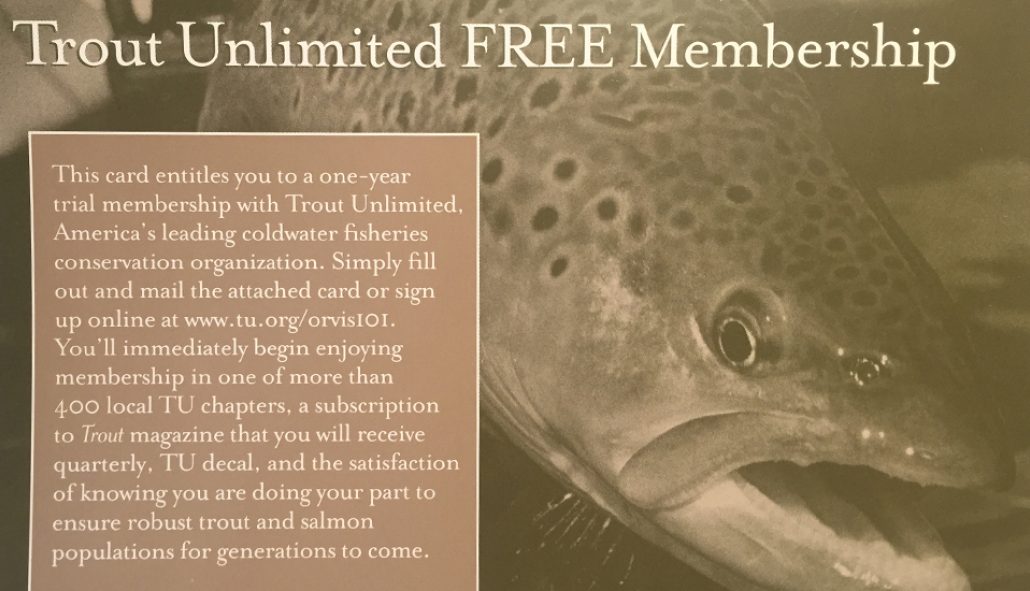 Whether you live in the North, South, East or West, one thing remains the same- year by year, water becomes more and more of a premium. The way I like to think of it is this way-- there is only a finite amount of water out there, yet there is a significantly growing number of humans on this planet who need water to survive. So where's it going to come from? How are we going to manage an increase in demand for a certain resource, when the amount of that resource is not also increasing?

From growing urban environments continuing to increase their water demand, to dismal snow packs affecting certain regions of the country, the growing stresses on our coldwater fisheries is a very real threat. Regardless of where you stand on the political side of the spectrum, I'm confident we can all agree on the fact that the trout we all cherish can't defend themselves.

So who's going to?

Trout Unlimited has been around for over 50 years at this point and is the only conversation group in the country devoted solely to protecting our coldwater fisheries. And while it would be hard to find an angler not familiar with this organization, the fact remains that there are countless anglers out there who do not belong to TU, even though I know they'd be devastated to see their favorite little trout stream go by the way side.

Trouts Fly Fishing has long been a business member of TU and a proud supporter of protecting our aquesous resources here in Colorado. You may have even seen us at some events around town, or perhaps read about it in a newsletter, where we handed over yet another giant check to Defend The Upper Colorado River- our shop's primary conservation focus. Over the years we've raised and donated over $10,000 to this great cause, doing our part to ensure happy, healthy fish are waiting for you each and every time you step foot or launch a drift boat on this legendary river. TU has taken note of our continued efforts and it is with great excitement we were recently awared the designation as a Gold Level Business Member within their organization. This makes Trouts the one and only fly shop in Colorado to receive this prestigious recognition.

Additionally, I recently sat down with a name we all know- Kirk Deeter, editor of Trout Magazine- to chat Trout Unlimited. Some of the facts he shared were quite impressive and if you aleady are a member of TU should give you a little pride in knowing your donations are making a difference. If you're not a member, it would the following should do a darn good job in changing your mind.

"When TU asked me to edit TROUT magazine, I couldn't say no. Because, over the years, I've learned that none of what I do or cover… no stories about fishing… no magazines… no rods or other gear… no Film Tours… or blogs… or even fly shops, would exist without the water and the fish. Minus the water, there are no fish. Minus the fish there is nothing."

"Over 80 percent of the fly-fishing world (in terms of commerce) revolves specifically around trout."

"Most anglers either started with, or still primarily focus on trout. There would be no flats lodges in Belize or the Bahamas, were there no trout streams in Michigan, Montana and Colorado."

"There is no organization in the country that that has the specific focus on the waters that make trout and salmon fishing possible, and the national bandwidth and boots-on-the ground capabilities, like Trout Unlimited has."

"TU has grown from a several million dollars-a-year organization to a $50 million-dollar (annually) organization within the past 15 years. TU has over 200 staff members in locations throughout the country. No conservation organization has the boots-in-water that TU does."

"Over 85 percent of all dollars donated to Trout Unlimited go directly into programs and projects that make trout fishing better."

"It's ultimately about the fishing. That's what a group of anglers in Michigan had in mind in 1959 when they formed TU, and that's an important part of TU's presence to this day."

"You may not agree with every stance, every project, and every policy decision TU makes or has made (I've had differences over the years myself), but there are very few, if any, places in the country where you can go trout fishing, and not realize the direct or indirect benefits of something TU has done.
And there's a lot of stuff still going on. It's more important now than ever to be engaged."

Still not convinced? Then how about taking a glance back at the image at the top of this post. See that card?

That's right everyone- as part of our Gold Level Business Member status, we are able to offer anyone who is not a member of TU a FREE 1 year membership to this great organization. Swing on by the shop, fill out the card, and we'll get it sent in for you. As I've been known to say in the past- It doesn't get any easier than that!!

Thanks again for your consideration to join, or continuing to support, Trout Unlimited. I know the trout feel the same way as well.