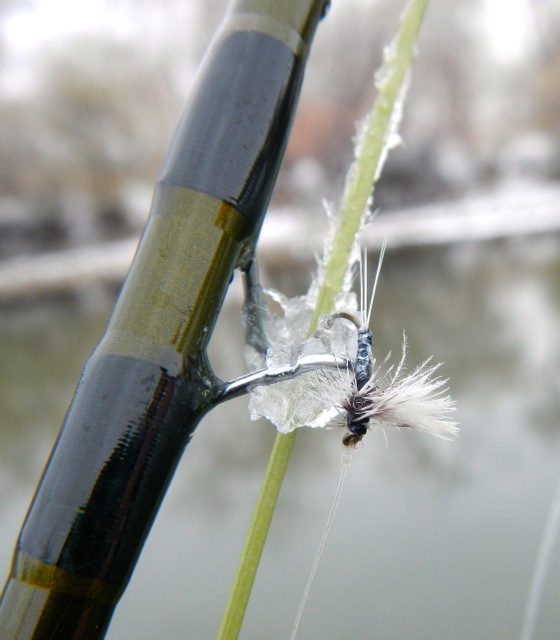 "Thanks for inviting me out today gents, I'm pumped to fish some new water," I said as we began pulling piles of gear out of the car not far from the banks of the Arkansas River. Working in a shop, I get a lot of invitations to fish from clients but I rarely get to take people up on their offers. When I received the email from a couple of guys I had met at a Denver Trout Unlimited member meeting a few years ago, I decided to make it happen.

With the weather in the Front Range in full-on winter mode, we decided it was probably best to hit a tailwater within ~2 hours of Denver. With parameters like that, we had our choice of options – the Blue River near Silverthorne or the South Platte River near Deckers or Cheesman Canyon, just to name a few. Based on reports from anglers who had fished the water recently, we decided to try our luck on the Arkansas River near Pueblo.

Both Jeff and Scott had fished this section of the Arkansas prior. They brought another buddy along and both he and I were in the same boat - newbs. Chad wasn’t just new to the Ark, he was new to Colorado and fairly new to fly fishing. The weather was crisp and cold with a blanket of fresh snow on the ground. We also found what I love about winter fly fishing in Colorado the most: there was not a single car in the parking lot when we arrived.

The plan was pretty simple – we were to spread out and work our way up the river toward the dam. We carried two rods each – a dry fly set up and a nymph rig. Our hope was that with the heavy cloud cover the baetis hatch would come off in full force later in the morning. As we worked our way back down, we would throw streamers. The game plan was set.

"We were talking about it,” said Jeff on the walk to the river. “Sometimes it is cool to fish with new people. You learn new stuff."

I was in total agreement - happy just to be fishing and exploring a new area that I had never visited before.

I sat for a few seconds on the bank just watching the water. It was still pretty cold and steam escaped the river’s surface. It was also calm and quiet. The clouds hung low and the air was damp. When I shifted my weight I could hear the snow crush beneath my boots. The river flow on the day we fished was right around 65 CFS and the temperature of the water bounced around 48 degrees.

Very sporadically, I would see a fish rise – but nothing consistent.

No foot prints in the snow? A good sign.

When I took a look at the snow on the bank, there were midges still fresh and twitching. 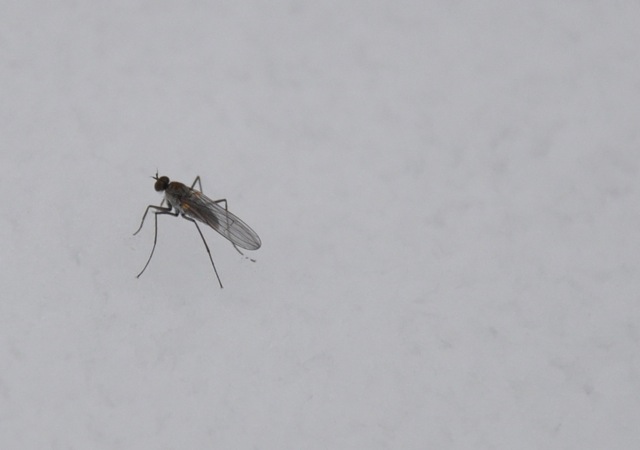 Without seeing any consistent rises I decided to throw the nymph rig – a red San Juan Worm and Black Rojo midge. My rig drifted maybe 15 ft in the slow run before the fish took it downstream.

‘The Kiss Of Death.’ Although it feels good to catch a fish on the first cast, I’ve come to rue the occurrence as a bad omen.

Turns out the fish in this section of the river aren’t as superstitious as I am or they just really like the red worm. Both rainbows and browns were eager on the San Juan Worm. The Rojo Midge and the Tube Midge all produced results early on as well. 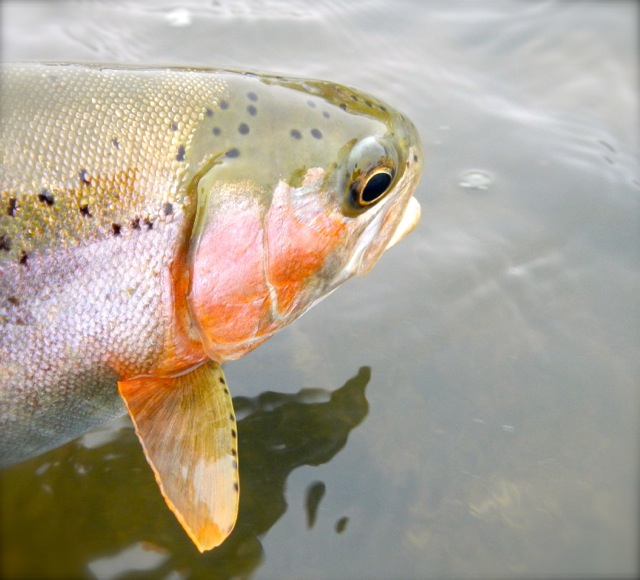 Around 11:30am the baetis started to crack off – just like clockwork. Fish started rising consistently and natural adults were easy to spot on the surface. By noon, they were piling up in slow water. We found fish moving up from slow deeper trenches into faster moving riffles that were transformed into chow lines. The hatch and surface activity would ebb and flow – one minute it would be feeding frenzy and the next… crickets. 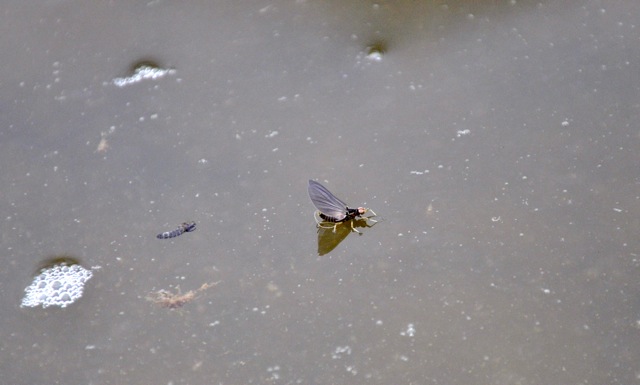 I struggled for a good amount of time trying to find a bug that would work – it was harder than it should have been. I kept changing bugs, casting, and squinting trying to find my size 20 adult and size 22 emerger in the flat light. The whole time, a voice in the back of my head was telling me “switch to 6X fluorocarbon… switch to 6X fluoro...” After about 20 minutes and seven or 8 bug changes I finally heeded the internal call – and promptly hooked a fish on my first cast with the more technical tippet.

I had fish eat a High Vis Parachute Adams #20, the RS2 emerger #20 and some of the other guys had luck with Quigley’s Sparkle Dun (size #18).

This fished crushed a.... 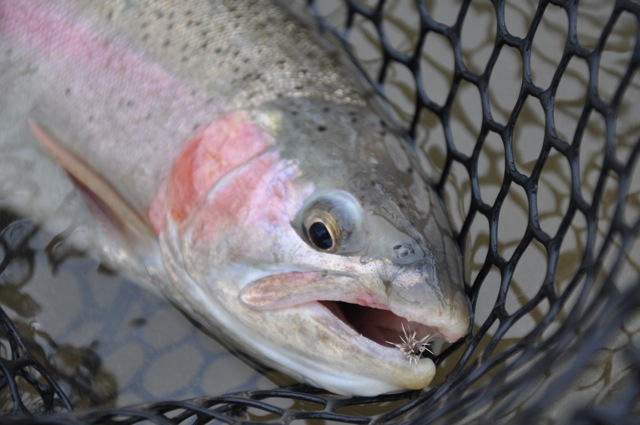 I came across Chad, the other guy who had never fished this section of the river before, and Jeff downstream working a small spill over with rising fish. Jeff was helping Chad make small adjustments to help tighten up the accuracy of his dry fly presentation. It was cool to watch two buddies work together with good results. 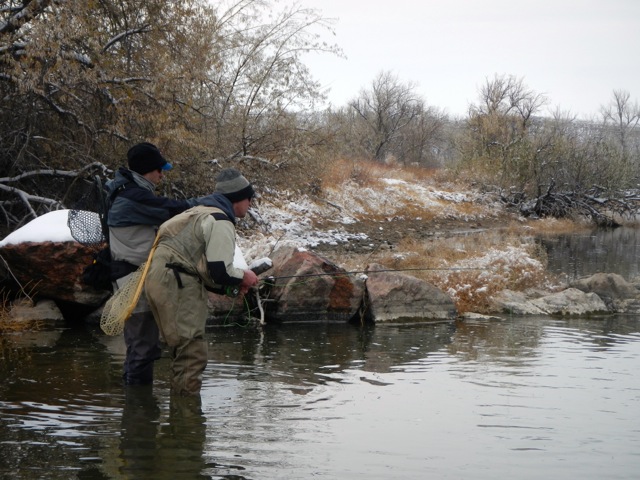 “Good,” said Chad, he seemed pretty excited. Chad had moved recently from Illinois to Denver. “Hooked a bunch of fish. Brought in a couple of rainbows... a few browns.” 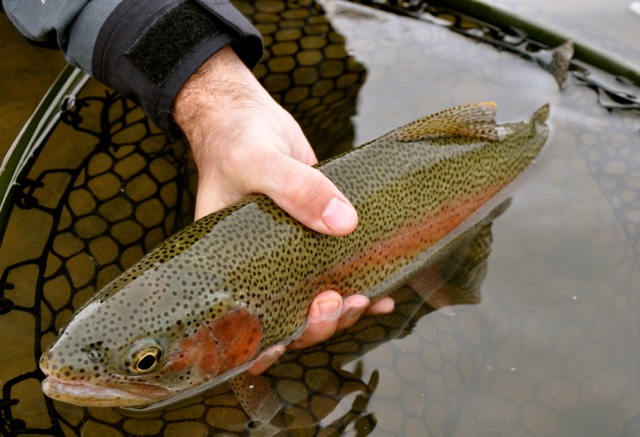 “Nice,” I said. I hadn’t hooked a brown all day myself.

We continued to head back downstream, I threw streamers will sub par results.

As we approached the car Chad still seemed pretty jazzed on the day even though the rising fish had dissipated and the pace of the fishing had slowed. 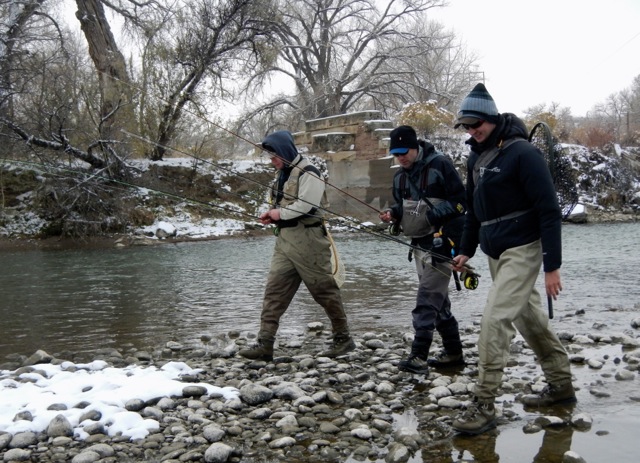 "This is pretty sick guys. I had no idea you could have this kind of dry fly fishing in the winter,” said Chad as we made our way back to the car. “I mean... if I was still in Chicago... I'd just be pissed. I'd know it was going to be cold for months - with nothing to do. We get to do this? The ski season is just getting started? We can still hunt? How cool is this?"

And again, I was in total in agreement.

Sometime you get to learn new things on the water that help your fishing. Other times you pick up new ideas where or how to fish. Sometimes you are just reminded of the very simple reasons of why you fish. 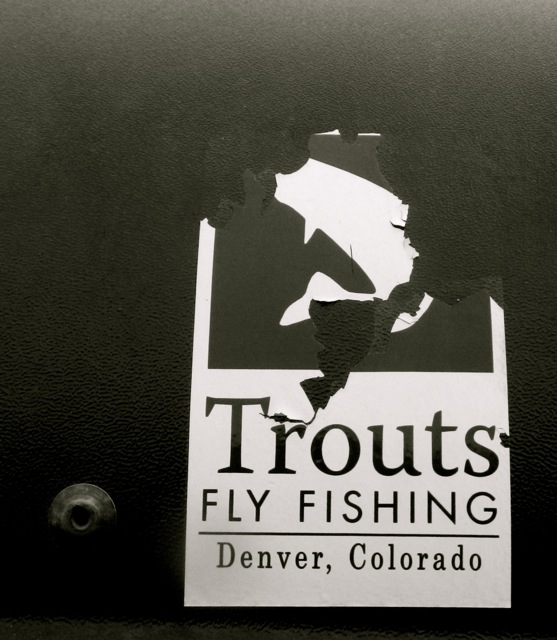