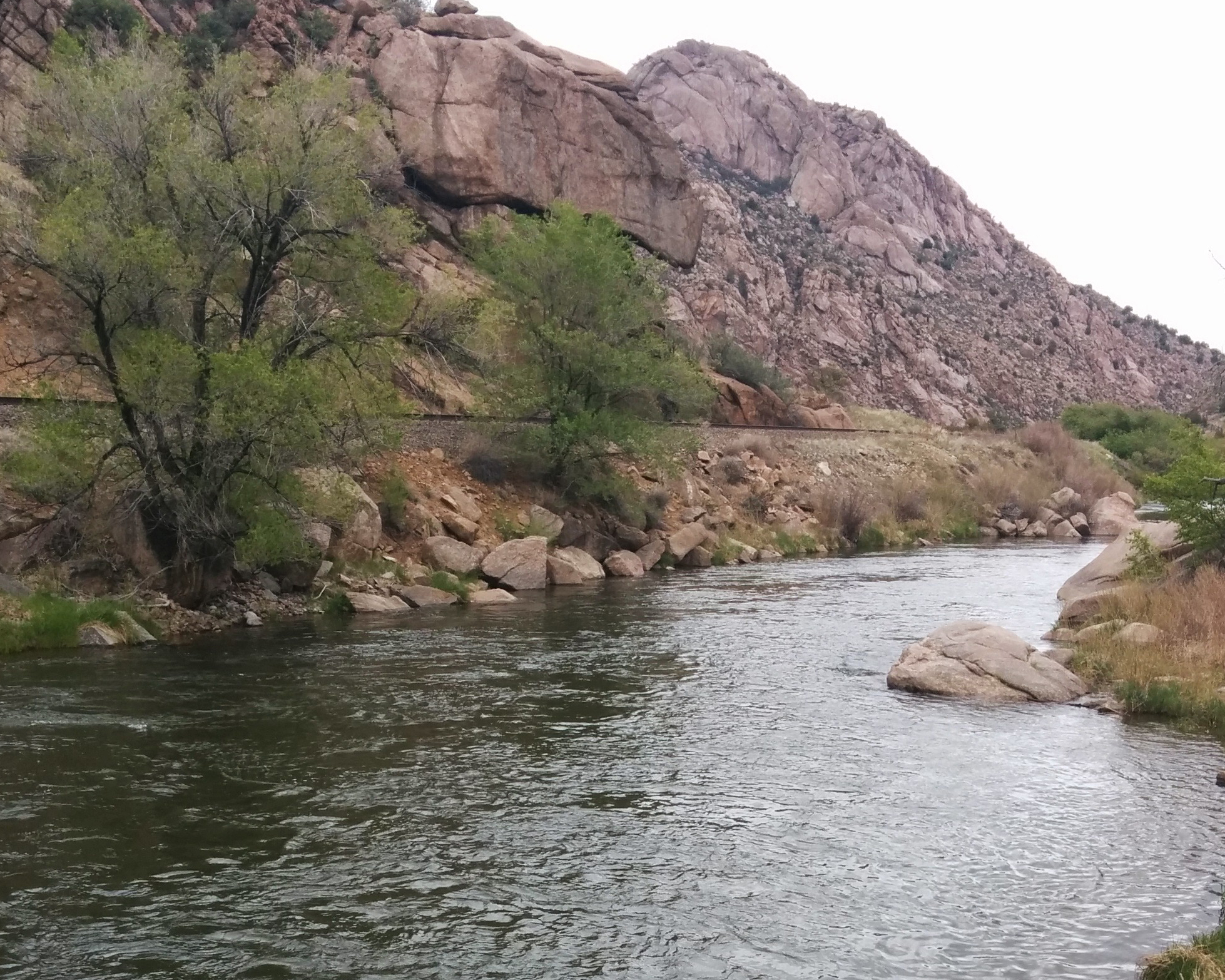 Flows at Salida are now at 265 CFS. Fishing nymph rigs will be key to success. Size #16-18 Caddis and BWOs, and #18-24 Griffiths Gnats and Parachute Adams have been our choices for dry fly fishing. For your nymph rigs look to use: Small Stones #12-16, Worms #10-14, Eggs #12-14 Caddis #14-18, and Bead Head Nymphs Size #14-18. These will all work great for heavy attractor patterns. Throwing a small midge/baetis pattern in sizes #18-22 behind the attractor is a good approach. Fish are readily eating attractors when presented at the proper depth.

The section of the Arkansas River is what most people refer to when discussing fishing The Ark. Located along Hwy 50 between Canon City and Salida, this 58 mile stretch of Gold Medal water offers anglers the total package when it comes to a Western fly fishing experience. A freestone river in every sense of the word, anglers have the chance to fish for both rainbow and brown trout using everything from dry flies, nymphs and streamers throughout the day. While a very wadable stretch of river, this section is also popular amongst float fishing anglers as well. From a fish-mix standpoint, the lower section near Canon City has a healthy population of brown trout in the 12-16" range. The further west you head towards Salida seems to be more "rainbow" water. Fishing around the deeper pocket water and boulders can produce some hard fighting rainbows that grow in excess of 20". The beauty of this river is that due to the vast amount of public water availble it almost never feels crowded. An angler can almost always find multiple stretches of river to have all to themselves.

Fall fishing on the Lower Arkansas can be some of the best of the year. This section runs from Buena Vista down to Canon City. Weather in this stretch has a tendency to be fairly mild this time of the year gradually warming the closer to Canon City. As long as snow isn’t in the forecast, the Lower Ark is a great destination as late as December.

The majority of this stretch has been labeled “Gold Medal Water” by the state. Fish counts are near 5,000 per mile through this stretch with about a 70 to 30 percent split between Brown Trout and Rainbow Trout. The Brown Trout population is completely wild and self sustaining. The Rainbow Trout population is also a very healthy and can produce fish exceeding the 20 inch mark.

This stretch of River has an abundance of bugs, Caddis, Stoneflies, Baetis and Midges are all prevalent. Underneath the surface all these bugs will be active this time of the year. Above the surface there will be sporadic Caddis coming off on warmer days as well as strong Baetis and Midge hatches. The Ark is famous for its October Caddis hatch but, many locals would argue the BWO hatches are the best. While the BWOs come of with more consistency in the Spring there are still some fantastic Fall hatches creating some great late season Dry Fly opportunities. Terrestrials are also a great option this time of the year and fish will rise to them as late as November.

As the weather continues to cool look for fish to begin to migrate towards the deeper runs. There will still be fish holding in just about any pocket near a rock but, look for greater numbers in the well defined runs. Look for fish to rise on warmer days from about 1-4 PM. When this happens don’t hesitate to turn to dries. Another thing to keep in mind are streamers. Streamers on days with solid cloud cover can produce a ton of action.

Some of my favorite stretches this time of year are Browns Canyon, Wellsville, in town of Canon City and anywhere along Bighorn Sheep Canyon.

River access is plentiful along Hwy 50 and countless "P" (parking) signs and pulloffs are available for the entire 58 miles between Canon City and Salida. There is some private property throughout this stretch of river, however these places are usually clearly marked and won't be cause for any shortage of fantastic water to fish. Several parking areas also have picnic tables and grills available for public use.